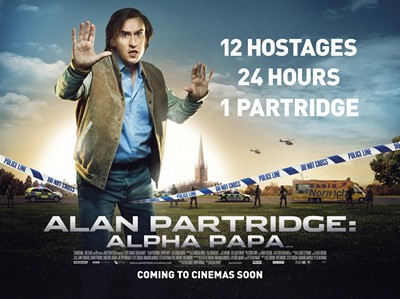 Adapting funny characters from TV to film can be a tricky business. For every brilliant translation like Borat, there are plenty more subpar attempts like Ali G Indahouse. Some characters just don't play well long-form, and others need more finesse than filmmakers are often willing to give them. Steve Coogan's self-involved Alan Partridge character has proven quite elastic over the past few decades, highlighting different TV, radio, and variety stage shows in the UK, as well as being the subject of the autobiography I, Partridge: We Need To Talk About Alan. (The audiobook version, with Coogan reading in character, is priceless.) Partridge on the big screen would seem to be a foregone conclusion, but that doesn't make the prospect any less worrisome. Also, considering the fact that the plot of Alan Partridge (subtitled Alpha Papa outside the U.S.) vaguely resembles the Brendan Fraser flop Airheads doesn't initially instill the greatest confidence.

Against the odds, Alan Partridge is damn funny and a damn good showcase for the long-running character.

Former TV chat show presenter and long-time suburban disc jockey Alan Partridge always keeps his mind focused on what is most important: himself. When the sleepy little radio station where he works is taken over and re-branded by corporate suits, he isn't all that bothered. Fellow DJ Pat Farrell (Colm Meaney) is a bit more unsettled, and he begs Alan to convince the new owners to keep the old codgers like themselves on staff. When Alan bursts into a board meeting and realizes that the suits are in the midst of figuring out whether to fire Pat or himself, he scuttles his original speech to support his colleague and makes it clear which way they should go by scrawling the phrase "JUST SACK PAT" in large red letters before awkwardly leaving the room. The suits take his advice.

Rather than take his lack of employment in stride, Pat returns to the radio station with a shotgun and holds everyone hostage. He decides to use Alan as his liaison with the police, and this little bump in importance immediately goes to Alan's head. The modest media circus that arises because of the siege gives the fame-hungry fool a gleeful chance to see himself on national television again. 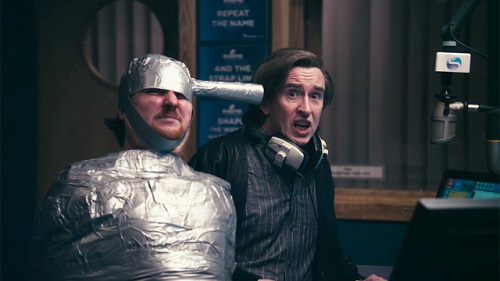 While the film occasionally plumbs a little thematic depth from its set-up, such as when Alan's longtime assistant Lynn (Felicity Montagu) reminds him that what's most important is the safety of the hostages and not how many channels he appears on, this isn't Ace in the Hole. The point is not to create hard-hitting satire of those who would profit off the pain of others; this is low-key, low-stakes mockery of a self-important coward and his ambivalent morality. Though the film is chock full of crisp, acerbic dialogue, the overall mood is fairly light. This carries over to the siege as well: despite a few moments of macabre humor with Pat wielding the shotgun, we're not kept on pins and needles as to whether he's actually going to start taking lives.

In fact, the whole dramatic core of Alan Partridge is a bit on the thin side -- and that's a good thing. Coogan and his co-writers (In The Loop's Armando Ianucci, plus Peter Baynham, Neil Gibbons, and Rob Gibbons) understand that we don't want to see Alan Partridge go on a journey or have a transformative arc (although naturally the film has a little bit of that in it). We want to see Alan worm his way out of awkward situations, only to land in far more awkward situations. If that means that the film can sometimes come off as a series of sketches or disconnected scenes, it doesn't limit the effectiveness of the comedy. The barrage of snappy verbal humor and slapstick-y visual gags yields a high hit-to-miss ratio. Many of the best moments -- Alan lip-syncing in his car to Roachford's "Cuddly Toy", or Alan getting caught by a photographer with his pants down and his privates tucked between his legs -- could easily stand alone outside the context of the film.

This probably was the best way to introduce Alan Partridge into cinemas, by focusing on stand-alone scenes and character-based running gags rather than fretting too intensely about the plot. Still, with a proposed sequel already in the works, one can't help but hope that Coogan and his writers figure out a way to take it up a notch and better integrate Alan into a more fleshed-out yarn, much like Python did with Life of Brian after the brilliant but sketchy Monty Python and the Holy Grail.

Alan Partridge is currently playing in select movie theaters and is available on VOD. 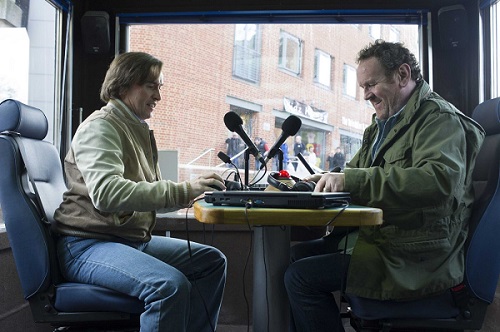