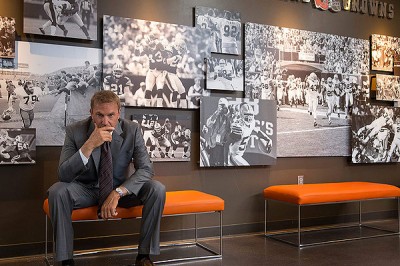 If it's possible to make the All the President's Men of football, Draft Day is somehow it. It's more "follow the money" than "show me the money," building a surprisingly vivacious narrative out of phone calls, back-room deals, and studying video tape. The filmmakers are chasing the success of Moneyball here, and are somewhat successful. If nothing else, it makes for an apt comparison. Yet, unlike Bennett Miller's film, Draft Day doesn't ever move out on the field, and though it's not necessarily the better flick for that decision, it is more fun.

Kevin Costner stars as Sonny Weaver, Jr., the General Manager of the Cleveland Browns. Sonny is a legacy in the Browns organization, his father having been its most beloved coach. The fact that Sonny fired dear old' dad, who then died within a year, should give you some idea of how junior is perceived. Legacy is important in this sport. We'll see other father/son pairings, while also exploring the notion of loyalty and sportsmanship as Sonny and folks around him grapple with unfinished business. Some of it ancient.

All the while, they will be dealing with new business, too. Sonny would prefer to keep attention on the events at hand. He has precious few hours before the draft begins, and he needs to have his pieces in place before the big to-do starts. The team owner (Frank Langella, Starting Out in the Evening) wants to see Sonny breathe some razzle dazzle into the ailing franchise and boost ticket sales. The coach (Denis Leary, Rescue Me) that Sonny had forced on him has his own ideas about a safe long game. There is a struggling quarterback (Tom Welling, Smallville) waiting to hear if he's going to get cut, while a trio of fresh-out-of-college rookies are hoping they'll be called up to join. Sonny has to gamble on who he thinks will win games and hopefully stay true to his own vision without pissing off too many people on his crew. Getting the team he wants involves vetting the players and striking deals with other GMs to get a better place in line to pick them...or to manipulate those GMs into doing what he wants so he won't need their spots. 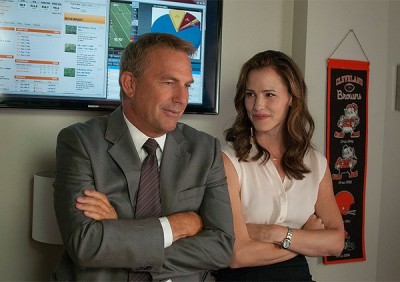 As the day wears on, it all gets pretty tense--for Sonny and the players and everyone watching. Draft Day's story occurs in a little under 24 hours. To stir the pot further, the writers, rookie Scott Rothman and occasional Nurse Jackie-contributor Rajiv Joseph, throw some added personal crises at Sonny. His secret office romance with the team accountant (Jennifer Garner, Dallas Buyers Club) may be heading into its own championship season if Sonny doesn't fumble: he just found out she's pregnant. Also, Sonny's mother (Ellen Burstyn, The Last Picture Show) has her own concerns abou the Browns, her son's life, and everything.

A lot of Draft Day succeeds because of how things happen rather than what happens. Many of the swerves in the plot are easy to spot, but it doesn't matter. Director Ivan Reitman (Ghostbusters) has created a drama that is surprisingly light on its feet. In order to keep all the walking and talking from becoming static, Reitman uses a lot of split-screen effects, including having characters pass across different fields of view, blending and stacking the frames within frames to match the activity. Texting and other modern communication conventions are also put to use. The way a message is received depends on its delivery. This means that regardless of what the folks in front the camera are talking about, Draft Day is always interesting to look at.

That said, the movie would be nothing without a charismatic lead. Draft Day is very much Kevin Costner's show. This is where the actor's campaign to remind moviegoers how much we all liked him solidifies. (Admittedly, it helps that Draft Day is a much better overall package than Jack Ryan: Shadow Recruit or the abysmal 3 Days to Kill.) Costner makes Sonny a charming everyman, whip-smart and determined, but also flawed. He is a man with principles looking for a way to hold on to them, mortgaging his future on some risky propositions. Given that it's Costner, there's never any real doubt that he'll do the right thing, but that doesn't mean you won't still be rooting for him.

Draft Day is the first real surprise of 2014. It's strange that this wasn't pushed out closer to the actual football season, especially as the Seattle Seahawks play a major part in the plot. You'd think the moment that team made the playoffs, the studio would have scrambled to move Draft Day up the roster. It doesn't matter if you can't remember the excitement of a couple of months ago, though, because you don't have to be a football aficionado to like the film. I'm not really a sports fan in any capacity, and I still pretty much loved it. 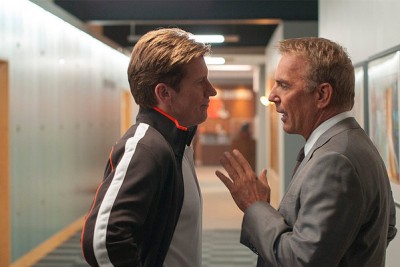