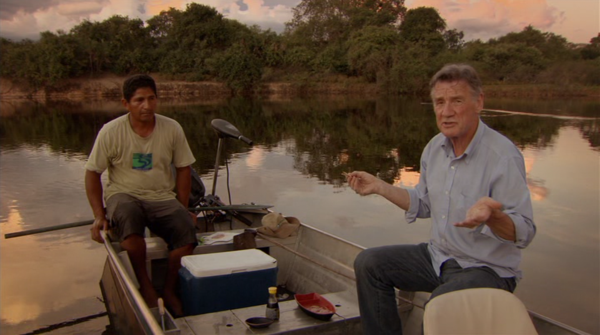 I know what you're thinking: hasn't Brazil been "with Michael Palin" since 1985? Why make a special designation now?

But no, dear friends, this is not a bizarre double-dip of Terry Gilliam's dystopian classic with a unique focus on the character of Jack Lint. Instead we have a BBC travelogue hosted by the ex-Monty Python star. Palin's televised globe-trotting began around 25 years ago with Around the World in 80 Days and its follow-up Pole to Pole, and it has continued through another half-dozen or so TV events in the intervening years. Somehow, in all of his travels, Palin missed out on Brazil, an omission that is remedied over the course of four hour-long episodes.

Palin's journey takes him from the northeast of the country, down the coast, and then back up and around -- with a few random trips further inland. The first two episodes have a fairly typical travel-program feel, with Palin witnessing local religious customs, admiring some architecture, and sampling local cuisine. It's not uninteresting, but the segments frequently force Palin into a straight-man reporter role, asking leading questions of the people he meets, presumably fishing for answers he already knows. It doesn't help that many of the people he interviews insist on using their limited English vocabulary.

Nonetheless, these first episodes have plenty of interesting segments. Palin visits a number of remnants left by those who tried to make their fortunes using Brazil's resources, such as castle ruins left by rubber barons and the abandoned factory at Henry Ford's failed prefab city Fordlandia. He visits with indigenous tribes who have varying levels of contact with modern society; one tribe has started using digital cameras to document their way of life and the oral history of their elders. He makes doddering old-white-man attempts at participating in local activities, like an African-influenced drum corps and a capoeira class. When speaking to a religious leader who is also a fortune teller, Palin can't resist asking if England will ever win another World Cup (unsurprisingly, the outlook is not good). 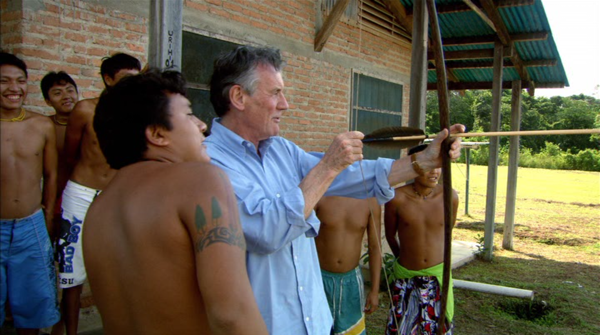 In the later, southern-set episodes, Palin gives himself a little more time to elaborate on the thesis he makes in the opening narration to each episode, in which he characterizes Brazil as a burgeoning global superpower. These last two episodes still have odd little stand-alone segments -- such as a visit with a farmer who has a mutant cow with five legs, two vulvas and two anuses -- but Palin seems most interested in seeing how Brazil is rebounding and growing from its contentious past.

The third episode spends more than half an hour covering Rio de Janeiro and the outlying favelas (shantytowns), but not in exactly the same travelogue mode as before. Palin visits BOPE, the law enforcement agency that battles drug traffic in the favelas; he visits with an English expat who has set up a boxing club for kids in one of the "unpacified" areas; he even goes to the Gay Pride parade with a transvestite activist who describes how the millions-strong event originally consisted of only a few dozen people who would get things thrown at them and who would often not even make it to the end of the parade. Palin doesn't make any grand political statements in his narration of this material, but the fact that it gets included at all, in and among the silly bits about love hotels and coffee-making, makes it feel like he and his producers made an effort to go a little deeper than the typical tourist-board vision of Brazil.

The final episode is a fairly delightful mishmash that covers everything from aircraft building to telenovela production to garbage picking. At one point, Palin visits the German immigrant town of Blumenau, whose inhabitants include wannabe fashion models in the Gisele Bündchen mold and sentimentalists with a fondness for putting on traditional attire and performing old-timey rituals that appear like they were stolen from one of Palin's Python sketches (seriously, I expected them to start slapping each other with fish).

A little too much of Brazil with Michael Palin is interesting or pleasant without being truly enlightening or engrossing. Palin is a charming presence as always, so he manages to keep the program watchable even during the dead spots. But, even with its interesting detours in the later episodes, the show feels a little like a guided tour where you keep getting pushed along without truly getting the flavor of the place you are visiting. 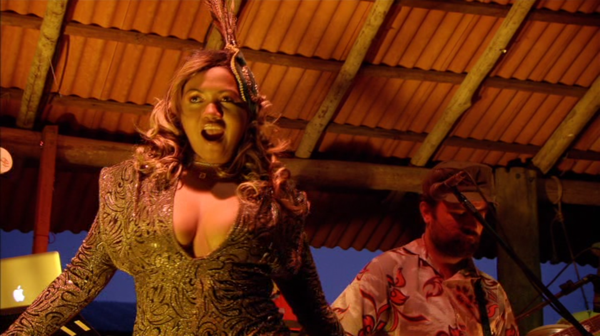 The Video:
All four episodes have been squeezed onto a single DVD, which seems to have had a less-than-beneficial effect on the program's widescreen 1.77:1 image. Though the documentary footage looks well-shot, with vivid colors and a generally strong level of detail, the DVD encode is frustratingly inconsistent. Wide shots with many moving elements or shots with sharp contrast (like a silhouetted person back-lit by the sun) will invariably have lots of ugly compression artifacts and aliasing. They clearly needed to try another kind of video compression or to have just bitten the bullet and put these episodes on two discs.

The Audio:
The disc offers a perfectly clean and satisfactory Dolby 2.0 stereo audio mix, plus the option of English SDH, which is helpful for deciphering some of the more thickly accented speech in the program.

Final Thoughts:
Brazil with Michael Palin is a colorful, entertaining, and sometimes surprising journey around the fifth largest country in the world. It's not quite as excellent as many of Palin's prior travelogues, but it has enough good bits spread throughout to Recommend it. 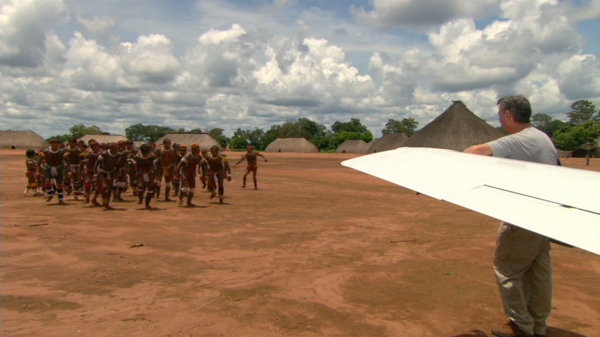