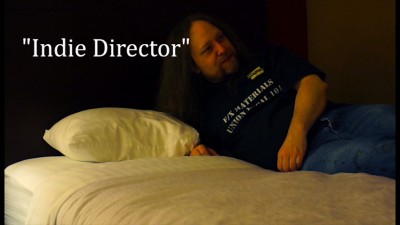 
The Movie
The general populace certainly doesn't appreciate the art of film editing, but even those who are avid theater-goers tend to ignore its importance. Names like Thelma Schoonmaker, Angus Wall and Dylan Tichenor don't mean a lot to most people outside of the industry, but they mean a lot to the power of films like Raging Bull, The Social Network and Magnolia. Like a defenseman in hockey, an editor isn't really noticed unless they aren't doing their job well. Well, if you ever need to explain the value of good editing, you could pull out a copy of Indie Director. It would probably be the only reason to own it.

Written and directed by self-proclaimed "King of the B Movies" Bill Zebub (get it?), Indie Director follows Bill's fictional exploits in trying to get his new film, "Raped by a Rapist," made. The problem is, he has no money to do so, and as a filmmaker who makes horror comedies, he doesn't sell enough to draw investors. So the whole thing becomes a heightened education in the making of an indie film, especially from a financial perspective. Bill's struggles with retail, distributors, investors, actresses and fans continue to pile up, with only his consistently thigh-highs-and-garter belt clad girlfriend by his side (unless she's on the toilet, which happens frequently.) 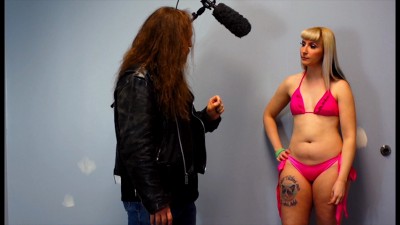 Somewhere in here may be some good insight into how difficult it is to be an indie filmmaker (the financial angle rings true, though I don't have experience from that side), but the sacrifices one has to make to reach that insight are not nearly worth it. Awful jokes on the part of Zebub, told with no salesmanship, land dead on arrival, he has the dumbest running gag involving his cell phone, and the overwhelming amount of nude or topless women actually manages to become overkill by the second or third time Zebub is fondling a heavily-tattooed breast. Your own view of Zebub and/or his character will determine any tolerance you have for this film, as his terrible one-liners and catchphrases (ex: "Laurel and Hardy har har") come non-stop and are often repeated several times throughout the movie. Meanwhile, an odd homophobic slant becomes dominant at times for no particular reason, and the acting overall is just this side of a Corky St. Clair production, as lines end awkwardly, and flubs are just ignored in favor of motoring on.

As mentioned before though, the film's biggest sin is the editing, or, more to the point, the lack of editing. The movie runs over two hours long, with many scenes just lingering on for more tepid jokes and unnecessary nudity. If, as mentioned at points in the movie, these are intended to be masturbatory aids, there are many other places to find such material, and far more effective material at that. I'm not sure how much of a script there was for this film (much of it, at least on Zebub's part, feels like off-the-cuff ranting) but a judicious amount of cutting at that earlier stage could have given a solid editor a chance at pulling together a watchable film. That's certainly not the case here. If this wasn't being reviewed, it would have been ejected after 10 minutes. 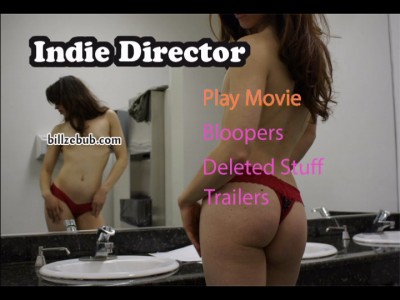 The DVD
The film arrives on one DVD, which is packed in a standard-width keepcase. The disc features a static, full-frame menu with options to play the film and check out the extras. There are no audio options and no subtitles.

The Quality
Though a note during the credits insists the film was intentionally shot poorly, it looks more like a mediocre indie production, with random white balancing, noisy dark patches and an overall shot-on-video look that screams amateur. Color can be bright and attractive when captured well, but overall it's a touch muted, while there's a paucity of sharpness overall.

The Dolby Digital 2.0 audio track is rough and overmodulated, which speaks to how it was recorded more than anything. The death metal soundtrack is overbearing when present, but the dialogue is consistently audible and easy to understand.

The Extras
Up first are 13:49 seconds of deleted scenes. It's amazing that there's something that didn't make it into the movie. Once you hit the 2 hour mark, why not go for broke? Here you get, surprisingly, more nudity, along with a few longer takes from scenes in the movie, including one featuring one of the previously topless girls fully clothed. No wonder it was deleted.

Then there's an epically-long blooper reel that checks in at 21:53, which starts with a few on-set farts, before moving on to falling boom mics and various screw-ups. There's also more nudity here than in all other gag reels in history combined. Try to see how long you can make it through before you consider picking up your remote.

A 10:51 reel of trailers for other Bill Zebub movies wraps up the extras, and includes Jesus, the Daughter of God, The Worst Horror Movie Ever Made, Zombiechrist, Rap Sucks, Night of the Pumpkin, Jesus the Total Douchebag (featuring the late Oderus Urungus of Gwar), Dirtbags and the seemingly rape/torture-focused Breaking Her Will. Somehow, I have no interest in exploring these films further. 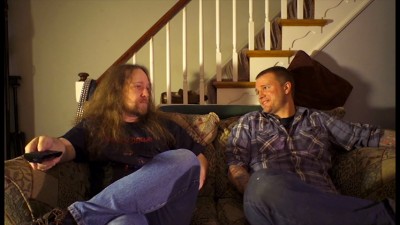 The Bottom Line
This film is dreadful, but there are elements in here that could have made for something interesting, as there are plenty of (seemingly) important points about the business of independent filmmaking, along with the potential for humor in Zebub's outlandish persona, but more than anything, he needed an editor to make it worth slogging toward these bits of goodness. As it is, it's pretty painful to sit through, and the bonus features is just more to struggle with. It takes a special soul to make it to the end here, so perhaps as an endurance challenge or punishment for friends this could be worth watching, but for any other purpose, just try something else. Anything else.