Please Note: The stills used here are taken from standard-issue DVD included in the Criterion combo, not the Blu-ray. 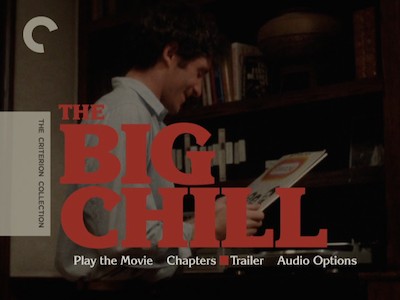 I spent yesterday watching a couple of Woody Allen movies. Though they were from different parts of his career and set in different time periods, both showed the idly rich and overly liberal indulging in all manner of impossible and ridiculous behavior. In a lot of ways, Woody Allen characters are the kind of delusional upper middle-class bozos that most of us should really turn our backs on, their lives so separate from the average filmgoer that we can never hope to identify. Like a Vanity Fair article with punchlines.

And yet this somehow works for Woody. In a way that otherwise escapes someone like Lawrence Kasdan, even though he has the same out-of-touch attraction to the type of people he might rub elbows with but whom the vast majority of us will never meet or, if we do, actually want to spend time with. Is it that a Woody Allen movie like Everyone Says I Love You or even his latest doesn't attempt to sell us reality, but instead entices us with the notion that we can peek in on a fantasy world where everyone is smart and says pithy things and has jobs that very few might actually have? In his world, a sarcastic writer is on staff at the New Yorker; in Kasdan's, Jeff Goldblum writes for (the) People. But he feels sick about it. Except he doesn't.

Perhaps it's too late for me to finally see The Big Chill. I mentioned this to one of my colleagues, and he said, "But aren't you a big fan of Grand Canyon?" And, yes, I am, I have a soft spot for Kasdan's next ensemble drama, but I'd also wager it's been since 2001 that I last viewed the 1991 film, back when it was released on DVD for the first time, and I recall thinking that it was already showing its age back them. Yeah, yeah, sure, we're all connected. One life flows into the next. That was Kasdan welcoming us to the 1990s.

Whereas The Big Chill is fully set in the 1980s. Released in '83, it is an apology for the Baby Boomers, an attempt to find soul in the infamously soulless decade. That's why the music is all taken from the 1960s. No synthesizers are to be heard on this soundtrack--which famously established the notion of a moneymaking compilation album, impossible to replicate today without spending wads of cash, and yet ironically ignoring that many of its featured players, including the Rolling Stones and Steve Winwood, were not faring so well in terms of integrity on the time of release. Call me crazy, but I'd prefer a John Hughes movie any day. Sixteen Candles was only a year away, was as '80s as you please, and still looks as young as its characters some three decades later. Plus, screw you, the music is awesome and forward-thinking.

Whereas The Big Chill has the same desperation of its thirtysomethings on their way to a mid-life crisis. Which I'm in the middle of, so maybe that's why I can't understand what they are whining about. Like I said, it's too late for me to have empathy with these well-off nostalgia whores. I just can't. 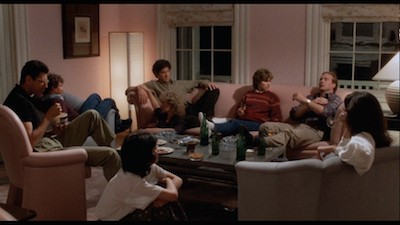 Which doesn't meant I can't appreciate or even enjoy The Big Chill. As a time capsule, it's fairly illuminating. As cinema, it's a precious snapshot of many fine actors at an early stage of their careers. Kevin Kline, Glenn Close, William Hurt, and whatever happened to JoBeth Williams? Tom Berenger serves as a good parody of Tom Selleck, and Jeff Goldblum is laying the groundwork to be a parody of himself--and frankly, is the worst thing in this movie, the conduit for his auteur's most sardonic and ultimately flaccid bons mot. Yet, as period-specific ensemble pieces go, I actually enjoyed The Big Chill a hell of a lot more than Nashville, the appeal of which largely escapes me. I also prefer Tim Burton's second Batman to his first. It's all about expectations.

For those who somehow missed this cultural touchstone--or maybe blocked it out of their mind, realizing it was for the old folk, because like me you were 11 when The Big Chill was first released--Kasdan's movie takes a look at a group of college friends who have reunited after many years because one of their own (Kevin Costner, whose face is never seen) has killed himself. This starts them on an existential path where they play at a lot of denial before eventually digging into some of their own emotions. Amidst it all, they casually take some drugs, listen to old records, and talk about how good they have it. (Kevin Kline's insider trading was treated as a running gag; Gordon Gecko was still four years away.) Except if you really look, they don't dig deep at all. Their self-reflection is pretty shallow. Don't hold your breath waiting for William Hurt's character to ever tell you what he saw in Vietnam. It's enough to know that he went, we can't ever really hear the gory details. Psychology means evoking Freud, then downing the rest of your merlot.

And yet, again, I must stress, The Big Chill is an enjoyable movie. I don't think it's a very good one, but it's pretty easy to watch. Nobody really says anything offensive, they're too busy living lives that are offensive. Because these folks are meant to be real, they are representative of their time, and not some recollection of a literary dream that their write/director once had. Lawrence Kasdan, unlike Woody Allen, has no idea how tiny his sphere is. These are his people, and he is them. And I'm guessing it makes for a relatively accurate representation of how people lived--or at least, wanted to--while Reagan was President. As a museum piece, The Big Chill is fascinating; as vital drama, it's as cold as the title implies. Just know that going in, it might just keep you from leaving the party early. 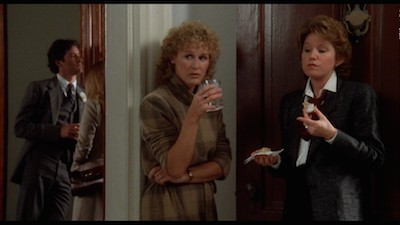 Criterion does a nice job of restoring The Big Chill in the 4K digital format, preserving the original look of the film stock without amping up the grain or washing it away. This is a nice, warm 1.85:1 widescreen transfer, maintaining a cinematic look while allowing for realistic colors, sharp detail, and an overall clarity that only brings depth to the proceedings rather than calling attention to the era.

The Big Chill has been released as a combo pack, with one Blu-ray and two standard DVDs, both boasting the same features, the bonus material ported over to the second DVD.

The Big Chill set a new standard for movie soundtracks, and it's the music where you will most notice this upgrade, whether listening to the uncompressed mono or to the 5.1 surround DTS-HD Master Audio option. Marvin Gaye and the Temptations both sound fantastic, and they will dominate your speakers just as much as they dominate Kasdan's narrative. Unlike his nostalgia, though, the history they inspire is potent and real.

By contrast, the dialogue sounds excellent and never disappears beneath the tunes. The folks in charge have done an exceptional job.

English subtitles for the deaf and hearing impaired are provided.

As expected, Criterion releases their double-disc set in a standard-sized case with an illustrated booklet that features both a vintage essay by critic Harlan Jacobson and a new piece by wünderkind Lena Dunahm (Girls). 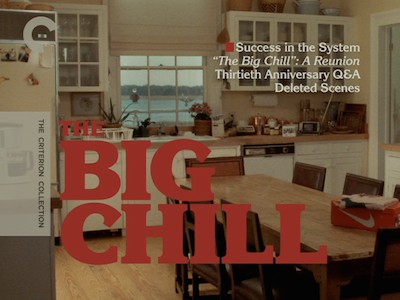 The on-disc extras also have a similar old-and-new theme: there is an older documentary (1998 vintage) about the making of the movie coupled with a new interview with Kasdan alongside a 2013 reunion of the director with Berenger, Close, Williams, Kline, Meg Tilly, and Mary Kay Place at the Toronto International Film Festival.

There are also deleted scenes (around 10 minutes, most of them at the funeral) and the original trailer.

Recommended. For as much as I equivocate and rag on The Big Chill, it's actually easy to see why it was successful and, even now, to appreciate Kasdan's often no-nonsense filmmaking. This is a well-crafted drama where the characters all serve a purpose, and though some of what they get up to is ludicrous and strangely of its time, that is kind of the reason it sticks around. This is a movie from a particular moment, one that it communicates effectively, and thus it behooves us to still watch The Big Chill even today. History, after all, repeats...and these Baby-Boom assholes were on their way to joining the 1% and/or moving into politics and selling us down the river. Know your enemy! 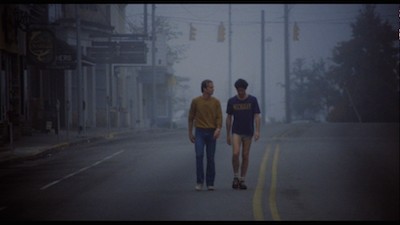