Cohen Film Collection // R // June 10, 2014
List Price: $34.98 [Buy now and save at Amazon]
Review by Stuart Galbraith IV | posted June 23, 2014 | E-mail the Author
Capital (Le Capital, 2012) is corporate thriller about the newly-crowned head of a leading French bank trying to hold onto his position amidst internal power struggles and a hostile takeover plot by an American hedge fund manager. Despite good intentions, it's an almost complete misfire from director Costa-Gavras (Z, Stage of Siege). The film, based on a novel by Stéphane Osmont (the pseudonym of a former Crédit lyonnais banker) seems to be quite realistic in the details, and in the interview with the director accompanying the Blu-ray disc, Costa-Gavras expresses the importance of this in making the film believable.

However, most of the movie-going audience, which would already have a difficult time understanding international banking machinations to begin with, will have an even more difficult time following the double-dealings and subterfuges of a thriller like this. Though I could keep pace with the story generally, many of the details were completely lost on this reviewer.

The bigger problem though is that Capital's message is hardly innovative or surprising: bankers are greedy, immoral bastards. Giving nothing away, in the last scene before a board of directors a character declares himself a modern-day Robin Hood, robbing from the poor and giving it to the rich, and everyone cheers. Well, yes, true enough, but we know that already.

The film offers a few interesting details about just how this is accomplished and some of the performances are good, but Capital really has nothing new to say on the subject while offering no solutions to these scurrilous practices. Probably mainly because star Gad Elmaleh (Midnight in Paris) is better known in France as a stand-up comedian, some reviews (and Cohen Media Group's publicity) regard Capital as "grimly funny" and the like. There are certainly moments of dark humor, but mostly the film is depressing without offering much insight. Its protagonist, for starters, is much less complex than he first appears to be. As another online reviewer inelegantly described him, by the end it's clear that he's just a "dickhead." 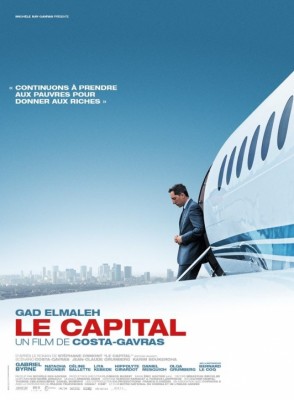 However older, more experienced board members are horrified by Marc's appointment. From the start the film is extraordinarily complex in terms of the financial wheeling and dealing, but suffice to say most of Marc's colleagues are primarily concerned with holding onto their positions and making sure he does nothing to put Phenix at risk. Elsewhere, American stockholder Dittmar Rigule (Gabriel Byrne) begins pressuring Marc to acquire a Japanese bank with mostly toxic holdings.

Marc, for his part, suspects his appointment is designed as a stopgap measure, and secretly plots to solidify his position, namely by hiring a private investigator to keep tabs on his colleague and competitors while recording all his phone and Skype conversations.

His strategy seems to entail presenting himself to Phenix's rank and file employees as a man of the people keenly interested in their personal input, including listening to complaints about their executive bosses, while at the same time paradoxically firing 10,000 or so employees in order to drive up the already profitable company's stock, for which in turn Marc is guaranteed million-Euro bonuses on every uptick.

Meanwhile, Marc's wife (Natacha Régnier, The Dreamlife of Angels) cannot understand her husband's insatiable hunger for money and power he no longer needs. Though he subtly suggests she could always walk out on him she does nothing. (One of many plot points leading nowhere.) He becomes attracted to two other women, Maude Baron (Céline Sallette), a specialist analyzing the Japanese financial market; and Nassim (Liya Kebede), a supermodel whom he recklessly pursues.

While Capital is moderately interesting in the way it realistically portrays cutthroat banking practices that are decimating the middle class and putting the financial stability of the global economy in peril, as a story it's one-note and obvious. When Marc's wife asks him, "Do you really need all that money?" his response is like something out of a bad Rod Serling script: "What else is there?"

The movie has its moments, such as one scene where Marc, regarding a highly profitable product offered by Phenix, asks another executive, "What exactly are we selling?" The other replies, "I thought you'd tell me!"

Mostly though, Capital tries hard but too often is ham-fisted and obvious. An early scene has Marc stopping off in his son's room to give him a credit card with a monthly allowance of 1,000 Euros. The teenaged boy, playing (of course) a violent video game, can't be bothered with even acknowledging the absurd gift. Like much of Capital, it's a scene without much apparent purpose and the boy is never seen nor heard from again.

A few other pointless additions: Marc addresses the audience, looking directly into the camera lens at the beginning and end of the film. Why? And what's the point of depicting Marc's violent fantasies, of his thrashing and/or humiliating various rivals? (For that matter, why does director John Landis turn up at the end as an extra?)

The IMDb lists Captial as having been filmed in Techniscope, the 35mm two-perf process. If that's true then the results here are excellent, up to contemporary standards. The image has a pleasing but not overwhelming film grain quality, a sharp image with excellent color. Audio, in French but interspersed with English throughout and with English subtitles, is offered in both DTS-HD and Dolby Digital 5.1 mixes, which sound fine.

Supplements consist of a 16-minute interview with Costa-Gavras in high-def, an entertaining standard-def interview with Gabriel Byrne running 10 minutes, and 20 minutes of behind-the-scenes footage with actor Gad Emaleh, the actor showing off a comical side never seen in the movie. A trailer, in high-def, is also included.

As usual for Cohen Media Group releases, this disc was loaded down with trailers for other Cohen titles, including Costa-Gavras's earlier Amen. (2002), all of which look more worthwhile than Capital, an earnest but dreary and depressing film offering few surprises. Rent It.