Guardian of the Highlands (Sir Billi)

Vivendi Entertainment // Unrated // April 8, 2014
List Price: $14.93 [Buy now and save at Amazon]
Review by Stuart Galbraith IV | posted April 21, 2014 | E-mail the Author
Guardian of the Highlands (2012) is significant because it may well mark the final film of actor Sean Connery. Connery, 83, had officially retired from acting after starring in The League of Extraordinary Gentlemen in 2003, but probably owing to his strong support of causes and projects emanating from his native Scotland, executive-produced and lent his voice to its first animated feature, originally released as Sir Billi. Publicly, Connery was pleased with the way the film turned out, but virtually no one else was. Critics were harsh when it debuted at the Sonoma International Film Festival and it went straight to home video in the U.S. (In Britain it opened on just three screens.) In response, Connery made clear his complete and utter retirement from the motion picture industry.

The movie was produced with the best intentions and had it turned out the way probably everyone involved with it would have liked, Guardian of the Highlands might have been a charming little film and a nice coda to Connery's screen career. Instead, the picture is notable for its singularly ugly computer-generated animation. Despite a 15 million-pound (about USD $25 million) budget, it looks painfully cheap and at times almost amateurish. It's hard to pinpoint why it looks so awful. Maybe the filmmakers' aims exceeded the budget they had to work with (Frozen, in contrast, cost $150 million). Maybe the hardware required couldn't compete with what Pixar and Disney have available, or maybe the artists just weren't up to the task. Nevertheless, even the ugly animation might have been overlooked had the film's story and characters been more charming and interesting, but instead they just add to the film's many problems. 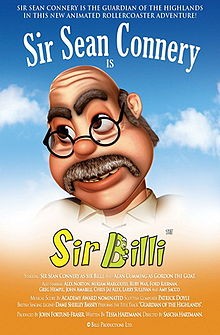 
The story is set in the Highlands and has an historical basis. Apparently beavers were hunted to extinction in Scotland 400 years ago but, according to the film, were illegally reintroduced by environmental activists. (Since the film was made there's been an effort to legally reintroduce the species, but no matter.) The plot concerns the efforts of a villainous policeman (with no clear motive) to catch the single beaver that escaped deportation, little Bessie Boo (Valentina Hartmann, the daughter, perhaps, of co-producer and director Sascha Hartmann and co-producer and writer Tessa Hartman, the former's wife? I've been unable to confirm this.)*. Bessie Boo and her rabbit stepsibling are swept away in a river following a strange rite-of-passage among the animal community, and Bessie Boo's adopted mother, also a rabbit, is seriously injured.

And that's pretty much the entire plot. Supposedly the film was expanded from a short film, which may account for the 79-minute feature's criminally thin plot. When the conflict is resolved, a new one is shoehorned late into the story, and that's followed by a lot of pointless dancing by various characters at a big party at the end, and unasked-for curtain calls by the show's cast during the extended end credits.

What's most striking (in the bad sense) about Guardian of the Highlands is the computer animation. It's unclear whether Sir Billi was deliberately meant to resemble Connery or not, but if so then it's a singularly unflattering caricature. All of the characters look singularly rudimentary, unfinished, and thoroughly unreal. Sir Billi's teeth resemble roof shingles. Flesh tones never resemble flesh tones, but rather some plastic-metallic matrix. Human fingers look like those one might find on an animatronic robot built by college students for a science fair. Even the more cartoony animals fail miserably. Their heads seem disproportionate to their bodies, and like those disturbing images of Santa Claus and the Easter Bunny widely disseminated on Facebook every holiday season, they're far more creepy than cuddly. Nor does it help that an inexperienced amateur too clearly voices Bessie Boo; her's sounds more like real trauma than a performance.

Worst of all is Gordon the Goat, a misbegotten character who is bizarre but in no way endearing. In trying to adapt a four-legged critter into a vaguely humanoid biped, the artists in charge have rendered him into something resembling (and moving like) the long-armed alien marionette briefly seen at the end of Close Encounters of the Third Kind, but with Baphomet's head. 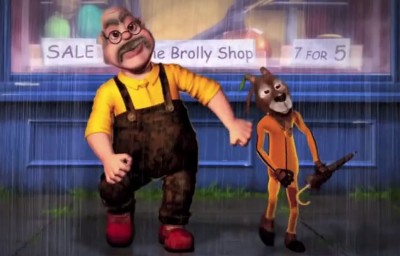 The picture is rife with in-jokes, most directed at Connery's signature role as James Bond. He drives a silver Aston Martin DB5, for instance, and his final, "Ah, the things I do for Scotland!" paraphrases a line from You Only Live Twice. Dame Shirley Bassey (so-billed) performs the title song over the vaguely Maurice Binderian titles. And there are other in-jokes here and there, including a reference to Connery's later-career hit The Hunt for Red October, and puns about Scottish names.

Reedier and more gravelly at once, it's unavoidably poignant to hear The Great Man's voice after such a long absence, though the film is a long way from being a worthy return. Largely unseen in the past decade and despite a dearth of important and/or successful films later in life, Sean Connery is still probably the biggest movie star in the English-speaking world (and much of the rest of it). When he was still appearing at Hollywood-type events Connery was the movie star other movie stars gazed at in awe. Contemporary Clint Eastwood may have been more successful and his career longer lasting, but Connery still impresses even the most jaded celebrities wherever he goes.

The movie is presented in 1.85:1 enhanced widescreen, preserving the original screen shape, and no matter how unattractive the movie itself is, the DVD appears to accurately represent the film's original look. The Dolby Digital 5.1 stereo is okay, and the region 1 disc is closed-captioned. No Extra Features.

Guardian of the Highlands may end up being Connery's ignominious end as a film actor, but I can't help thinking that, maybe, someone like Scottish filmmaker Bill Forsyth (whose wonderful That Sinking Feeling debuts on Blu-ray this month) will write a small-scale character piece worthy of Connery's talents, perhaps with him playing a wily, devilish old Scot reflecting on a long and charmed life. I can dream, can't I?


* Curiously though, Teresa Hartmann is apparently quite active in Better Together, an anti-Scottish independence group, and the Conservative and Unionist Party, while Connery is a member of the pro-independence Scottish National Party. Strange bedfellows.