Rita, Sue and Bob Too 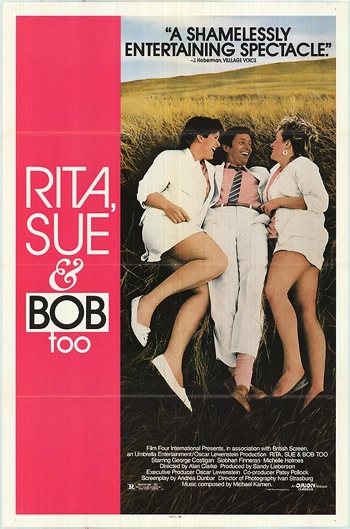 My first exposure to 1986's Rita, Sue and Bob Too was in a Hollywood Video rental store in the mid-'90s. It was stuck in the "Cult Movies" section, along with The Cabinet of Dr. Caligari, The Cars That Ate Paris, some Linnea Quigley movies, and whatever else the folks at Hollywood Video's corporate offices didn't know how to properly categorize. As a high school film buff, I would gravitate toward this section because it had the stuff that nobody else I knew had heard of: perfect fodder for someone who was both curious and snobby. When I saw the VHS cover of Rita, Sue and Bob Too (which is only a slight variation on the U.S. poster above), I was expecting some kind of middlebrow Euro sex comedy. I went home and checked the Leonard Maltin guide and the Roger Ebert guide: they both had good things to say about it. I decided to give it a shot. And hey, maybe there'd be nudity.

Alas, there is none. In the first ten minutes of the film, thirtysomething real estate agent Bob (George Costigan) does drive out onto a moor and take turns having sex with his two babysitters Sue (Michelle Holmes) and Rita (Siobhan Finneran) in the passenger seat of his car, but there is no nudity. Even so, the abruptness and matter-of-factness of this scene has caused it to stick with me from that hormonal moment of discovery to the present.

You see, Rita, Sue and Bob Too is a not a middlebrow Euro sex comedy, despite its title, its posters, and the plot of those opening ten minutes. Of course, I do feel a little bad for anyone who had to market this half-realistic/half-stylized angry dark comedy about sex and class in Thatcher's England, but it just seems a shame that no one publicizing the film -- especially not the designer of Twilight Time's new gentle, pastoral cover -- has figured out a way to capture what makes Rita, Sue and Bob Too so special. 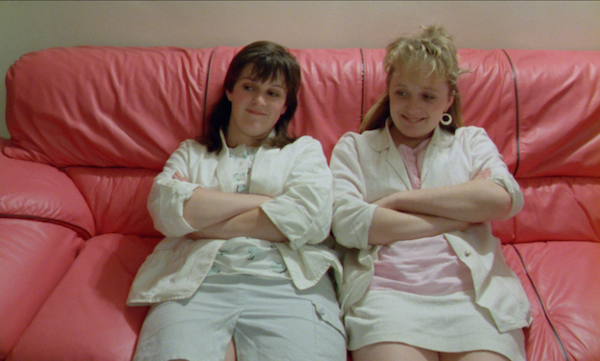 Adapted by the late Andrea Dunbar from two of her semi-autobiographical plays, this film doesn't revel in the After-School Special scandalousness of the lead characters' three-way affair. Bob is not a monster, and Rita and Sue are not exploited innocents. Their sex scenes are neither erotic nor horrific, but more often they feel pragmatic and humorous, with Rita and Sue frequently bickering while one of them is in flagrante delicto with Bob. And, as the title emphasizes, Rita, Sue and Bob Too is interested in the friendship between the two girls first and foremost. While they may not be what most filmgoers would think of as typical teenagers, Rita and Sue seem like accurately drawn portraits of girls from a certain class of British society. They both live on an impoverished council estate. Sue's dad is an incurable drunk. The miniscule yard outside Rita's home is littered with motorcycles that her brothers are in the middle of fixing. The film seems to suggest that these two look forward to shagging Bob again and again mostly because they are bored and have nothing else to aspire to. (Dunbar -- who was also the subject of the experimental documentary, The Arbor -- never left the public-housing estate where she was born, and essentially drank herself to death at age 29.)

Bob and his wife Michelle (Lesley Sharp) have it a little better, but their pre-fab home full of kitschy furnishings seems to suggest that they have just barely made it up to the lower rungs of the middle class. Michelle likes her comfortable life, but she doesn't seem to be all that fond of Bob. That's why Bob now and again feels compelled to have a fling with a babysitter or two. This isn't to suggest that Michelle is willing to take Bob's philandering lying down. In fact, the weirdly funny scene where Michelle confronts Sue about the affair in the middle of the council estate courtyard -- while the neighbors watch like it is television, and Rita's biker brothers show up to help -- is the other major scene from the film that has stuck with me since the '90s.

While the film's critique of class structure is pointed, the overall tone is best characterized as earthy cheekiness. One noteworthy scene shows the three leads dancing and making out in a club, while a novelty rock duo with quintessentially '80s fashion sense performs a sing-along song titled "Gang Bang."

Besides its earthy working-class sensibility, Dunbar's script also tends to subvert typical narrative expectations. When Sue starts going out with a shy Pakistani named Aslam (Kulvinder Ghir), it seems that the writer is setting up a more wholesome alternative to Sue's sexual escapades with Bob and Rita. Instead, the initially sweet Aslam turns out to be two-faced, possessive, and abusive. Suddenly, sharing a married man with your best mate doesn't seem so bad.

Director Alan Clarke, well-known for his working class dramas, is a perfect match for the material. He utilizes the long-take steadicam style that became his signature in films like Elephant. It adds a little bit of polish to the grainy 16mm visuals, and it allows us enough distance to laugh when the film is funny and not just be bummed out when the film is depressing.

There are no heroes in Rita, Sue and Bob Too, just normal folks living their lives and making more than a few questionable decisions. As the two girls, Michelle Hughes and Siobhan Finneran are note-perfect and hilarious. While their portrayals don't make Sue and Rita the kind of people you'd like to have as your friends, they make for good company over the course of ninety minutes. 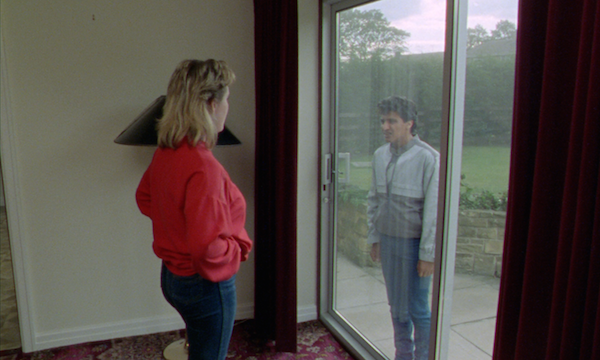 The Blu-ray
Rita, Sue and Bob Too comes to Blu-ray as part of Twilight Time's limited edition series. As usual, the run has been limited to 3000 copies, and each copy comes with a nice-looking booklet featuring an essay by Julie Kirgo.

The Video:
Originally broadcast on television in the UK, Rita, Sue and Bob Too was shot on 16mm film and the AVC-encoded 1080p 1.66:1 transfer makes that pretty plain. During the commentary track (see below), Nick Redman feels compelled to constantly apologize for the Blu-ray's sub-blockbuster look, but I think it's quite nice. Compared to another recent British 16mm-to-Blu-ray release, Black Jack, this transfer is a lot cleaner, with no instances of damage that I can remember. The image still sports a fair amount of film grain and certain shots are a little soft, but it suits the tone of the film perfectly and is not distracting in the least.

The Audio:
This release features an uncompressed DTS-HD MA mono audio track that is perfectly clean and clear. Nothing fancy, naturally, but the dialogue and music come through with excellent fidelity.

Final Thoughts:
Rita, Sue and Bob Too has aged tremendously well in the decade and a half since I first saw it. This time around, the funny performances, sharp script, and inventively choreographed camerawork are just as memorable as the taboo-trashing premise. Highly Recommended. 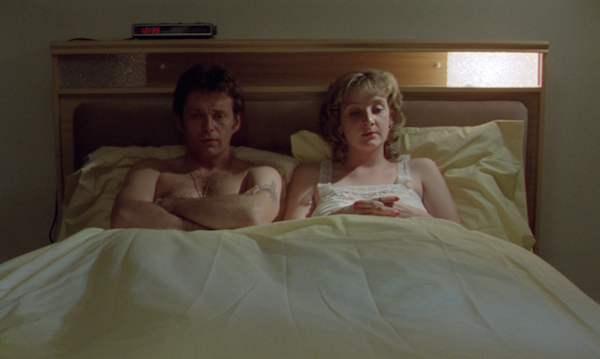