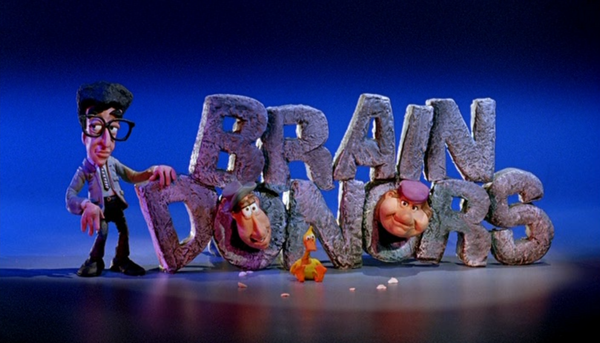 There are so many questions.

Why remake a Marx Brothers movie? And why remake A Night at the Opera, one of their very best? And why is Barton Fink playing Groucho? And who are those other two guys? I mean, who are they?

I'm sure that more than a few of these questions were going through the minds of the studio executives who found themselves in 1992 with the choice of properly releasing Brain Donors (originally titled Lame Ducks, which helps explain the animated duck in the opening credits) or dumping it in as few theaters as possible. Considering that you've likely never heard of Brain Donors, you can guess what they did. It's a shame too, because while it seems unlikely that Brain Donors would have been a runaway smash, it has more successful gags than most of the widely released spoof movies of the past few decades.

Then again, Brain Donors seems to be a movie that plays best if you approach it with modest expectations. I initially saw this movie on cable as a pre-teen, and when I revisited it a few years ago, I was pleasantly surprised by how much of the verbal humor and visual slapstick held up and was still funny. When I watched the film again for this review, with expectations of unheralded genius, I wound up feeling a little let down.

The screenwriter, Pat Proft, has frequently collaborated with executive producers David and Jerry Zucker on everything from the Naked Gun movies to the later entries in the Scary Movie series, and he is clearly a subscriber to the ethos of quantity over quality. The gags fly fast and furiously, but I was surprised this time around by how many solid laughs are matched by a near-equal amount of groaners. Director Dennis Dugan -- a TV journeyman and Adam Sandler's go-to director of late -- doesn't get in the way of Proft's script, but he doesn't really elevate it either. 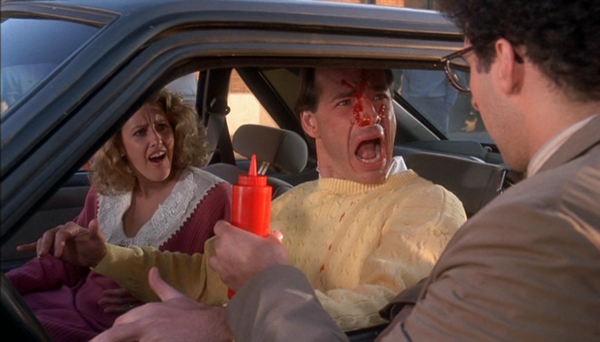 Yet the film has a secret weapon in lead John Turturro, who takes on what is essentially the Groucho role. As attorney Roland T. Flakfizer -- who is first seen literally chasing an ambulance on foot -- Turturro overplays like Jon Lovitz's Master Thespian, instead of mimicking Groucho's sly sauciness. This is good for the film, though, because Turturro's hamminess allows him to steamroll through Proft's George S. Kaufman-style, wordplay-laced dialogue without bothering to look back whenever Proft doesn't actually have a Kaufman-caliber punchline at the end of all those words.

Clownish stand-up Bob Nelson takes on the Harpo role, playing a wacky naïf named Jacques. Only, Jacques can speak, and he doesn't play the harp.

Brain Donors' Chico is the late English comedian Mel Smith, who might be best known in the U.S. as the Albino from The Princess Bride, although he was a very successful actor-director in the UK. He's a good fit for the role of streetwise cabbie Rocco Melonchek, but unfortunately, he seems to be the character in the main trio left with the least to do.

Nixing the opera backdrop and subbing in ballet, the movie otherwise keeps the plot of A Night at the Opera pretty much intact. Flakfizer takes over a ballet company owned by wealthy widow Lillian Oglethorpe (Nancy Marchand, doing a decent Margaret Dumont), while rival attorney Edmund Lazlo (John Savident) strives to seize the high-paid position for himself. Lazlo manages to corral the world's premiere ballet dancer, the self-important Roberto Volare (George de la Peña), for the company, but Volare and Flakfizer don't get along. Meanwhile, the company's top ballerina, Lisa (Juliana Donald), tries to get her talented dancer boyfriend Alan (Spike Alexander) a leading role in the company. (True to the spirit of the original film, the romantic leads are boring milquetoasts, and their story is highly forgettable.)

It all culminates in an uproarious sequence where the faux-Marxes ruin Volare's debut with the Oglethorpe company, so they can put Alan up in his place. It's such a breathlessly hilarious ending that it successfully wipes away the memory of some of the weaker bits earlier in the film. All is forgiven.

Why remake the Marx Brothers? Why not? 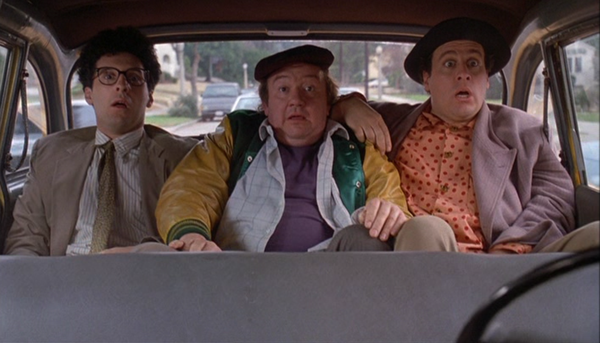 The DVD
This Warner Archive DVD-R re-release of Brain Donors exactly duplicates the 2004 release from Paramount. The same master, the same menus, the same lack of extras. Considering that the original OOP version is going for around $50 online, this seems like a more reasonable alternative.

The Video:
The 1.85:1 anamorphic widescreen image is what you would expect for a second-tier catalog title from the '90s. A little grainy and soft, but solid-looking overall, with good color reproduction.

The Audio:
The disc offers both a Dolby 5.1 surround option and a Dolby 2.0 stereo option. They both provide a crisp, clean audio experience. The atmosphere boost from the 5.1 option is negligible. English subtitles are also offered.

Final Thoughts:
If you were stuck on a desert island with a functioning DVD player, a popcorn popper, and only one version of A Night at the Opera... well, then, you're gonna want the original. If your circumstances are less dire, then you'll probably find something to enjoy in this bizarre but entertaining '90s remake. Recommended. 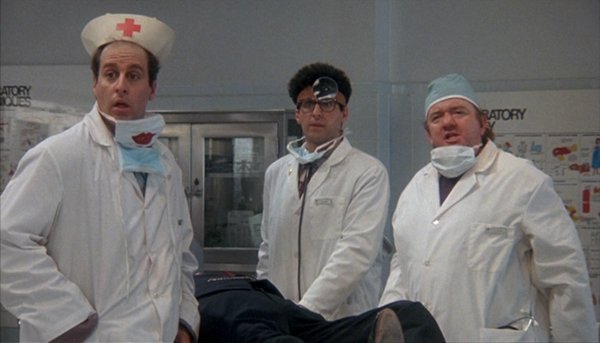