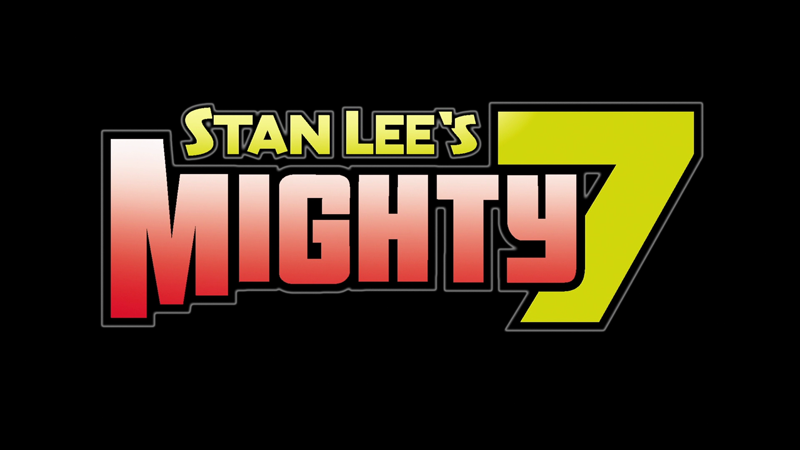 
The Movie
Stan Lee is one of my favorite people on the planet Earth. I had the great fortune to sit down with the comic-book legend a few years back, and it remains one of the most memorable interviews of my career, as there are few people who are as interesting to hear speak. Co-creator to many of the biggest comic characters in the world, he could easily be retired, enjoying his golden years, but he just keeps on working and, most famously, promoting his work.

The thing is, he hasn't had a true hit in a very long time. Though his Marvel inventions continue to fascinate, it would be hard to find a late-career Lee creation that's been a success, be it his animated characters like Condor, his NHL mascots or his early 2000s superhero collaboration with Ringo Starr. As enjoyable as Stan Lee is as a personality, his more recent creations just don't connect the same way his old ones did.

Thus, it was probably a good idea to put Stan the Man dead-center as one of the stars of his latest animated project, Stan Lee's Mighty 7. The story of a team of superpowered aliens who crash-landed on Earth, Might 7 stars Lee as himself, an opportunist who pitches the new aliens he run across in the desert as a reality comic book to his publisher. Lee is admittedly very funny, mixing a self-deprecating wit with all of Lee's substantial charm to create a character that's all him. 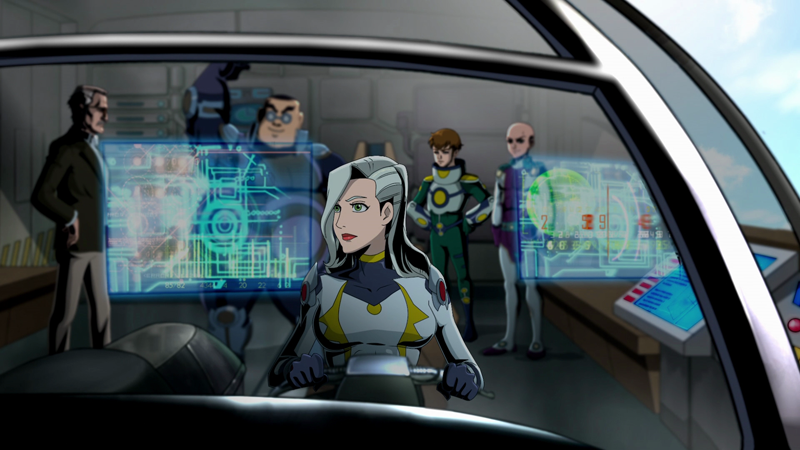 The problem is, he is not really the focus of the show, serving many as an enjoyable distraction from a super-powered team that feels more than a little warmed over. From lazy superhero names like Lady Lightning and Lazer Lord to cliched comic-style dialogue, everything feels like something you've seen before, just at higher levels of quality. Written by Tony Blake and Paul Jackson, previously of the genre-appropriate Sliders and Loid and Clark, it's loaded with so many ready-made super-hero quips that when one character makes a reference to cliches, it feels awfully meta.

Perhaps partially due to the stock characters, perhaps in part because of the formulaic writing, the story just fails to manufacture much of interest. The team, made up of two police officers and five arrested bad guys, gels far too quickly considering their origins, which are revealed in overly-emotional bursts throughout the film. The movie moves from action sequence to battle scene quickly, punctuated by more jokes from Lee and the other characters. There's a huge war going on in this movie (the first of a planned Mighty 7 trilogy) but when everything is going down, one struggles to care. Considering this film hit airwaves on the kid-friendly The Hub, perhaps this is just meant for a younger crowd who won't blink at this material. Perhaps for them, it's a classic case of "it's new to you."

The animation style, which is a hybrid American/anime look, is similar to that seen in shows like Afro Samurai, featuring heavy, angular line work, but the movement is awkward (any running is clunky at best) and there are a lot of questionable posing and action. For instance, when one character transforms into a lizard, his clothing very obviously rips off, only to be a part of his transformation back into human (of the answer is that he molts his clothing, I don't buy it.) The voice acting is far better, but still hampered by the script. There's an all-star cast at work, including Armie Hammer, Mayim Bialik, Christian Slater, Darren Criss, Sean Astin, Teri Hatcher, Michael Ironside and, oddly, Flea of the the Red Hot Chili Peppers. Most of them are quite good at handling cliched lines, particularly Hammer, who plays the big-guy quite well, and Criss, who might have a future in a role like Robin. 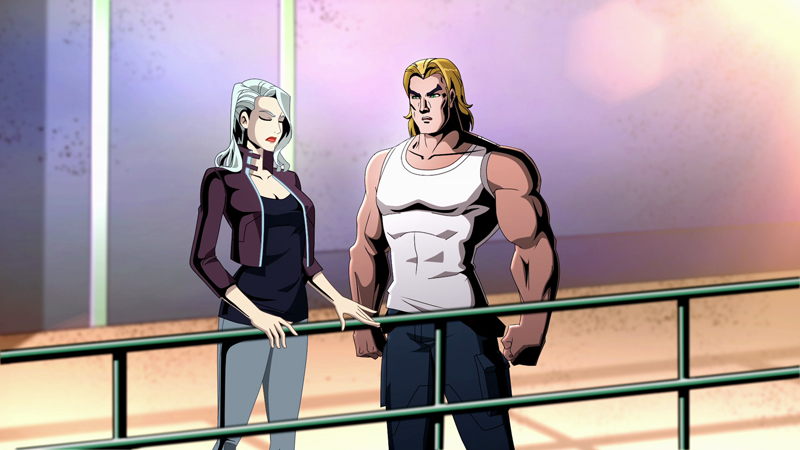 The Discs
Packed in a dual-hubbed Blu-ray keepcase with a holofoil slipcover, the two-disc release (one Blu-ray, one DVD) features an animated main menu with options to watch the film, adjust languages, select scenes and check out special features. There are no audio options, but subtitles are available in English SDH.

The Quality
The 1080P, AVC-encoded transfer here does a fine job of presenting the animation with a sharp image marked by vivid color and sufficiently deep black levels. There are no concerns with digital distractions and the lines are crisp, making for a better delivery than the film may deserve.

Presented via a DTS-HD Master Audio 5.1 track, the audio is strong, and offers up some nice examples of dynamic mixing, with the battle scenes featuring fine use of the surrounds to fill out the soundfield. It's not high-end, but it is better than most efforts in this area and it doesn't suffer from any disruption.

The Extras
The extras start with 4:25 of interviews questions with Lee, as he discusses what it's like to be a starring actor, the draw of animation, what his favorite character and scene are and what voice acting is like, showing his famous never-ending energy. There's more Stan in the 1:59 "Stan's Rants," in which he introduces all of the characters by complaining about them. Silly, but he sells the idea.

"Script to Screen" is an interesting little extras, using split screen to compare the script, sketch, voice-over and animation stages of a scene. There are three clips, totalling 4:12, and though there are no revelations, the peek behind the camera is appreciated.

Three extended scenes (running a combined 5:23) give you more action, but they are most interesting because they only feature the voices, with no other audio (and the voices are sometimes missing or oddly duplicated.) Without all the bang, crack, pow effects, these feel even emptier and pointless than before.

A Stan Lee trivia game is up next, though you can't really "play" it, just step through the questions to see the answers. These are no softball questions though. Most people will not know this Lee minutia.

A sketch gallery, made up of character designs and settings, shows off some of the impressive pre-production work that went into the film, but those clean designs were corrupted when they made the transition to animation.

Five of the composer's favorite music cues are included in a player with still frames from the show. Listening to them on their own lets you appreciate them a bit more. Also included it a 2:123 trailer.

The DVD version leaves all these behind, but features DVD-ROM extras, offering a selection of downloadable wallpapers and coloring pages, aiming for younger viewers. 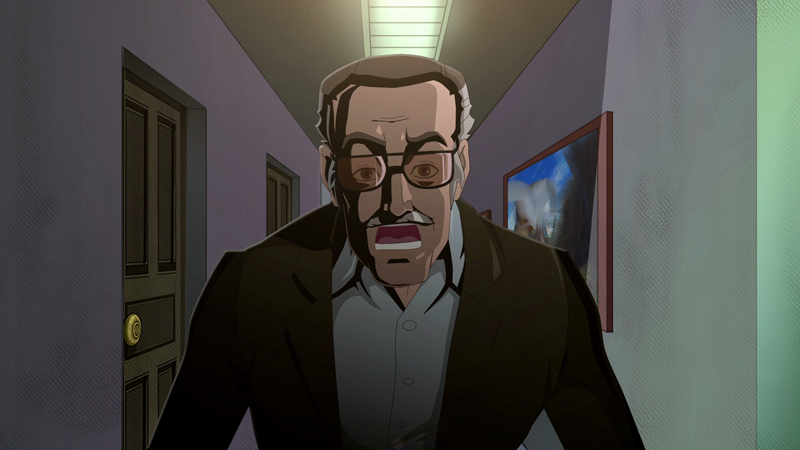 The Bottom Line
Stan Lee is great, and I wouldn't pass up on the chance to listen to him talk, but I haven't seen much from him on the superhero side (as in non-Superhumans series) that have captured my imagination. Mighty 7 is no different, as the show is pretty much same-old superhero action with some bonus Lee thrown in. The presentation is solid and there's a bunch more Lee in the interesting extras, but it's not enough to compensate for a sub-par comic adventure. There are plenty of better options out there if you want some superhero fun.