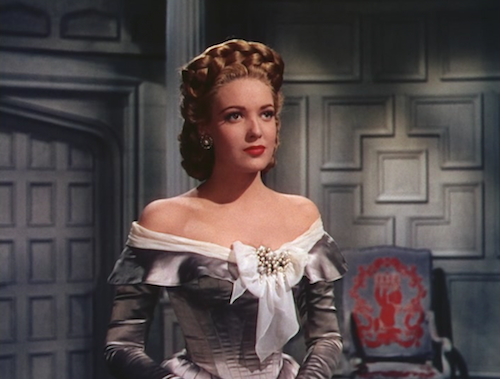 In terms of cultural impact, Kathleen Winsor's 1944 romance novel Forever Amber was the Fifty Shades of Grey of its day. Numerous states banned the nearly 1000-page book, but scandalized readers gobbled it up so heartily that it became the American best-seller of the decade. (I personally haven't cracked this particular tome, but reading the opinions of many internet commenters gives me the impression that while the novel's original readers were inflamed, for better or for ill, by the novel's sexual relationships out of wedlock, the story would not be considered nearly as racy by today's standards.)

As with all smutty best-sellers, Forever Amber was given a toned-down film adaptation that arrived on U.S. screens in 1947, after a slightly bumpy journey. Production originally began with Gun Crazy's Peggy Cummins cast as the title character and Leave Her to Heaven's John M. Stahl in the director's chair. After more than a month of filming, the studio didn't like what they were getting, so they scrapped the original production (at a loss of around one million 1940s dollars) and started again with A Letter To Three Wives' Linda Darnell as Amber and Otto Preminger directing. Once the film was completed, it caught the ire of the infamous Catholic censorship organization the Legion of Decency and was branded with their dreaded "C" rating (for Condemned). To get into more theaters, Fox made some cuts and added opening and closing voice-over damning the film's heroine for her sinful exploits. It worked somewhat, getting the film downgraded to a "B." (The version of Forever Amber that Fox Cinema Archives is releasing on DVD is missing those judgmental voice-overs, but it's hard to find any documentation one way or the other whether the film is otherwise presented uncut here.)

The film Forever Amber is a historical romance in the mold of Gone with the Wind (with a little bit of Jezebel mixed in too). Set in the years after the English Civil War, the film follows the journey of an orphaned girl who shuns the Puritans who took her in, drawn to the excitement of life in the royal court in London. Much like Scarlett O'Hara, Amber is ambitious and more than a little foolish, although Darnell's performance is far too poised to reveal any of the brattiness of Vivien Leigh's Scarlett.

When a band of Cavaliers stops in her small village, Amber becomes stuck on the leader, Lord Bruce Carlton (Cornel Wilde), and contrives to meet up with him in London. Though Bruce is resistant at first, his buddy Harry Almsbury (Richard Greene, in a role originally filled by Vincent Price in the abandoned version) convinces Bruce to let her stay. Bruce ends up falling for the girl, but is shortly sent off on a sea voyage of undetermined length. Though he leaves Amber more than enough money to live on, she is soon swindled out of all of it, landing her in prison for unpaid debts. There she meets Black Jack Mallard (John Russell), a highwayman who becomes the first of many dashing mustachioed men who enable her climb up the social ladder. After Black Jack breaks her out of jail, she runs into Captain Rex Morgan (Glenn Langan), who manages to get her work as an actress (a profession that, for some reason, has immunity against legal action). There, she catches the eye of the Earl of Radcliffe (Richard Haydn) and some dude named Charles II (a wonderfully sly George Sanders).

Throughout all of her escapades, Amber remains faithful in her heart to Bruce, who also fathered a son during their initial time together. Bruce stills love her as well, though he finds their union repeatedly thwarted by all these other men Amber takes up with. Amber, naturally, doesn't understand what the big deal is.

Though Forever Amber attempts the grandeur of Gone With The Wind (subbing in the Great Fire of London for the burning of Atlanta, for example), the film doesn't quite cross over the threshold from good soapy melodrama to great. Many scenes stand out, highlighted by sharp dialogue (credited to Philip Dunne and Ring Lardner, Jr.) and impeccable performances -- especially Sanders as the frequently bored but perpetually charming king -- but the film as a whole is left feeling a touch disjointed. While it's understandable why the film of Forever Amber has not stood the test of time as well as Gone with the Wind, it's actually not a bad little epic. 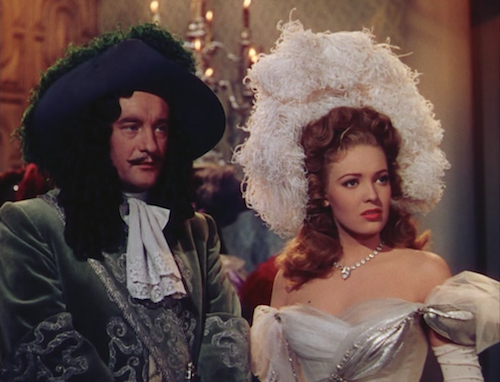 The DVD
Forever Amber is being released as part of Fox Cinema Archives' collection of manufactured-on-demand DVD-Rs. It contains no bonus features and no subtitles. The chapter breaks occur regardless of the story, at 10-minute intervals.

The Video:
The standard 1.37:1 transfer looks good... except when it doesn't. The Technicolor film elements utilized have almost no visible damage or dirt, and many sections are nicely saturated and perfectly balanced. Unfortunately, the whole movie is not so consistent. In the some shots, the skin tones get strangely pink. In others, the image is a little too green. The contrast is also a problem: certain night scenes are too dark (which might be an idiosyncrasy of Leon Shamroy's cinematography, but I doubt it) while many other scenes are hampered by a weak black level that gives the image a foggy glaze. On top of all that, this 138-minute film has been compressed more than it should, to fit on a DVD-R. The image has consistent artifacting throughout. It's not low-res Youtube quality, and it could even sneak under the radar on smaller screens, but it is quite apparent on larger monitors. In fact, since the print is so clean, I bet most casual viewers won't really pick up on most of these other video flaws. Purists, however, are sure to be disappointed.

The Audio:
The Dolby 2.0 mono audio is particularly nice, with only slight surface noise and a few occasional pops to distract from the cleanly reproduced dialogue and David Raksin's lush, Oscar-nominated score. 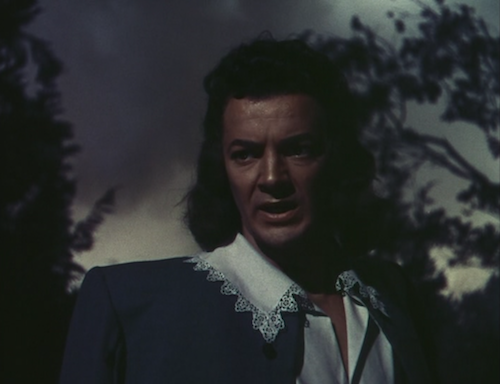