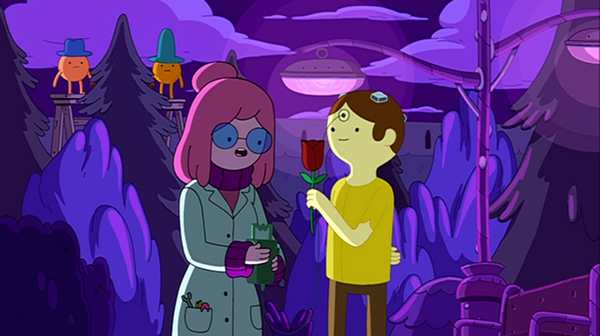 Here comes another grab-bag of 16 episodes from Cartoon Network's smash hit fantasy-comedy show for tweens (and up), Adventure Time. The Suitor is an excellent compilation, consisting mostly of new-to-DVD material from the show's fourth and fifth seasons, although the final quarter of the disc goes back to season 2 and 3, which fans might already have in their collection at this point.

Presumably this disc, like the five randomized compilations released before it, is targeted at younger fans who just need an entertainment fix and who don't worry about scrambled up episode orders or a lack of meaningful bonus features (the kind of things that make adult fans of kids' shows VERY upset indeed). Sure, the kids might be getting the modern-day equivalent of those U.S.-only Beatles albums, but who says Yesterday and Today has no merit? This haphazardness would be less of an issue, I'm sure, if the episode selection had some sort of thematic rhyme or reason -- like Cartoon Network has at least attempted with their concurrently running program Regular Show. Even without a clear-cut throughline, The Suitor (named, like its predecessors, after the first episode featured in the set) shows the growth the show has made over the years in terms of characterization and thematic depth.

For the uninitiated, it's hard to exactly describe the sensibility of Adventure Time, which is a hipster-friendly amalgam of classic mythology, alternative comedy, unabashed surrealism, and the '80s films of Amblin Entertainment. The setting is the fantastical land of Ooo -- which, in a particularly dark bit of backstory, might actually just be the planet Earth several hundred years after an apocalyptic war. There are a number of different kingdoms, one of the best being the Candy Kingdom, populated by sentient sweets and ruled over by the perpetually teenaged Princess Bubblegum (Hynden Walch). Elsewhere can be found other rulers, like the villainous but dopey Ice King (Tom Kenny), Marceline the Vampire Queen (Olivia Olson), and the self-involved Lumpy Space Princess (show creator Pendleton Ward). The heroes of the show are the constantly adventuring 13-year-old Finn the Human (Jeremy Shada) and his shape-shifting buddy Jake the Dog (John DiMaggio).

This collection highlights many episodes driven by supporting characters, particularly Princess Bubblegum and Marceline. The two of them are seen teaming up to battle a witch who stole a precious item from Marceline in "Sky Witch." Princess Bubblegum and her distinctly science-based mindset are at the center of a few stories here, including the title episode, where she agrees to date a boy severely smitten with her just so she can study the effects of infatuation upon him. Marceline, meanwhile, is featured here in storylines where she must chose between her need to be an evil vampire and the desire to be buds with Finn and Jake; oddly these stories, "Red Starved," "Heat Signature," and "Henchman," appear in reverse chronological order throughout the disc, giving the false impression that Marceline gets less and less friendly with Finn and Jake over time.

BMO (Niki Yang), an adorable sentient pocket-sized computer with arms and legs, also pops up in a number of charming stories, including "Shh!," where Finn and Jake decide to see who can stay silent the longest (which convinces BMO that they are mute impostors), and "Be More," where Finn and Jake take BMO back to the factory to get fixed and end up meeting their friend's Wizard of Oz-like inventor.

In the more recent episodes featured on the Suitor disc, the writers of Adventure Time have found a way to make their fanciful stories resonate on an emotional level, even in the midst of ridiculous premises, sometimes by returning unsentimentally to themes of friendship and love amidst all the hijinks and sometimes by allowing the stories to go to unusually dark but relatable places. If there is anything disappointing about this set, it might be that when we get to the older episodes that have been tacked on at the end of the disc, those stories feel a little more random and a little less grounded. Still, for a mixed-bag cash-in release, The Suitor is quite strong and extremely entertaining. 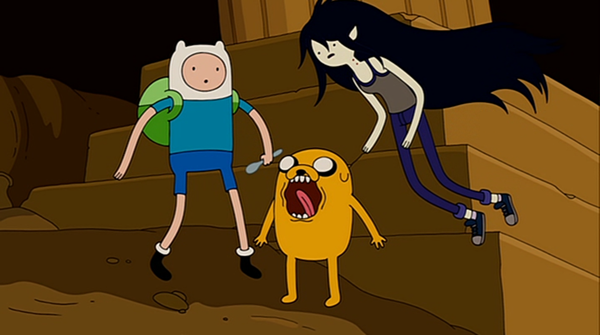 The Video:
While it's obviously a step down from the HD version of the show, this widescreen 1.77:1 presentation is excellent. Occasionally, the lines read as jagged instead of smooth and certain shots appear soft, especially on a larger monitor, but the colors are vivid, the blacks are rich, and there is no detectable artifacting. I like it!

The Audio:
Nothing flashy, but the Dolby 2.0 stereo audio handles the dialogue, effects, and music with no problem. For readers, the disc offers English SDH.

Special Features:
Just another one of those Little Did You Know character galleries, with little factoids about some of the supporting characters. 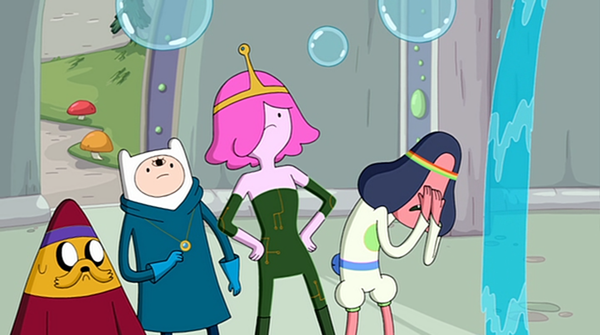