Other // Unrated // May 20, 2014
List Price: $29.99 [Buy now and save at Amazon]
Review by Tyler Foster | posted June 20, 2014 | E-mail the Author
Note: Although screencaps can only tell so much of the story, click any capture (taken straight from the disc) in this review to expand the image to full size. Also, if you're curious as to why DVDTalk is reviewing this title a second time, skip to the "The Blu-Ray" section of this review for an explanation. Update (03/11/2015): In addition to the versions covered here, Mill Creek will release a bargain version on 3/17 which features an adjusted transfer and English subtitles, but none of the extra features. 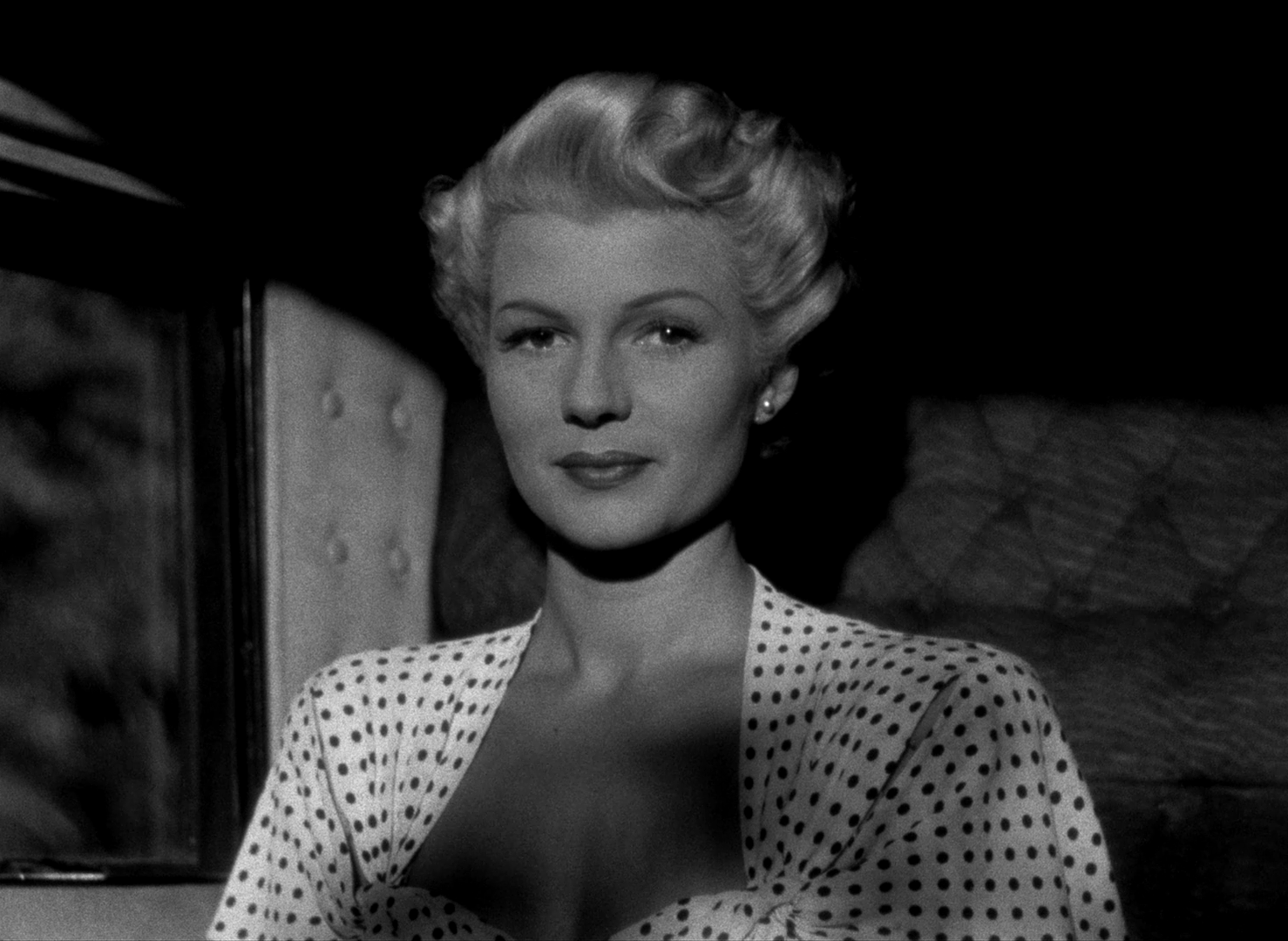 It's probably debatable, but if there's any single injustice committed throughout film history that one could simply wish away, the lack of preservation of trims and edits (not to mention films in general) in the years before home video would probably rank near the top. Although there have always been directors who would hate the idea of viewers seeing their cuts (Stanley Kubrick, Woody Allen), the number of films permanently butchered that could be restored is enormous. In that regard, it'd be hard to imagine any director benefitting as much as Orson Welles, whose Magnificent Ambersons, Touch of Evil, and Mr. Arkadin all suffered their share of editing woes (many at the hands of studios, but many also due to Welles' own inclination to become distracted with other projects). Another film that was never finished to Welles' satisfaction is his 1947 film noir The Lady From Shanghai, thanks to creative differences between Welles and Columbia studio head Harry Cohn.

Welles plays Michael O'Hara, a seaman who meets a gorgeous woman, Elsa Bannister (Rita Hayworth) in a park, then later saves her from an attempted mugging. He's smitten from the start, but instead of a date, she reveals she's married and offers him a job on her husband's yacht. Sensing a compromising affair looming on the horizon, he resists, but the next day, her husband, notorious criminal lawyer Arthur Bannister (Everett Sloane) tracks Michael down and half-calculatingly manipulates him into joining the crew after all. While on the cruise, Michael meets Arthur's partner George Grisby (Glenn Anders), a leering imp of a man who always seems to have his eyebrow raised in a knowing grin. Not only does he catch onto the sexual sparks between Michael and Rita almost immediately, but he also presents Michael with a too-good-to-be-true proposition: "kill" George so that he can retire with a hefty insurance payout, and receive $5,000 for the effort.

Despite Welles' reservations with the picture, there's plenty to like about The Lady From Shanghai. A sinister, uncomfortable atmosphere hangs over the entire film, most of which is generated by Michael's own uncertainty. The motivations of George, Arthur, and Elsa are all mysterious, which inspires unrest in the viewer because they all clearly have some sort of agenda for Michael. Before Michael is aware that Elsa is married to Arthur, he cites him as an example of America's corrupt justice system (Arthur has just gotten a man off for murdering his wife, using the defense that he thought she was a burglar). 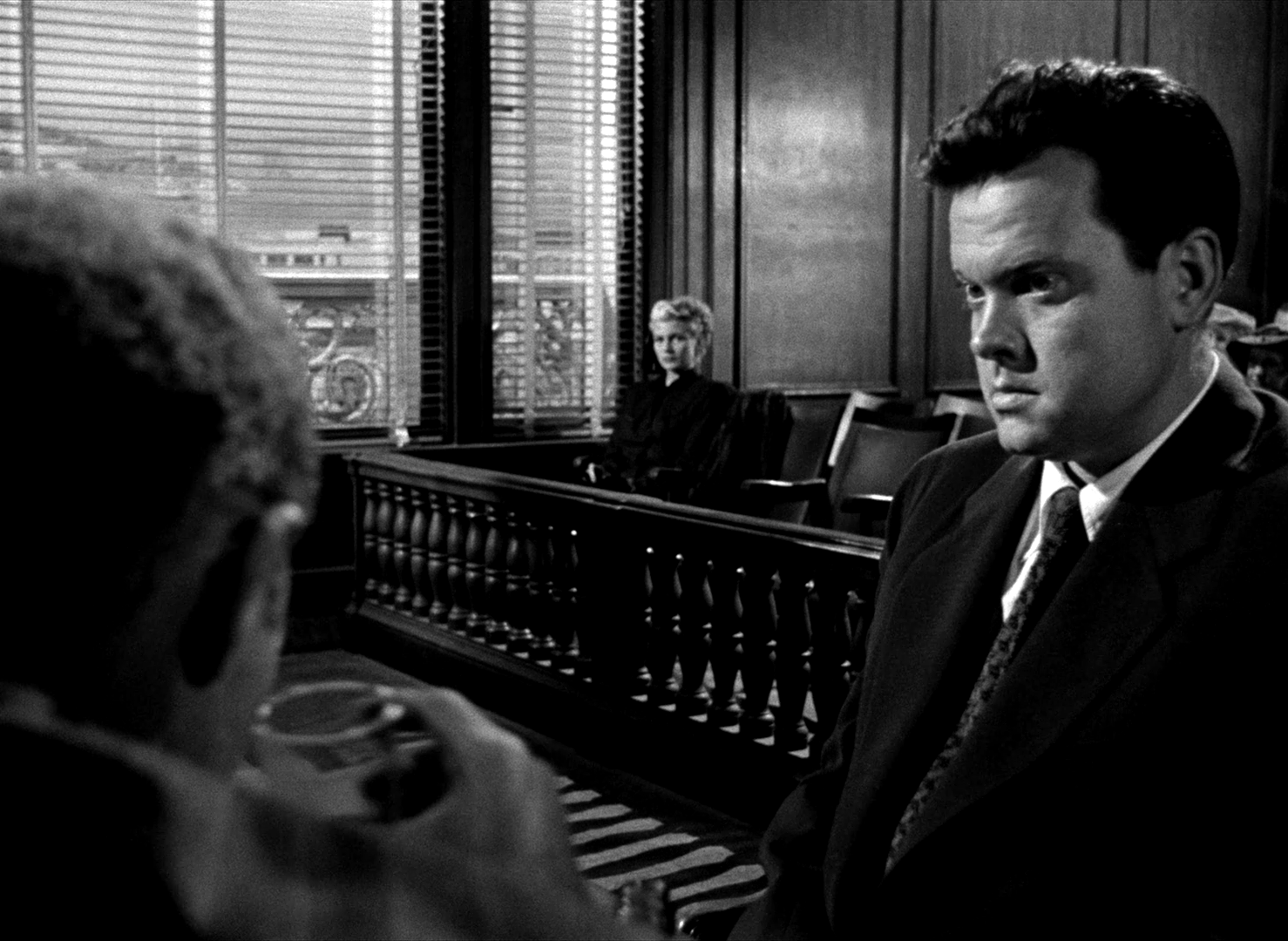 Not only does Arthur pick up on Michael's basic contempt for him, but he also plays coy about how much George has or hasn't said about he and Elsa. Meanwhile, there's almost no question there's a catch to George's scheme, but Michael sees a future in the $5,000 payout, and is willing to take the risk. Sloane's casual cruelty is one of the picture's highlights, with his hawk-like face and hint of a grin always hovering between Michael and freedom, and Anders' wicked giggle adds a disturbing humor. Comparatively, Hayworth and Welles could be called less interesting (at least, less outwardly colorful), but there's a potent sadness to Hayworth's performance, and Welles is perfect in one of the film's most important and arresting scenes, describing a memory of sharks in the water. Michael is admittedly a bit of a bland character, with a crucial line about following one's nature losing a bit of meaning when Michael's nature is minimally defined, but every other scene provides a touch of flair or wit from Welles to keep the performance engaging. Much has been made over the years of Welles' Irish accent, but (as no expert on accents), it's arguably just strange to hear the accent coming from Welles more than it is the quality of the accent itself.

As the film progresses and the situation becomes increasingly complicated (numerous people end up dead, and Michael finds himself in a raucous criminal court being defended by Arthur, who he suspects is intentionally losing the case for revenge), Welles' directorial style tilts toward the nightmarish, spiking the already oppressive air of conspiracy with surrealism. Michael flees into Chinatown, hiding himself in a theatre while the chaos of a Chinese play occurs, before going for broke in a literal funhouse, with Michael sliding down a chute into a hall of mirrors. The film's climax is rightfully iconic, a perfect visual metaphor for fractured loyalties and two-faced perpetrators. It's a brutal finale for brutal people.

On an artistic level, The Lady From Shanghai is frequently stunning; on an entertainment level, it is a little less compelling, the area in which Welles' changes might've had a huge impact. According to Peter Bogdanovich on the disc's excellent commentary, although the initial version of the picture ran nearly 3 hours and the finished movie is only an hour and 27 minutes, he was less dissatisfied with the editing as he was the music, which he felt was intrusive and simplistic. There is certainly a sense that the score isn't doing much for the picture, and a subtler, more thoughtful composition would've made a big difference, as well as some of the trims that Bogdanovich says Welles wanted to make. Most disappointingly, Welles apparently cut an even more haunting and nightmarish version of the funhouse that lasted much longer; in Welles' mind, it was more of a centerpiece than the mirrors, so much so that he hand-painted the set and spent an entire evening cutting the scene himself. There's also the fact that the story is frequently confusing, with a series of twists and turns at the end that would make a carousel operator's head spin. It's a sad story that Welles fans will find all-too-familiar...but what remains is still a hypnotic and engaging puzzle of ruthlessness and deception. 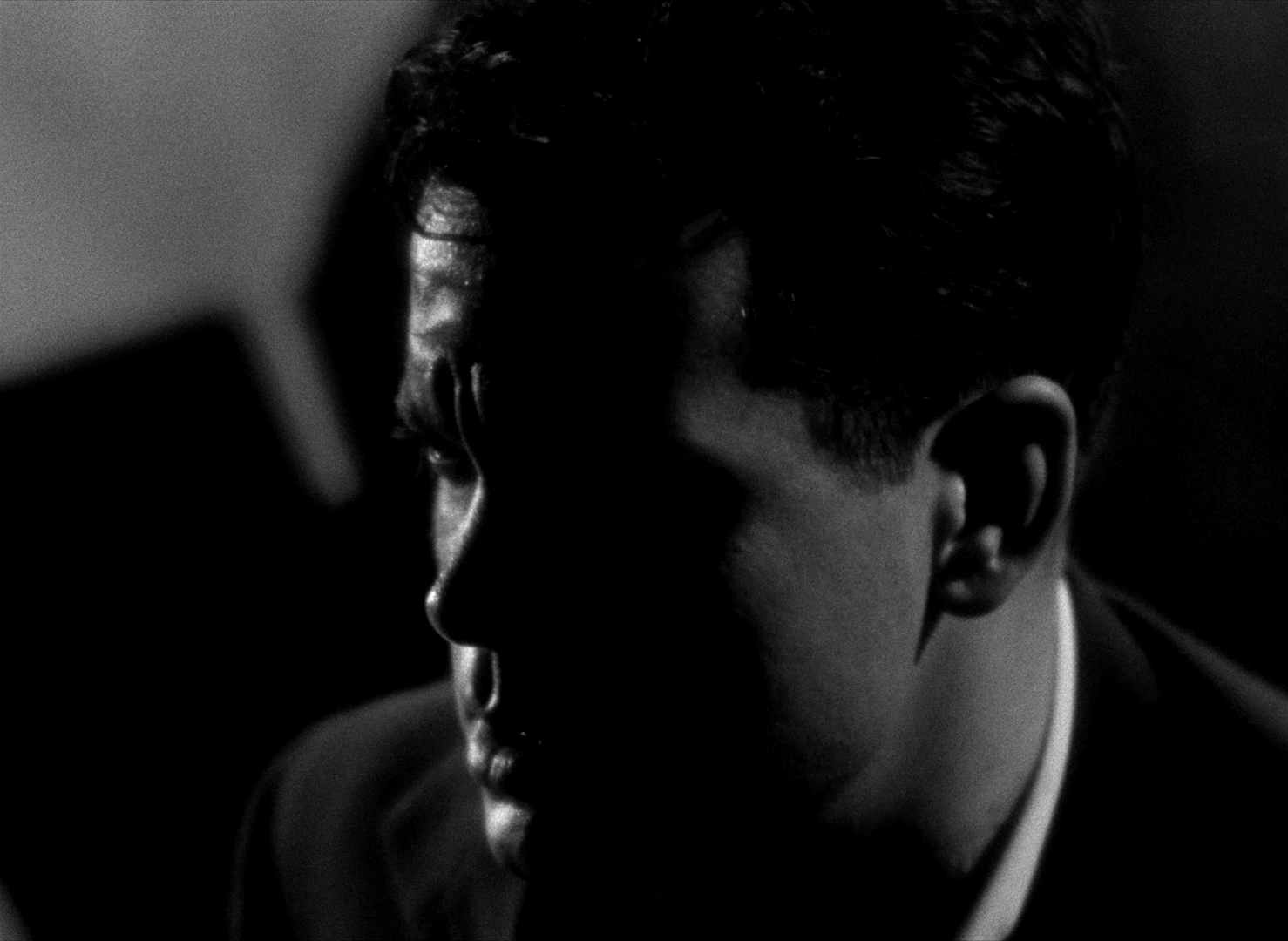 The Blu-Ray
I'm sure many readers remember that just a few months ago, DVDTalk's own DVD Savant reviewed TCM Vault's The Lady From Shanghai on Blu-Ray. Although Savant was satisfied with what he saw, other more technically oriented Blu-Ray fans expressed online disappointment at the single-layer disc and its' standard-def audio, lack of subtitles, omission of an Eddie Muller extra mentioned on the website, and DVD-sized packaging. In most cases, that would be it, yet a couple of weeks ago, customers who ordered the title from MoviesUnlimited reported receiving a significantly different package. For reasons unknown, TCM silently corrected many of the complaints made about their initial pressing and silently re-released the movie. This new edition of The Lady From Shanghai comes in a two-disc Scanavo Blu-Ray case (the kind Criterion uses), with a slipcover featuring slightly alternative artwork. The disc has been given a dual-layer upgrade, and the sound on the program is now DTS-HD Master Audio 2.0 instead of Dolby Digital. The Eddie Muller extra is now included as well (see below). If you purchased the previous edition, call the TCM Shop at (888) 982-6746 with your order number and they will send you a prepaid label to send back the old Blu-Ray for the new one. It's a surprisingly receptive response to consumer complaints, although aside from the continuing lack of subtitles, there is one major caveat...

The Video and Audio
Information available online suggests the initial version was encoded using the older VC-1 codec. This new edition of The Lady From Shanghai is presented in 1.33:1 1080p AVC, and for the most part it looks very good. Fine detail is often impressive, aside from a soft shot or two, and although an examination of screencaps or paused frames reveal a significant number of small artifacts, I can guarantee you that these artifacts are essentially invisible in motion. Grain has not been wiped away with any post-processing, and I did not spot any banding or other artifacts beyond the aforementioned ones visible when the film is stopped.

That said, this new transfer of The Lady From Shanghai differs drastically from the January version in terms of contrast. The image presented here is noticeably dark, with thick, impenetrable shadows covering the screen. Of course, stark shadows are a visual staple of film noir, but the distinct lack of visible detail or nuance in these shadows does arouse a level of suspicion about whether the film is now too dark. During the daytime scenes, the film looks perfectly natural, and it's more than possible that the previous version of Shanghai was too bright. However, this development will undoubtedly disturb some viewers. (The included DVD copy is the initial, brighter version.) I have provided a number of screencaps that should give the viewer an idea of what to expect with regard to the black levels of this disc, and some additional screenshots can be seen here, here, and here. 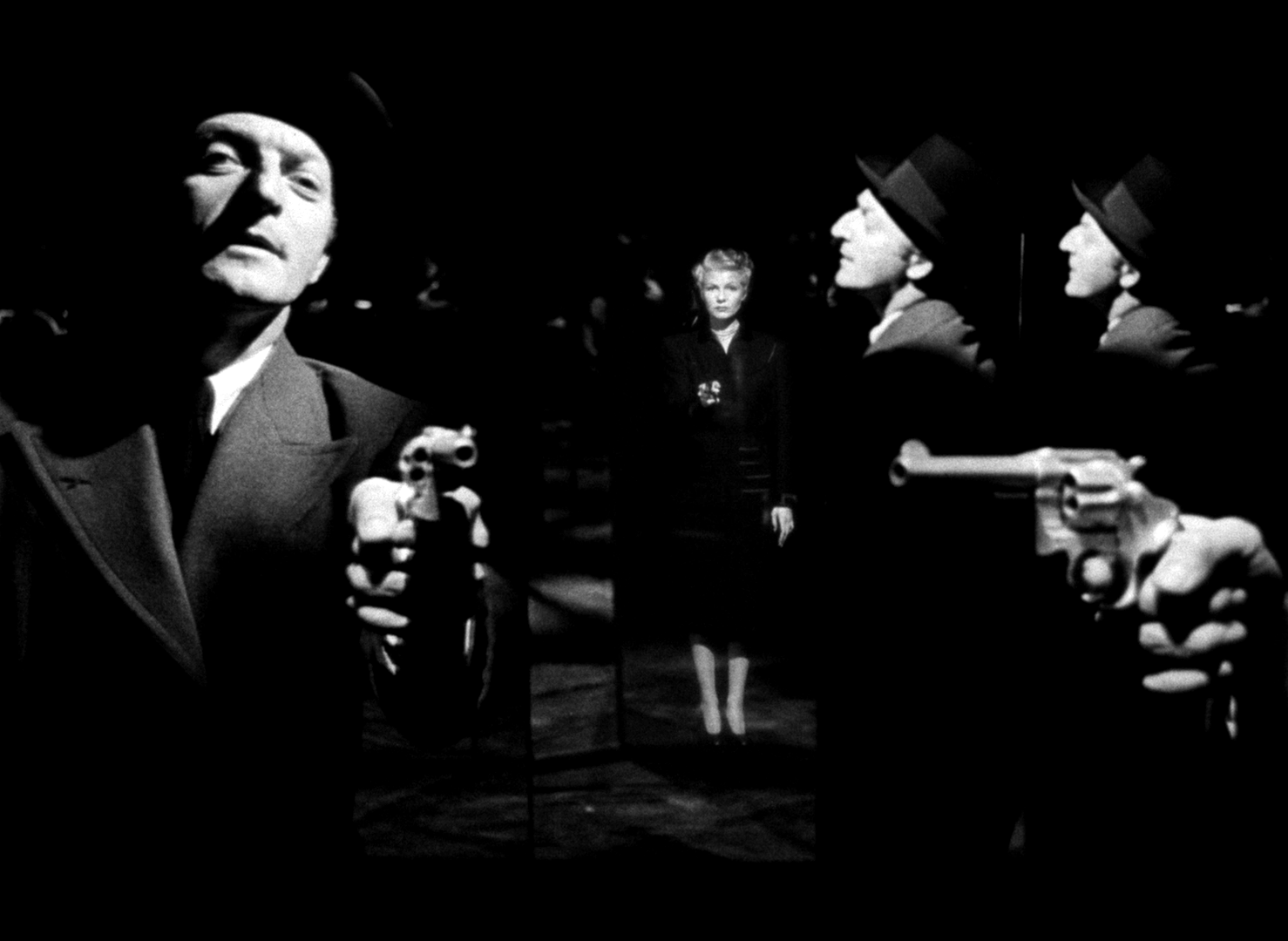 The film's new DTS-HD Master Audio 2.0 track sounds excellent, with very strong separation of dialogue and music. The film's climactic "house of mirrors" scene is startling and immersive, as far as a 2.0 track can manage. Sadly, as mentioned above, the one thing TCM did not correct is the lack of English subtitles for the feature, which is made all the more curious given Sony's DVD release of the film had a subtitle track that seems like it could've been ported.

The Extras
The same lineup of extras that appeared on the previous Blu-Ray are all retained, including an introduction by Robert Osborne (2:38), an excellent audio commentary by filmmaker Peter Bogdanovich reading excerpts from interviews with Welles conducted over the years, as well as offering some additional comments as the film comes to an end, a noircast.net podcast (30:01), a TCMDb article, a Orson Welles biography, and five galleries.

The one additional extra, mentioned on the TCM website but missing from the initial disc, is the three-part "Comments by Eddie Muller" (2:34, 12:59, 4:52, HD). Muller, the "Czar of Noir", talks about his thoughts on how to watch the film, and covers in more detail the actual nuts-and-bolts (well, maybe) history of the making of The Lady From Shanghai that Bogdanovich touches on in passing during his audio commentary (Bogdanovich is more anecdotal, whereas Muller is more general), as well as his praise for Welles' visual style. There's not really any reason for the extra to be chopped up into three pieces (especially with no "Play All" option), but it's a nice addition.

Conclusion
Those who are not as fascinated by film history may not love The Lady From Shanghai, which is more of an interesting link in Welles' career than it is a mystery. That said, it is a stunningly directed movie, and anyone willing to give themselves over to the visuals and tone that Welles is offering up (amid studio interference) will find more to enjoy. This new release from TCM is mostly an improvement over the version of the disc they released in January, although the heightened black levels are potentially worthy of concern. All things considered, this release -- as much as TCM should've gotten it right the first time, and still could've potentially done better with a more balanced transfer and English subtitles -- is highly recommended.