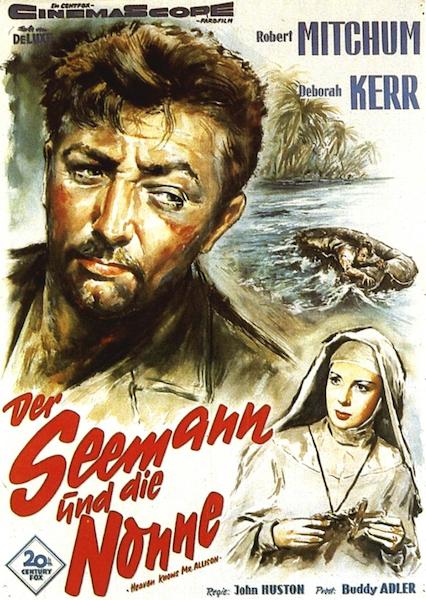 In the early going, the World War II-set Heaven Knows, Mr. Allison plays like an off-kilter remake of director John Huston's own The African Queen from just six years prior. Again, a rough man and a religious woman are thrown together by circumstance in the middle of a war. Robert Mitchum exudes grit and reg'lar-guy earthiness as the titular Marine corporal, who gets separated from his men when their submarine is attacked by the Japanese. However, he manages to float away on a raft to a secluded island. There, he finds a solitary soul, Sister Angela (Deborah Kerr, back in her Black Narcissus habit), who came to the island a few days before, accompanying a priest intent on collecting one of his fellow clergy, so they could all escape to Fiji. Unfortunately, the priest they were seeking was not there anymore, their escorts got spooked and left the island without them, and the priest who made the trip wound up dying.

With a few day's work, Allison's raft can be transformed into a steerable sailing vessel, so it looks like we're right on schedule for an African Queen-style sailing adventure to Fiji. Huston even indulges in a broadly comic sequence during this part of the film, where Mitchum's character manages to snare a sea turtle for dinner, but then gets dragged through the water by the powerful creature.

Things change quickly, though, when Japanese planes bomb the island -- destroying the raft -- and then soldiers decide to set up an outpost. Mr. Allison and Sister Angela are forced to live in a cave to avoid being spotted. The close quarters inevitably lead the pair to become closer. When Sister Angela finds she can't eat the raw fish that Mr. Allison risked his neck to bring back, Allison is so devoted to her that he doesn't complain or argue. Instead, he immediately risks his neck further by sneaking into the Japanese soldiers' pantry to steal their canned goods. This leads to an extremely entertaining section where Allison is thwarted from leaving with his stolen goods for several hours and has to remain out of sight. It's not an unbearably tense nailbiter of a sequence, but one that piles on its frustrations and complications in a way that makes one sympathetically wish that that nun had just enjoyed the fish.

Eventually, Allison admits that he is in love with Sister Angela and would marry her if she wasn't a nun. Sister Angela's revelation that she has yet to take her final vow -- so she's not really a nun yet -- initially seems like a screenwriting trap door that would allow this restrained romance to eventually be non- (or only semi-)blasphemously consummated. But Huston and co-screenwriter John Lee Mahin (working from Charles Shaw's novel) give their characters -- especially Sister Angela -- a little more credit and don't try to resolve their stories so patly. Mitchum pulls off a tricky balancing act by making Allison a forthcoming, unintellectual guy who nonetheless possesses a quiet intelligence and a buried sensitivity that he never fully unleashes, even when he is clearly hurt by Sister Angela's refusal to abandon her calling. Kerr meanwhile manages to transcend her natural poise and seeming stiffness to really the communicate the joy she feels being with Mr. Allison and the internal torment that these feelings cause when he asks her to give it all up and become his wife.

Intimate as it is, Heaven Knows, Mr. Allison is a war picture, and it ends with a triumphant sequence where Mr. Allison performs a heroic deed as bombshells burst all around him. It doesn't come out of nowhere -- in fact, we've been waiting for some kind of U.S.-Japan showdown for most of the film -- but it can't help but be a little less satisfying than the interactions between Mitchum and Kerr that make up the bulk of the film. Heaven Knows, Mr. Allison is quite good overall, but I would be willing to take a stab in the dark that this minor stumble of an ending is what has kept it from attaining all-time classic status.

The Blu-ray
As with most of Twilight Time's releases, Heaven Knows, Mr. Allison is available in a limited edition of 3000 copies, complete with a booklet featuring an essay on the film by Julie Kirgo.

The Video:
The AVC-encoded 1080p 2.35:1 transfer is solid, with a high bit-rate and no particularly noticeable digital flaws. However, this is a far cry from the top-notch picture featured on the Blu-ray for Huston's The African Queen. The film elements used here seem inconsistent, with a lot of shots looking oddly soft. The colors also fluctuate between looking vaguely washed-out and more appropriately saturated. The transfer is pretty clean, with most of the significant dirt and damage scrubbed away -- even so, it fortunately doesn't have a plastic, over-worked look. As the film goes on, the footage generally seems to look better, and even the weaker, softer stuff up top still has enough detail that you would never mistake this release for standard-def.

The Audio:
The DTS-HD MA mono audio sounds good with no noticeable damage. The explosions have decent heft, and Georges Auric's score translates clearly and fully when it pops up. The dialogue is mostly quite good, although I caught a few moments of mild distortion, particularly when the actors spoke sibilant sounds. In the subtitles department, the disc offers English SDH.

- Perfect for use in your redubbed version of Heaven Knows, Mr, Allison in Dothraki.

Final Thoughts:
Heaven Knows, Mr. Allison is a goody, with great performances by its two leads. The script falters a little on its way toward resolution, but that's not enough to prevent the film from getting Recommended.