Competent remake of a remake. Sony Pictures' Choice Collection of hard-to-find library and cult titles has released The Devil's Playground, the 1937 submarine actioner from Columbia Pictures, starring Richard Dix, Dolores del Rio, Chester Morris, George McKay, John Gaullaudet, Pierre Watkin, and Ward Bond. A close reworking of Frank Capra's 1928 silent, Submarine, which had been previously remade in 1931 by Roy William Neill as Fifty Fathoms Deep, The Devil's Playground is limited by the Production Code--is Dolores a whore or not?--and by tight-fisted Columbia's somewhat stingy budget. However, the three leads are well-cast, and director Erle C. Kenton keeps everything moving along swimmingly. No extras for this nice fullscreen black and white transfer. 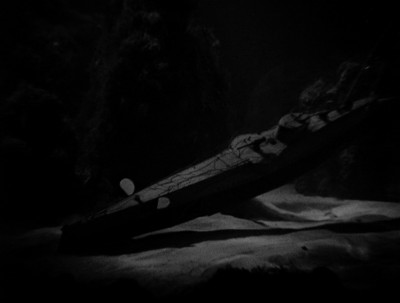 Trapped below in the crushing depths of the sea, your air hose cut, a deep sea diver wants a blood brother like Robert Mason (Chester Morris) around. When the Navy's best diver, Jack Dorgan (Richard Dix), finds himself in just such a fatal situation, his pal Robert dives in, air hose at the ready, and plugs Jack in, ignoring the danger he himself now faces from the bends. Cocky, handsome Robert is also the kind of lady killer who can hook a friend up with some pretty gals in Manila, just with his gift of gab and smiling face. So when the buddies, who have served together for eight years, receive new orders--Jack gets Dego shore duty, running the Navy's diving school, while Robert is assigned to a sub--they part with a slap on the back and a stoic, "So long, pal." For rootless Jack, this means he can buy a home; within a few months, though, Jack tires of the quiet, lonely suburban life he's made for himself. At a dance hall, he's corralled by slinky minx taxi dancer Carmen (Dolores del Rio), who can spot a naive, gullible sucker with plenty of dough a mile off a gentleman who will treat her with respect. Carmen knows all the right (and well-rehearsed) things to say to rope dopey Jack in, and before you can say, "I'm too much of a square to have enough game to nail you without a license," Jack marries Carmen...who immediately starts looking bored. She cheers up considerably when, back at the dance hall (Jack has been called away on a mission), she meets who else but Robert, who's on leave and looking for you know what. The more worldly Robert knows exactly what Carmen is (but we kinda don't...), and he treats her accordingly, but Jack flips out when he "introduces" the two and then catches Carmen slapping Robert (she saw Jack coming, and quickly cried rape). Buddies no more, Robert will soon regret hitting the sheets with Carmen, when his sub goes down and the only diver who can save him and the rest of the crew, is an uncaring Jack. 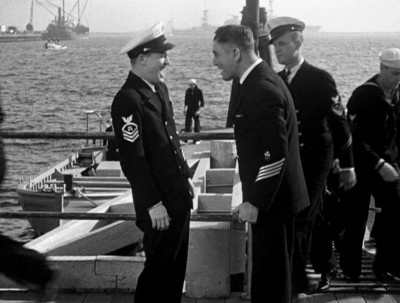 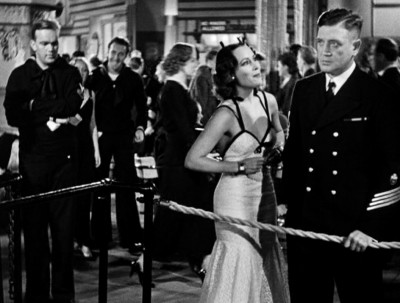 I haven't seen Capra's Submarine (and according to one source I found, Fifty Fathoms Deep is considered a lost movie?), so I can't really compare The Devil's Playground to it--something I try not to do, anyway, between remakes and originals. From Submarine's synopsis, though, it seems The Devil's Playground's story sticks pretty close to Capra's (Fifty Fathoms Deep eliminated the Navy angle, and had the girl die at the bottom of the sea). So, taken on its own, The Devil's Playground's scenario, written by Liam O'Flaherty, Jerome Chodorov, and a just starting out Dalton Trumbo, from Norman Springer's original story, isn't terribly original--the classic "buddy betrayed love triangle" melded to an equally familiar service actioner--but it's handled by director Erle C. Kenton in a reasonably efficient manner (Kenton turned out hits like Abbott & Costello's Who Done It?, It Ain't Hay, and Pardon My Sarong, as well as House of Dracula, The Ghost of Frankenstein, and the classic, Island of Lost Souls). The first two thirds of the movie are devoted to establishing Dix's and Morris' friendship, Dix setting up his first home in San Diego, and the two men's relationship with treacherous del Rio. Dix, stolid as ever, is complimented nicely by bright, hard Morris (who comes off like Gable's feisty New York cousin), with both leads establishing an easy rapport in the movie's early scenes. Surprisingly, The Devil's Playground's best sequence comes when Dix impulsively buys a cute little house out in the 'burbs, purchasing expensive modern furniture for it, and even getting a telephone installed (still a luxury for many of Dix's Depression-era fans in the theaters)...only to roam around the rooms after several months, lonely (his neighbors snub him) and bored out of his mind (Dix is rather touching, calling the operator for the time, just to hear someone's voice). It's a brief but interesting take on suburban ennui (he finally has what he always wanted, and what most in his audience would kill for, and yet it does nothing for him), but its largely abandoned when del Rio comes on the scene. 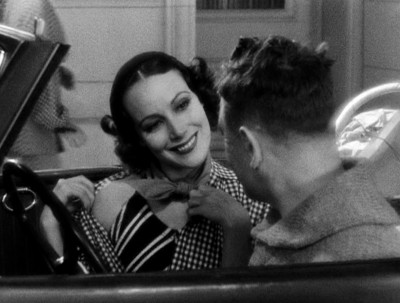 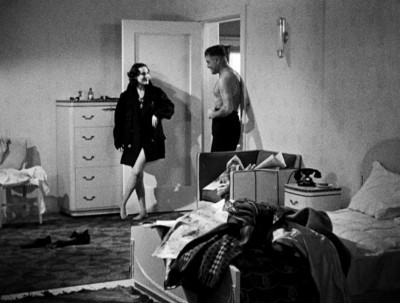 Here, director Kenton gets quite a few sly laughs out of del Rio's contemptuous double-takes and eye-rollings at well-meaning but dim Dix, who bores her to tears. del Rio, by this point in her career already sliding out of top tier status (just as Dix and Morris were doing, too), is alternately amusing and sexy as hell, switching instantly back and forth from the sweet, sad (and phony) little dance hall girl with the sob story, to the hard chippie who can't believe she's stuck with a mug like Dix (when she's driving Dix crazy, breathing, "I think maybe I'm a little scared of you...because you're so strong," you crack up...before realizing you'd have bought that line from her, too). Kenton contrasts Morris' relationship with del Rio perfectly, with his hip-to-her-act, couldn't care less attitude garnering her devotion--just the opposite of her disdainful rejection of solicitous, nice guy Dix (I laughed out loud when Dix makes her a hot dog that she takes one bite of...before curling her lip and tossing it into the sand). The only problem with all of this quickly becomes apparent: what, exactly, is del Rio's character? Is she a straight-up chiseler, looking to fleece Dix and lam it? Is she settling in for long-term cuckolding and free meals? Is she a prostitute, as the character is in Fifty Fathoms Deep? Why did she agree to marry Dix? Was it monetary...because she never makes any moves in that direction.... 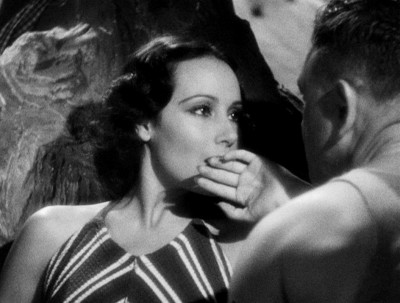 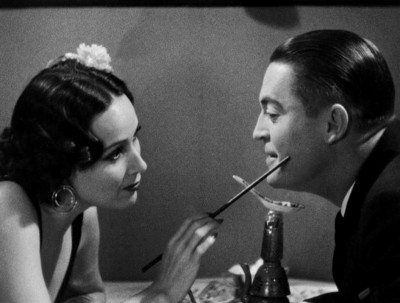 Critically, just when we're actually getting caught up in this threesome, wondering how it's going to resolve itself, The Devil's Playground turns into a submarine picture, and we never find out what's going on with del Rio. This last reel of action is capably handled; the tank work and model-making isn't bad considering the time line (sometimes we see the tank's wall a foot or two behind the swimming actors, other times some nice subterranean lighting, while the models...look like models), and the suspense aboard the doomed sub, with men running out of air and options, nicely tense (even though Columbia saved a few bucks with the big "rescue bell" finale, opting for a newspaper headline montage, rather than mounting an approximation of the real thing). It's not Ice Station Zebra in Cinerama...but it's okay for its time. Unfortunately, The Devil's Playground weighs anchor quickly after this, giving us zero resolution on what happened to Dix's and del Rio's marriage. SPOILER ALERT! A supremely unconcerned del Rio is pictured back at the dance hall, getting ready to...to, um...what? What is she getting ready to do with that new sucker? Marry him? Grift him? Have him take her out for chop suey? We just don't know. Is she still married to Dix? Divorced? Did she get the cute little suburban bungalow in the settlement? All we know for sure is Morris got Dix, as they laughingly ride off together in a rickshaw in Hong Kong, where they're now stationed, together again. For all we know...maybe the movie's "true" couple did prevail.... 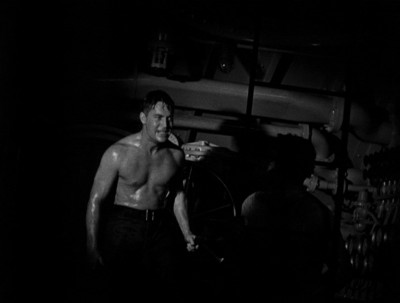 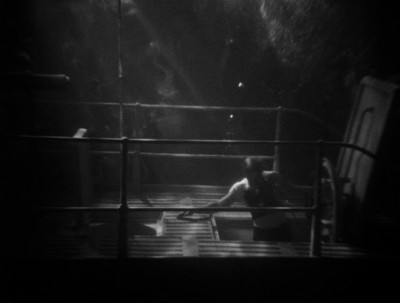 The Video:
The fullscreen, 1.37:1 black and white transfer for The Devil's Playground looks quite good, with solid blacks, moderate grain, good contrast (mostly), and minimal screen imperfections like scratches and dirt.

The Audio:
The Dolby Digital English mono audio track is okay, with moderate hiss. No subtitles or closed-captions available.

The Extras:
No extras for The Devil's Playground.

Final Thoughts:
Not bad submarine opus...and even better on dry land. Any time you have submariners sweating it out at the bottom of the ocean, you're going to score in the suspense department. The Devil's Playground, however, teases us with a familiar but well-played romantic triangle that's just as interesting as that sunken tin can, but which unfortunately fades before there's any resolution. Well-cast performances help quite a bit, as does director Erle C. Kenton's sure hand. I'm recommending The Devil's Playground.