Private Life of Sherlock Holmes, The

Kino // PG // July 22, 2014
List Price: $29.95 [Buy now and save at Amazon]
Review by Stuart Galbraith IV | posted July 31, 2014 | E-mail the Author
Conceived as a three-hour roadshow but shorn of an hour by its disenchanted director prior to its release, Billy Wilder's The Private Life of Sherlock Holmes (1970) in its 125-minute form was met with mixed reviews and tepid box-office. Today, however, even in its severely compromised form it's regarded as one of Wilder's best films, some say the best of his late-career offerings. (I say Avanti!, 1972, is even better.) Written by Wilder and frequent collaborator I.A.L. Diamond, the film is a witty, ingeniously clever, superbly acted, nostalgic yet daring comedy, with wistful romance and even a touch of Gothic horror tossed into the mix.

I myself have seen it at least a dozen times through the years and know it so well that after watching the first reel of Kino Lorber's new Blu-ray, licensed from MGM (as part of the former's "Studio Classics" line), I was sorely tempted to write this review without actually watching the rest of the picture. Wilder's and Diamond's script hooked me into staying with it until the end, however.

Simply put, while the Blu-ray improves slightly on MGM's earlier DVD version, the transfer is a long way away from doing the film justice. It didn't help that the day before I viewed Universal's superb Blu-ray of Burt Kennedy's The War Wagon (1967), likewise filmed in Panavision and color. That Blu-ray is practically perfect; The Private Life of Sherlock Holmes is a dirty, smeary mess, resembling as it does an old theatrical print of something originally shot in the inferior Techniscope process. The image is soft, the colors are faded, there's dirt, scratches, and even reel change cues throughout, while the mono audio is flat and lifeless. To add insult to injury, for some reason literally five minutes before the end the image suddenly springs to life. Though imperfect, it exemplifies the minimum standards of what The Private Life of Sherlock Holmes should look like on Blu-ray. A couple of new supplements likewise exemplify this same uncaring, slapdash attitude. 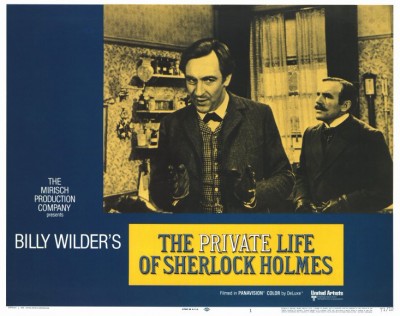 Clearly Holmes aficionados, Wilder's and Diamond's screenplay smartly integrates material from Sir Arthur Conan Doyle's canon into their original screenplay. Like the literary Holmes, these stories are presented as accounts of Holmes's cases told by longtime friend Dr. Watson. The movie opens in present-day London where, 50 years after Watson's death, heretofore suppressed accounts of Holmes's life and cases deemed too controversial in their day are at last made available.

The film in its present form has a bored Sherlock Holmes (Robert Stephens) again lamenting a dearth of challenging cases, citing as one example a request by a circus owner to find six missing midgets. ("The circus owner offers me five pounds for my services. That's not even a pound a midget!"). A celebrated Russian ballerina (celebrated Russian ballerina Tamara Toumanova, also in Hitchcock's Torn Curtain) seeks an audience with the great detective, mysteriously inviting him to her dressing room where her Russian manager (Clive Revill, very funny) reveals the 49-year-old dancer's proposition: that she and Holmes spend a few weeks in Venice so that she can conceive a child with both beauty and high intelligence. Holmes begs off, excusing himself by claiming a preexisting love relationship with Watson (Colin Blakely). This wounds Watson's manly (and Victorian) pride, causing him to briefly question his friend's sexual orientation. Watson: "I hope I'm not being presumptuous, but ... there have been women in your life, haven't there?" Holmes: "The answer is Yes ... You're being presumptuous."

Later, a Belgian woman, Gabrielle Valladon (Geneviève Page), is fished out of the Thames after an apparent murder attempt. She's looking for her missing engineer husband, who had been working on an advanced air-circulating pump. Baffling clues, including wandering Trappists monks, color-changing wedding rings, dead parakeets, and even the elusive Loch Ness Monster lead the trio to Scotland. But Sherlock Holmes's even smarter if pompous brother, Mycroft (Christopher Lee, uncharacteristically minus his usual hairpiece), warns Sherlock that further investigation into the matter can only end in disaster. Time proves him to be correct.

Before Wilder's film, Sherlock Homes had been a steady fixture in films, radio, and on television, mostly famously the movie (and radio) series starring Basil Rathbone and Nigel Bruce (1939-1946), but rarely did they or others address Holmes's relationship with women nor his addiction to cocaine, as this does head-on. The film's main plot resembles one of the most famous Arthur Conan Doyle short stories, "A Scandal in Bohemia" (1891), the first Holmes story to be published in Strand Magazine and illustrated by Sidney Paget.

Wilder's Holmes falls squarely between Rathbone and the iconic Sherlock of later decades, Jeremy Brett. Robert Stephens plays him as a misogynist, completely distrustful of all women owing to past experience (some of which, sadly was removed from Wilder's longer cut), with an obvious distaste for Britain's ruling class, as symbolized by his brother's machinations within the Diogenes Club. He is amused by and nonjudgmental of the prima ballerina's unusual offer and delights in the strangeness of Madame Valladon's predicament (while clearly never entirely trusting her, either). My colleague DVD Savant describes this Holmes perfectly: "Wilder's ... is a disillusioned romantic, an intellect who retreats defensively to a position of asexuality."

Fleshy-faced Stephens had starred with then-wife Maggie Smith in The Pride of Miss Jean Brodie the year before, but otherwise was not particularly established in films and an inspired casting choice by Wilder, who first proposed Peter O'Toole. Stephens, however, couldn't adapt to Wilder's exacting direction and suffered a nervous breakdown in the middle of production. (He looks pasty-faced and unwell for much the film, though the whiteness of his features seems a deliberate makeup choice.) It was his only major starring feature, though he would appear in the interesting, obscure The Asphyx in 1973.

Equally exquisite is Colin Blakely's Dr. Watson, here not so much dense (like Nigel Bruce's interpretation) as excitable and stubbornly Victorian. Blakely's dialogue and manner are very much like watching a British Jack Lemmon at work, while physical bits of comedy (watch his hidden stethoscope nearly fall out of his hat while working incognito) Blakely handles like a master Vaudevillian. It's a shame he and Wilder never worked together again. (Clive Revill, however, topped his performance here in Wilder's Avanti!)

Indeed, the movie is so chock-full of quotable dialogue, funny satirical moments, brief flashes of warmth and tenderness, an outstanding score by Miklós Rózsa, evocative main titles, etc., it's easy to miss that the film revolves around a stupendous failure on Holmes's part.

Described in better detail above, The Private Life of Sherlock Holmes looks quite mediocre on Blu-ray, a huge disappointment for such an important title. Except for the last five minutes, the transfer is a mess: faded color, endless fluttering, dirt, visible scratches, reel change cues. While admittedly cinematographer Christopher Challis utilized a wide range of image-softening filters for most of the film, the picture nonetheless is downright horrible at times. Take a gander at the 41-minute mark for one particularly ugly-looking sequence. It looks like a widely circulated 35mm theatrical print. And while originally released monophonic, the flat, lifeless audio (2.0 DTS-HD Master Audio) doesn't do the presentation any favors, either.

Most of the extras are carried over from MGM's earlier DVD version. These include about 50 minutes worth of semi-reconstructed scenes cut from the release version. Tragically, those with audio have no picture while those with picture have no audio. (Those missing components have precluded an all-out restoration.) Interviews with Christopher Lee and editor Ernest Walter are interesting but could have used some judicious editing themselves. A trailer does a bad job selling the film to American audiences, and the one new addition, a "deleted epilogue scene," suggests the folks at Kino couldn't be bothered with watching the movie first. Audio only, it unimaginatively is supported by a single publicity photo of Stephens and Blakely rather than use stills from the final scenes of the picture. Even more bizarrely, its first five minutes consist of a scene near the end that already exists in the short version of the film. Why couldn't they have included video from that, then segued into the previously unreleased audio?

This is the best home video version of The Private Life of Sherlock Holmes to date and for the foreseeable future, which is not the same as saying it's anywhere near as good as it should be. Indeed, the presentation is fairly disastrous, but Billy Wilder's near-masterpiece is also simply too good not to experience. The movie rates a DVD Talk Collector Series rating, the transfer a Skip It. Average it out, and you get a mild Recommendation.