Long before CBS would have firmly entrenched Everybody Loves Raymond into Monday nights, starring a comic who was the center of an ensemble with an attractive wife and eccentric family and/or neighbors, Bob Newhart was getting it done for the Tiffany Network, setting the template that Ray Romano would follow years later. First with The Bob Newhart Show and later with Newhart , his trademark dry delivery, playing against faces who themselves became just as familiar as Bob's, were touchstones of Monday comedy for those of you who may not have been into football that week. And in its fourth season that ran from 1985-86, Newhart was in cruise control.

The premise of the show was easy to follow; author and television personality Dick Loudon (Newhart) decided to retreat from the busy New York pace of life with his wife Joanna (Mary Frann), and they opened a bed and breakfast called the Stratford Inn. Dick decided to run this while continuing to work on the occasional book and host a Sunday morning talk show with local interview subjects. His collaborator at the station was Michael (Peter Scolari, Bosom Buddies), but along with Joanna, he had Stephanie (Julia Duffy, Intolerable Cruelty), an heiress who inexplicably was waiting tables and housekeeping at the Inn, but he also had a handyman named George (Tom Poston, Princess Diaries 2) who was affable, occasionally capable and often times slow of wit. There were also three local townspeople who frequented and helped in and around the Inn and city, Larry (William Sanderson, Blade Runner) and his two brothers, both of whom did not speak, and both of whom were named Daryl (played by Tony Papenfuss and John Voldstad). The show followed the exploits of the ensemble, almost exclusively using the classic situation comedy story format folks had grow to know and love at that point. 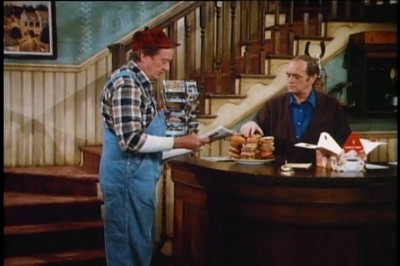 For me it has been a while since I have been exposed to the dry repartee and comic timing that is Bob Newhart so it was daunting at first looking at the material in the show. But as the season goes along, you notice that Bob is perhaps less dry in his delivery and more of a slightly calm, almost zen center of a quirky little nook in a sleepy community. Weird stuff goes on around Dick and he does have his moments of silliness, but he is more than willing to let his supporting cast have their own moments in the sun.

There are a couple of moments where you say to yourself "Really?" like specifically "The Stratford Horror Picture Show" which strains a bit of credulity and if you walk in on that without context, may say to yourself, "Well this is a kind of lame Halloween episode." Or in the opener Pirate Pete" when Dick takes over for a children's talk show host and the awkwardness of his new position is palpable. But Newhart rolls with all of the punches admirably, Frann is a capable blonde Pleshette foil (and for my money an underrated actress of the time, RIP Mary). Scolari came into the show with his own chops honed and his work on his own and in scenes with Duffy is charming. And Poston is, well, Poston. 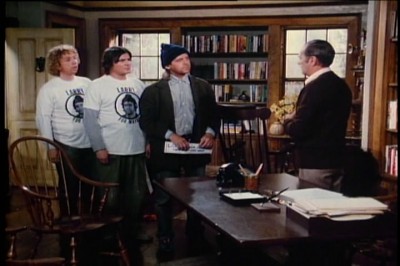 Overall, it was fun to see Newhart again after so long. As someone who remembered hearing it on television more than one occasion, I would try to hear what was the subject of so much laughter for my Dad (man, does that sentence read like damn near anything straight out of the upper middle-class). And sure, there is a moment or two when it can be laugh out loud funny, but it was Newhart's subtle skill at deference to let others get their scenery to chew on which was the thing I appreciated as I watched Season Four.


The fourth season of Newhart runs 24 episodes and is spread out evenly over three discs, and all episodes are presented in 1.33:1 full frame video, consistent and faithful to the original broadcasts. I would note that the show has not gone through any image processing and appears as natural as can be, with numerous instances of dirt, scratches and artifacts in the print, along with film that connects to different shots to segue to the fadeout to an exterior shot. It looks like a shot in the mid-80s in Vermont but on a California soundstage, that is for certain.


The Dolby mono track for Newhart sounds about as good as one would expect for a show of modest production values. Dialogue is consistent with little drop-offs, and there were no artificial hisses or chirping during listening that I could pick up on. The laughter and applause that comes from being "filmed in front of a live audience" is as anticipated and without little complaint.


Nothing here son. Like you were expecting something different I guess?


Admittedly in today's age where television comedies try to pack as many jokes into 20 minutes, shifting their means of storytelling from show to show and (depending on the selections) episode to episode, Newhart and its almost 25 minutes in length per episode and its some deadpan main character can be a challenging shift from the norm. But it is not a bad show and you can start from pretty much anywhere in its run and enjoy the yuks if you are inclined.