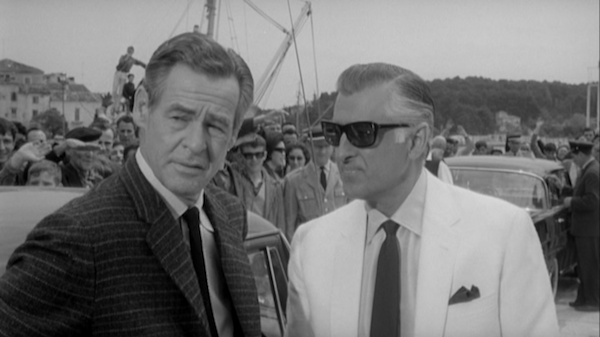 The 1964 film The Crooked Road is an English production, seemingly set in a fictional corner of the Mediterranean, and filmed entirely in gloriously cost-effective Yugoslavia. Those simple facts might help to explain the variety of vague, unconvincing accents throughout the film and also maybe why it feels like everyone involved is just doing it for the paycheck. The Crooked Road is not Z-grade schlock, and director Don Chaffey (One Million Years B.C., Pete's Dragon) mounts a good-looking production that makes the best of what must have been a low budget, but the film too often alternates between engaging scenes of intrigue and dull, repetitive dialogue. Even though The Crooked Road only runs a little over 90 minutes, it would have been enormously beneficial if the editor would have been allowed at least one more pass on the film to remove some of its obvious flab.

Robert Ryan (Bad Day at Black Rock, Men in War) takes a break from playing baddies and military personnel to appear as a muckraking American journalist named Richard Ashley, who is intent on exposing a corrupt prime minister for misappropriating American money. Stewart Granger (King Solomon's Mines, Scaramouche) plays the Duke of Orgagna, the corrupt politician in question, who uses his network of hired thugs to prevent Ashley from getting his hands on some damning letters before an impending election. An informant attempts to sell Ashley the letters, but he is kidnapped by the Duke's men before the exchange can be made. The Duke's men are unsuccessful in recovering the letters, since the informant dropped them off with his sister Elena (Katherine Woodville) as a precaution. While trying to beat the information out of him, the Duke's men accidentally kill the informant. They aren't completely heartbroken, since they just toss his body in front of Ashley's car (speeding down a crooked road, naturally) and frame him for the murder.

Now, here is where things get twisty (but not satisfyingly so). Ashley was driving in the car with Cosima (Nadia Gray), an old flame who happens to currently be the Duchess of Orgagna. Unsurprisingly, the Duke is not fond of his wife cavorting with the man who wishes to ruin him in the press. The Duke doesn't have much room to talk, though, since Elena -- yes, the Elena whose brother entrusted her with the damning evidence -- is the Duke's live-in mistress. Making good on the old adage about keeping one's enemies closer, the Duke convinces local law enforcement to allow Ashley to be remanded to the Duke's nearby island villa while the cops investigate the alleged vehicular manslaughter. This house arrest (or island villa arrest) is to last until after the election, rendering Ashley's exposé moot. This forces Ashley to figure out a way to quickly convince Elena to give him the evidence and get it off the island without being shot by thugs.

It's a solid premise that could have made for a pulpy little potboiler, if not for the indifferent execution and not-quite-right acting. Ryan's performance, for example, wavers between seeming passionate and oddly stilted -- sometimes, I think this is the fault of that pesky editing, since certain shots linger a little too long after Ryan has spoken, throwing off the rhythm of the dialogue. Granger, meanwhile, is an utterly magnetic bad guy with an oddly easygoing attitude. Maybe it's because of Granger's inexperience with villainous roles, but his performance lacks any menace to counterbalance his charm. He's great fun to watch, but he rarely comes across as a threat. The two main women, playing Cosima and Elena, look their parts but seem miscast. There's no real chemistry between either of them and Ryan, which turns out to be fatal, since the final sections of the film depend on us buying that Ashley is still so in love with Cosima that he would jeopardize his news story for her benefit.

As with too much of The Crooked Road, the resolution is unbalanced and suddenly focused on aspects of the story that had previously played like filler. The cat-and-mouse between Ryan and Granger's characters and the struggle to get the letters off the island are both exponentially more compelling than whether some dried up old romance can be rekindled. While the film is not a total bust, it spends too much time stranding two wonderful lead actors in the middle of a convoluted muddle. 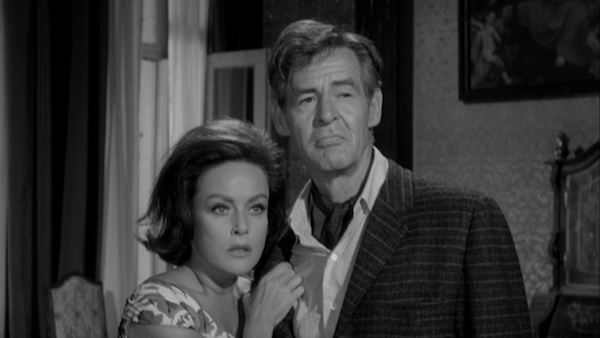 The DVD
The Crooked Road comes to viewers via the Warner Archive Collection of manufactured-on-demand DVD-R discs.

The Video:
On the video side, this widescreen 1.78:1* transfer is strong. There is a high level of clarity and detail, and there's a very good range of contrast for this black-and-white film. Also, I spotted no issues with digital noise or artifacting. On the film side, though, the materials are a little beaten-up. There are no major slices or splices, but the image is often full of dirt and other specks. The heaviest instances come before and after optical transitions (dissolves, wipes), and during the original reel changes. There are long stretches where the dirt is minimal, and the specks never completely overshadow the film, but whoever did the transfer clearly didn't take the time to spiff it up digitally.

*I can't find verification of the film's original theatrical aspect ratio, but I'm presuming it was shot open-matte so it could be cropped to different sizes later. This presentation is a little bit tighter than period-appropriate 1.66:1, but it seems like nothing important has been lost at the top or bottom of the frame.

The Audio:
Just a standard old-fashioned Dolby 2.0 mono audio track. No subtitles. Typically the dialogue and music sound good, not great, but there are a handful of instances where the spoken "s"s got very hissy. Also, in a few scenes, Nadia Gray's dialogue was distinctly muffled compared to the other actors. (Maybe she wasn't around to re-record her dialogue but the others were.)

Final Thoughts:
Stewart Granger fans might want to check this film out, just because the actor gives a wonderfully cheeky, mischievous performance without going full-ham. Robert Ryan fans will probably be better served by one of his many other films (like the recently reissued Men in War, which I mentioned above). If you don't fall neatly into either of those camps, but you like low-budget '60s curiosities, then I say Rent It. 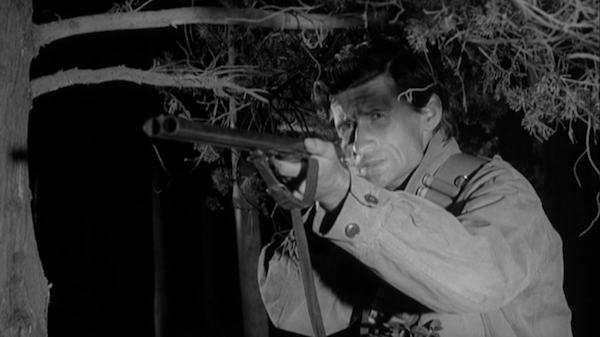