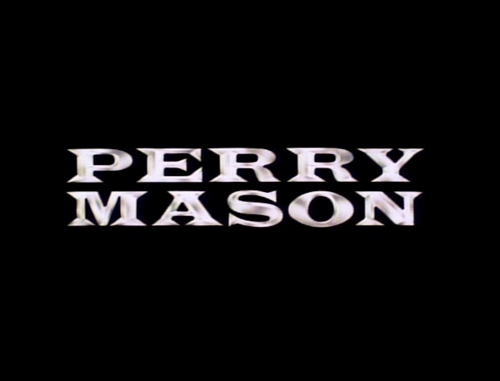 This past New Year's Eve, Paramount put out a three-disc set of six TV movies from the 1980s that starred Raymond Burr reprising his classic role as the almost preternaturally wise defense attorney Perry Mason. A second DVD set followed, with a third slated for August. Now, Paramount is doubling back and releasing each of these two-fer discs as stand-alone releases. Presumably, these single-disc versions are targeted at casual fans of the Perry Mason movies, who don't feel the need to empty their wallet on the pricey box sets. This particular double feature is identical to the second disc of the first Perry Mason Movie Collection box set. (The first disc is reviewed by DVD Talk here.)

), which is a particularly weak variation on an episode from the original Perry Mason series' ninth season called "The Case of the Final Fadeout." Once again, we are allowed to peek behind the scenes at the exciting world of film and TV production and once again someone is killed when a prop gun is loaded with live ammunition. The problem is that this time around, the details of the plot are frequently head-slappingly ludicrous. Jake and the Fatman's Joe Penny stars as Robert McCay, an action star/director (you know, like Mel Gibson but not bigoted) who takes a gun from his movie's prop van to go play a prank with his friend, talk show host Steve Carr (a sadly underused Alan Thicke). Robert pretends to shoot Steve on the air but someone switched the blanks for live ammo, and this (incredibly dumb) prank turns deadly. Luckily, Perry Mason takes Robert's case, maybe because he is sympathetic to the plight of famous morons who commit murder in front of millions of viewers.

Perry's private investigator Paul Drake Jr. (William Katt aka The Greatest American Hero) makes a general nuisance of himself, snooping around the set of Robert's action film and being generally accusatory toward every other person he meets. While almost every scene of Shooting Star strains credulity beyond the breaking point, it is most difficult to believe that a real live film company would let Paul just wander around on their active film set. Twice during the movie, Paul wanders into the middle of a stunt without so much as a production assistant's protests. During the second of these stunts, in what is clearly a misfired attempt at comic relief, Paul manages to get into a car right as the stuntman performs a dangerous flip. The scene should end with Paul getting killed, the movie getting scrapped, and the negligent crew getting blacklisted. But really this scene has about as much connection to reality as anything else in Shooting Star, which ends with possibly the thinnest defense in the history of TV courtroom dramas. Nonetheless, the real killer is predictably inspired to stand up in the courtroom and declare their own guilt. 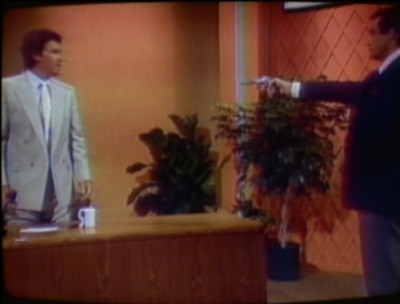 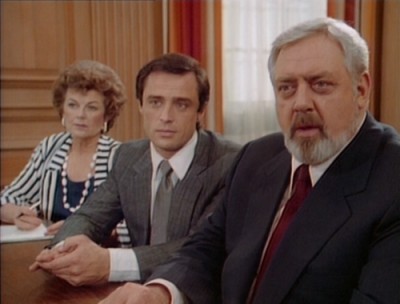 The second movie, The Case of the Lost Love (

), is not the sharpest piece of writing to have ever aired on television, but it feels like a towering achievement compared to the prior selection. Lost Love is much more interesting, funnier (in the funny moments), and far less insulting to the intelligence of its viewers. (What's astonishing about this drastic difference in quality is that the writing and directing credits are the same on both of these stories.)

This time around, Perry defends Glenn Robertson (The War of the Worlds' Gene Barry), who is the husband of an old love of Perry's from thirty years before, Laura Robertson (Jean Simmons from Kubrick's Spartacus). Already the dynamic of this set-up is ten times more interesting than what Shooting Star had to offer, with plenty of room for jealousy and distrust between client and attorney. And Glenn isn't the only one who is jealous of the reunited ex-flames: at one point, Perry's assistant Della Street (Barbara Hale, who is thankfully allotted much more screen time this time around) gets into a superficially polite but hilariously tense conversation with Laura about whether or not she is more than just Perry's assistant.

Glenn is up for the murder of a private eye, Luke Dickson (Breaking Bad's Jonathan Banks, pleasantly hammy). Laura is about to be appointed to the U.S. Senate, and Dickson thought that made it an opportune moment to blackmail her husband with records, showing that the future senator had spent time in a mental hospital. Unfortunately, when Glenn arrives at the blackmailer's motel with the payoff, Dickson is already dead. In a series of moves that are fairly dunder-headed (but not quite shoot-a-guy-on-national-TV-stupid, so I'll still suspend disbelief), Glenn proceeds to get his fingerprints all over the crime scene, drop his cigarette case on the carpet, and then leave in plain view of the motel manager for easy identification.

William Katt's characterization of Paul comes off as funny and charming this time instead of stupid and annoying, which is a major upgrade. His investigative scenes are also much better, with more intriguing and exciting action, as Paul tries to find out the identity of a mystery man who fled from the blackmailer's office.

Raymond Burr is a perfect match for his role, as always (even in Shooting Star, he's the one dependably watchable element). As Perry, Burr exudes stoic authority, but it's always coupled with a warm emotional core.

The supporting cast is full of familiar faces, like M*A*S*H's David Ogden Stiers as the supercilious prosecutor (a role he took on for eight of these Perry Mason movies). Character actor Robert Walden gets a nice My Cousin Vinny-ish scene as a football-loving witness. I have to wonder what the casting people were thinking, though, when they put both Soap's Robert Mandan and WKRP in Cincinnati's Gordon Jump as different characters in the same episode, since they might as well be the same person. (Do a Google image search if you don't know what I mean.)

Even though the shocking courtroom revelation of Lost Love is no more realistic than the one in Shooting Star, it feels truer to the characters as we've come to know them and packs a slight emotional wallop. For formulaic TV, The Case of the Lost Love is well-made and consistently entertaining. 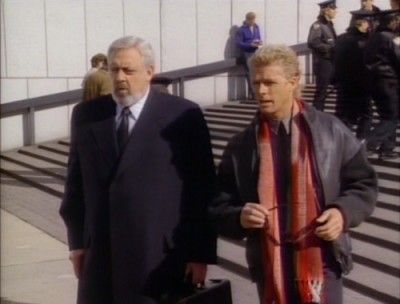 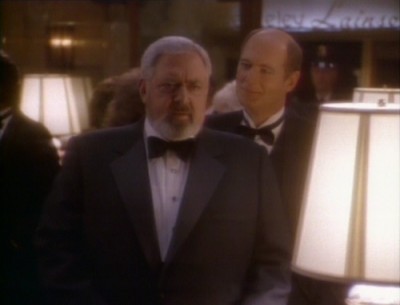 The Video:
Both movies are presented as standard 1.33:1 and neither have been remastered in any meaningful way. Although they were shot on film, both of these presentations are pure '80s analog broadcast quality in all its indistinct, problematic glory. Lost Love seems to have less clarity than Shooting Star, but it seems like a choice, with a lot of diffused lighting and maybe even some filtration and smoke to soften up the image. Considering that the majority of the cast is aged 50 and up, clearly they didn't want the audience to focus too much on all those wrinkles.

The Audio:
Both movies come in a Dolby 2.0 stereo mix, with varying degrees of success. Shooting Star frequently feels flat and gutless and is often marred by surface noise. Lost Love, on the other hand, has a surprisingly strong mix that integrates the score and the dialogue with a decent amount of panache. I noticed no surface noise issue on this second movie either. Subtitles-wise, both movies come with English SDH.

Final Thoughts:
I'm not sure if there are enough Alan Thicke or Jonathan Banks completists out there to really make this a top seller, but hey... you never know. If you're nostalgic for the '80s TV iteration of the Perry Mason character, but you don't want to pay for a full three-DVD box set, I'm not convinced that this is the double feature you should reach for first. The second "Case" featured on this disc is a winner, but oh man, is that first one a badly executed stinker! If you're a hardcore fan, you've already sprung for the box set at this point; for the casual viewer, I suggest Rent It. 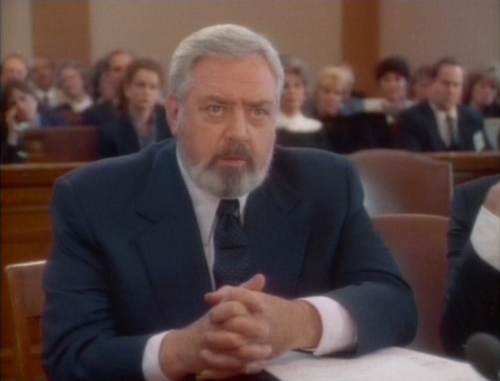