There's a point early on in Lucy when the Adam to her Eve, a dimwitted club kid who puts her in harm's way and starts her off on her moronic adventure, informs Lucy (Scarlett Johansson) that hers is the name of the first known woman. In case we don't get his point, Luc Besson, the intellectual vacuum that expelled Lucy from its emptiness and into the world, cuts to a museum where we can see a replica of the evolutionary throwback that his mouth-breathing mouthpiece intends. I assume this is some kind of sleight-of-hand, since this is not the Lucy that the movie really brings to mind. Rather, she is Lucy Van Pelt from Peanuts, and this flick is Besson's latest cinematic football just waiting to be yanked out of our eager paths. We, as a whole, are Charlie Brown, rushing in time and time again to be disappointed by the once-interesting auteur who gave us La Femme Nikita and Leon: The Professional.

Lucy should have been so easy to get right. We saw it in the trailers. Johansson, fresh off Captain America: The Winter Soldier, appeared to have stealthily made the Black Widow movie Marvel Comics is too scared to make while her corporate overlords were looking the other way. I almost want to encourage you to go see this because, if Lucy fails, the studio fatheads will use it as more fodder for their arguments that female action stars can't carry a movie. The thing is, it's a false equivalency. Lucy is not the action spectacle Besson and his crew have been selling us. It's a dopey superhero wannabe that eventually moves its lady lead out of the skirmish and into a chair in an empty room while she lets a French cop protect her from the bad guys. This is not an exaggeration. Lucy spends the climax of her own movie sitting down and thinking real hard about what she's done...and could do. Bum-bum-bum.

For those in the dark, Lucy is the story of an average girl who, through mishaps and malicious intention, ends up injected with an experimental drug that synthesizes a chemical that pregnant mothers allegedly create in the womb to give to their children and stimulate their growth. Set loose in Lucy's system in mass quantities, it triggers a rapid replication of cells and accelerated evolution. To lend this nonsense weight, Besson has hired Morgan Freeman to play a professor whose lecture about how human beings only use 10% of their brain capacity is cut into Lucy's early metamorphosis, a sort of running commentary to explain that, as her brain expands, she will get telekinetic powers, increased intelligence, rapid healing, and all other manner of mutations, including but not limited to controlling telephones, airwaves, and other men's minds.

Lucy's mission then becomes to gobble up enough of the new drug (and she does gobble, just you wait) while staying one step ahead of the Taiwanese crime boss that wants her dead. When she connects with Morgan Freeman, he vows to help her attain evolutional supremacy. Though the world may not be ready for all the knowledge she has accrued, they'll find a way for Lucy to share before her body rebels. 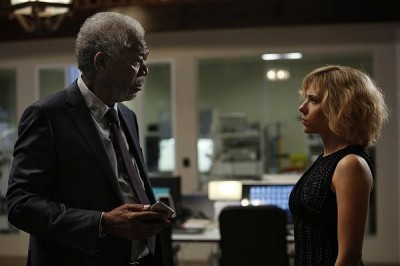 Trust me, it makes more sense when I explain it than it does while it's happening. Ironically, for a movie about exaggerated intelligence, Lucy is extremely stupid. Besson connects his heroine to the history of the universe and the origin of life, making Lucy a kind of Tree of Life for morons. Though, its gory sci-fi finish is maybe a little more Akira for dipshits. I don't know. It's just bad. I can forgive that the whole "you only use 10% of your brain" thing is malarkey, because who cares? I didn't go see Lucy for realism. On the other hand, it's a little hard to get past the fact that Besson gives his film no internal logic. For instance, just because Lucy can suddenly read webpages at a faster speed than you and I doesn't mean she can also make wi-fi better and increase the speed and capacity of a laptop's internal processors. It's like saying that because Superman is faster than a speeding bullet, if he fires a pistol, its bullet goes faster.

Johansson, who can generally do no wrong in my eyes, does her level best here. She's actually quite good in the first 1/3 of the movie, convincingly moving from panicked and fearful and into a confident curiosity. Under Besson's writing and direction, however, her character arc takes a kind of reverse trajectory to her Under the Skin role. The smarter she grows, she becomes more super and less human. The script leaves her with little to do and no cogent thoughts to express. Besson imagines the hyper-smart as a sort of savant. One assumes Johansson's vacant expression is just meant to mirror our own as her talent erodes before our eyes.

The sad part is that even Besson's higher ambitions are laughable. The opening sequences of Lucy feature lots of arty montages that show us natural predators devouring their natural prey. As juxtaposition, when Freeman talks about the survival instinct and the desire of intelligent beings to reproduce, we see various animals rutting in the weeds. This style vanishes once the point is made. Rather than Lucy being just another animal navigating the world via heightened senses and an instinct to dominate, she becomes an unknowable mystery, a cipher in her own story. It's practically anti-feminist in its vision. The smarter you become, ladies, the less interesting and desirable!

And there's that irony again. The dumber Lucy becomes, the less you're going to find it worth sitting through. 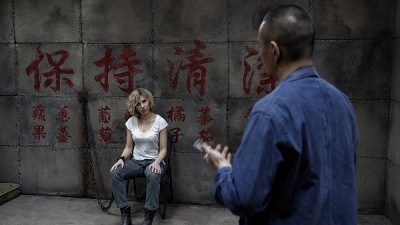