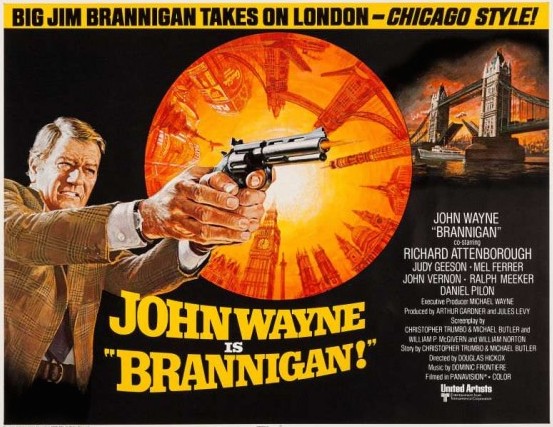 "You dirty, lousy Mick! You got no rules!"

Of course not. When you're a tough, old supercop who is a little Dirty Harry, a little Bullitt, and all John Wayne, you make your own rules. That's the conceit, at least, of the 1975 fish-out-of-water cop thriller Brannigan.

Chicago cop Brannigan is on the trail of a big time racketeer named Larkin (John Vernon, who was both the mayor in Dirty Harry and Dean Wormer in Animal House). When Larkin skips the country, that means that Brannigan gets sent to London with extradition duty. (If Brannigan was made in the '80s and not the '70s, the dialogue probably would have made it clear that this assignment was partly cooked up to get this cowboy cop out of the chief's hair for a while, but the script -- credited to four screenwriters -- stops short of that.) Against his better judgment, Larkin's attorney (Mel Ferrer) informs the cops that while out on bail, the high-profile Larkin has gotten himself kidnapped by some English thugs looking to ransom him for some long green. So rather than just picking up his prisoner from Scotland Yard, now Brannigan has to collaborate with the Yard to get him back from some other bad guys.

Though Brannigan is clearly John Wayne's attempt to remain modern in a marketplace where the lone cowboy hero has been replaced by the renegade cop hero, nothing about the story feels particularly new. Predictably, the British cops find Brannigan to be a handful but they respect him for it. Richard Attenborough is great fun as the commander, Swann, who gets deadly serious when he demands Brannigan get rid of his .38 Colt revolver, but is clearly as much of a detective at heart as Brannigan, based on his enthusiasm for playing "bad cop" during interrogations. Judy Geeson plays Brannigan's police escort/demi-partner Jennifer, a role which Geeson reveals on the commentary was originally meant for Vanessa Redgrave before the production decided maybe the two actors' conflicting politics might be too problematic for the shoot. Jennifer is left to be blandly likable, in Geeson's hands, responding to Brannigan's alternately paternal and lecherous comments with indifferent acceptance. Fortunately, the film doesn't try to foist a stomach-churning, age-inappropriate romance on us, but it seems to justify the lack of romantic heat by stripping Jennifer's character of all but the most basic personality.

The action setpieces are all solidly entertaining. To get up close to a suspect, Brannigan and Swann instigate a pub brawl (approximated beautifully by the illustrated cover of the new Blu-ray) that shows The Duke hadn't completely left the Western and its hallmarks behind. An elaborate ransom money drop feels too much like the wild goose chase Dirty Harry is put through in his first film to not stink like an oversold red herring, but the construction of that sequence is solid. Every cop picture must have a car chase, and inevitably Brannigan commandeers a meek citizen's brand-new sports car and proceeds to total it.

Director Douglas Hickox (Zulu Dawn) doesn't bring a lot of new ideas to the cop genre, but he keeps the story enjoyably brisk and maybe most importantly, he embarrasses neither himself nor his nearly 70-year-old action hero in the process.

The Blu-ray
As with most Twilight Time releases, Brannigan is available in a limited edition of 3000 copies, complete with a color booklet and essay by film historian Julie Kirgo.

The Video:
The AVC-encoded 1080p 2.35:1 transfer is not a stunner, but the film's pseudo-gritty look, which feels almost like vintage TV drama in places, isn't really designed to wow. Though the colors are all a little dull, this seems by design. The image is a little soft in places, but overall the clarity matches typical HD expectations. The film print has very little dirt to muck it up, and the grain structure seems to be intact. A solid, if undistinguished, presentation.

The Audio:
A nice, clear DTS-HD MA 1.0 audio track. The dialogue and score mix flawlessly, while the effects (gunshots, tires screeching, etc.) have surprising heft for a mono mix.