Growing up as a ‘yute' in the Mid-Atlantic, the fact that I was able to watch both the World Wrestling Federation or WWF (now WWE) and National Wrestling Alliance or NWA (the latter becoming WCW eventually) made me a bit of a lucky guy. And when the Mid-Atlantic decided to do a summer stadium event and call it The Great American Bash because it was held in July, naturally I wanted to go and eventually did when it came to my town. It is hard to believe it has been almost 30 years since that first show, but the WWE has released a retrospective of the pay per view's greatest hits, with the subtitle "United We Slam." 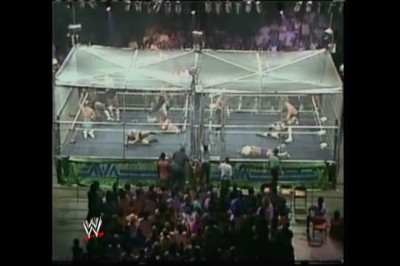 The show is hosted by NWA and overall pro wrestling icon Dusty Rhodes. Rhodes was part of the territory in Florida when I first noticed him and he rose through the ranks of the NWA and spent time in the WWF as well, albeit horribly gimmicked at times I must say. The three-disc set is less a retrospective with those involved and more occasional remembrances from Rhodes and thoughts on how the scene is today for sports entertainment.

The set starts from the first matches of the Bash held in Charlotte, North Carolina (where I think musician David Allan Coe played a mini concert in between some of the matches on the card). It includes some greats and some ‘goods,' and the matches are as follows:

Now I like Rhodes' role at the center of all of this, but the lack of participation from other key figures to recount this, or involvement by folks whom out loud you wonder, "what the heck are they doing here?" is palpable. Larry Zbyszko is not only interviewed for a moment, but he joins Rhodes to provide commentary on or in Zbyszko's case, recollections of the time. He does not seem to shed much light on the matches he and Rhodes talk about, other that he may have gotten married that year. Mike Graham, an old friend of Rhodes' from the Florida days stops by to help commentate on a match but again, nothing to speak of. About the only thing of note Rhodes says on his commentaries is while he was NWA booker for a time, he booked himself to the Championship which, well, no crap Sherlock.

Now to be sure, United We Slam is a leisurely look back at one of the tent pole moments in NWA and WCW history. But there is a difference between just putting the matches together and occasionally have a guy talk about them, and another when you can interview a lot of those guys from that time (many of which I add are on the WWE payrolls these days I might add). The material is decent, but the presentation is nothing remotely close to similar releases have been recently. 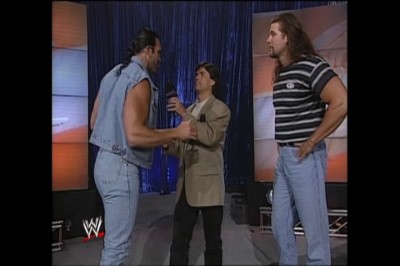 
The modern interview stuff with Rhodes all appears in 1.78:1 anamorphic widescreen and looks good, though there are hints of image noise because of all the LED lighting occurring in the lights behind him/around the rink where he is hosting this shindig. But the matches are reproduced nicely with some artifacts inherent in the source from the early first handful of matches. After that, things look as good as I can recall them, with North Carolina not having the best of production values back in the day.


Dolby Digital 5.1 surround for the interviews, and more of a two-channel setup for the matches, if that. Seeing young Jim Ross on television was good, but hearing young Jim Ross on DVD broadcasting matches from the late ‘80s sounds clear as a bell, with little discernible hisses or chirps in the material. All in all, it sounds like what I expected it to, with nary a complaint to be had.


All the matches, none of the extras.


While I think matches like Sting-Muta and Flair-Funk in Baltimore may not have been on a disc before (I could be wrong), a lot of the good stuff has seen prior release in other sets. So for whatever price that United We Slam may be these days, its straightforward delivery without any sort of frills does not make it the kind of set it could have been in any other hands. Technically it is decent and supplementally, it is the usual. It was a fun romp through the past at least.