Entertainment One // Unrated // July 29, 2014
List Price: $34.98 [Buy now and save at Amazon]
Review by Stuart Galbraith IV | posted August 19, 2014 | E-mail the Author
On My Way (Elle s'en va, 2013) is an engrossing French humanist drama starring Catherine Deneuve as a 60-something former beauty queen forced to confront estranged family relationships and her own general unhappiness when on a whim she abandons her livelihood and takes to the road. Directed by actress Emmanuelle Bercot (Clément) the deliberately paced film proves an ideal vehicle for Deneuve as she approaches the crossroads of old age - the part was written especially for her - and her subtle performance, expressing many unstated emotions, holds its story together.

Cohen Media's Blu-ray of On My Way, shot digitally, offers good picture and sound, as well as, among other things, an enlightening interview with Deneuve herself. 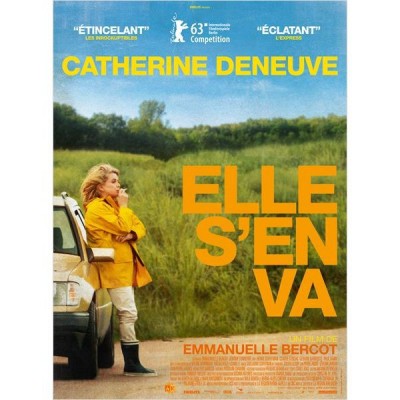 Bettie (Deneuve) is a small town restaurateur in provincial Brittany. She lives, unhappily, with her elderly mother (Claude Gensac) in the house she grew up in, still smarting from a longtime affair with a married man who in turn has left both women for a 25-year-old. In the middle of her struggling restaurant's lunchtime rush, the overwhelmed Bettie jumps in her Mercedes and simply drives off.

The first hour of the 116-minute film follows Bettie on her aimless odyssey, where her main concern is finding cigarettes (apparently quite pricey and hard-to-find in rural France on Sundays) to feed her addiction. In an amusing early scene, she accepts a doddering old man's offer of one from his apparently ancient tobacco and rolling paper, her patience tested as he struggles to roll her a smoke with his swollen, arthritic hands.

Bettie ends up at a local hangout where a man (Paul Hamy) half her age gets her drunk and beds her down for the night. The next evening, following a panic attack, Bettie spends in a closed-up furniture store, sheltered by a kindly security guard there. In another fine scene Bettie attempts to intercede at a freeway stop café when an abusive husband begins beating his submissive, self-destructive wife, and for her trouble Bettie is threatened and verbally abused by both husband and wife.

In the midst of all this, she receives a call from Muriel (Camille), Bettie's long-estranged adult daughter, demanding she escort Bettie's 11-year-old grandson, Charly (Nemo Schiffman) to his paternal grandfather's (Gérard Garouste) house in central France while she interviews for a job she desperately needs. The film's second half has Charly joining Bettie's road trip, a journey climaxing with Bettie confronting her bitter daughter after many years of virtually no contact.

Though she plays a woman in her early sixties, in fact Deneuve was pushing 70 while filming On My Way and looks it. She hasn't lost her extraordinary beauty and poise, but neither does Bercot make any attempt to hide Deneuve's age (or paunchy stomach, referenced in an early line of dialogue). Like Diane Keaton in the somewhat similar Something's Gotta Give (2003), Deneuve bravely allows herself to be photographed in all her liver-spotted glory. In short, she's old and yet still quite beautiful at once.

The movie will resonate particularly for those with dysfunctional, estranged families like the one presented here. Bettie clings to past disappointments, including a "one true love" that died in a late-sixties car accident while she was competing as Miss Brittany. (This is, perhaps, a strange reference to the death of Deneuve's sister, Françoise Dorléac, who died that way in 1967.) She seems to have buried her feelings in her work until that becomes yet another source of stress, especially with her ever-present mother, the restaurant's cashier, constantly reminding Bettie of her unhappiness.

What might have been a sugary grandmother-grandson road trip/bonding movie instead is more emotionally real than one might have expected. Like most French children, Charly is relatively mature for his age, inquiring about Bettie's sex life and other interests, alternately behaving like a little adult but with the freewheeling kid still peeking through here and there. A reunion of Miss France contestants might also have been insufferably cute, but instead takes on a genuine poignancy as these now older ladies, having moved on with their lives in varied directions, revisit a bit of the glamour they enjoyed when they were barely out of their teens. (One of the former contestants is played by another French cinematic icon, Mylène Demongeot.)

All of Bettie's suffering in the first two-thirds of the film pays off when she's confronted by her daughter, Muriel, who resents Bettie's seeming emotional selfishness and inability to love her and Charly, and the healing that begins when she realizes that over the course of their little odyssey the relationship between Bettie and Charly has transformed into something else.

Shot digitally, On My Way is presented in 1.78:1 widescreen and up to contemporary film standards. The color and detail are good, though the movie does look a little too much like video rather than film at times. The 5.1 DTS-HD Master Audio is also fine, a modest but occasionally effective mix, as are the English subtitles.

Supplements include deleted scenes in standard def, the aforementioned interview (in English) with Deneuve, and a direct-to-video style trailer.

A slight but intelligent and inviting drama, On My Way is unreservedly Recommended.