Musical biopics are the worst. They tend to exhibit the most infuriating aspects of regular biopics -- the many shortcuts screenwriters take to squeeze a human life into three acts and 120 pages -- plus they have an added requirement: they gotta play the hits. Literally. Writers of musical biopics have to find a way to shoehorn the songs we all know and love into the story somehow, or else folks will ask for their money back.

Needless to say, they usually fulfill this requirement poorly. The insultingly formulaic Ray has a scene where Ray Charles writes "Hit The Road Jack" while fighting with a lover, the fight helping to inspire each new line. Two problems: 1) No real person writes a song that way and 2) Ray Charles didn't even write "Hit The Road Jack" (Percy Mayfield did). Walk the Line, which is much easier to swallow overall than Ray, still presses it luck with a scene where Resse Witherspoon, as June Carter, sits alone, thinks about Johnny Cash, and mutters, "It burns, it burns." Shortly thereafter, Joaquin Phoenix, as Cash, is seen singing "Ring of Fire," with its catchy "And it burns, burns, burns" chorus. (At least the movie bothered to acknowledge that June wrote the song [with Merle Kilgore] and not Johnny.)

For pop culture nerds like myself -- who pride ourselves on the tiny bits of specific knowledge about music we've amassed -- these fact-fudging shortcuts can be infuriating...

Which brings us to the new-to-Blu-ray musical biopic from 1978, The Buddy Holly Story, with Oscar nominee Gary Busey in the title role. I love the music of Buddy Holly, but admittedly I've never read a book on him. Still, armed with the tiny morsels of knowledge I've collected from liner-note essays and some plain ol' common sense, it is apparent that most of The Buddy Holly Story is about as true to life as Abraham Lincoln: Vampire Hunter.

No, Holly's band didn't go by the name "The Crickets" because they heard one chirping in their practice space. No, the hit version of "That'll Be The Day" wasn't recorded off the cuff during a roller-rink gig. No, Buddy did not force his record company to make him the producer on all his own songs (although -- fun fact -- he did produce some early Waylon Jennings tracks). It's more than a little maddening that the film devotes whole scenes to establishing all this untrue gobbledygook. 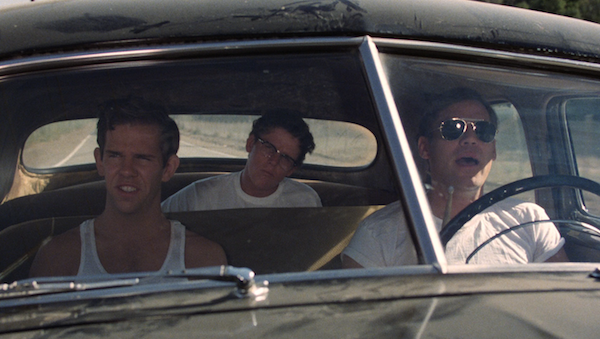 Yet, despite the wild yarn-spinning, The Buddy Holly Story is a solidly entertaining movie that does a pretty good job of translating the spirit and energy of Buddy's music. Yes, I may have spent much of my time watching the film saying, "No... No... Wrong... No... Wrong...," but I also probably spent as much time bopping my head to the music. First-time director Steve Rash did right when he decided that all the music should be recorded live on screen (mostly; there are clearly some instrumental overdubs here and there). Busey might not have a 100 percent accurate grasp of the lyrics, but he can echo Holly's unique vocalizations and bash out three or four chords with the gusto and flair of a real-deal rocker.

The entire pitch-perfect cast has much to do with the film's appeal as well. While Busey, with his natural Texas drawl and mouth overflowing with teeth, is incredibly disarming as the influential young rock-and-roller, The Amityville Horror's Don Stroud and American Graffiti's Charles Martin Smith are just as appealing, as the fictionalized Crickets. (The real Crickets sold their life rights to a different Buddy Holly project that fell apart before hitting the screen.)

There's a believable rapport between the three band members, whether they're practicing in Buddy's garage, working out an early draft of "Peggy Sue" while driving cross-country, or goofing on each other during recording sessions. As befits his All-American boyish looks, Smith is the more clean-cut and upbeat member of the rhythm section, while Stroud is the dark-spirited, rowdy S.O.B. behind the drums, who gets fed-up with showbiz and mutters racist jokes about Buddy's Puerto Rican fiancee Maria (Maria Richwine). Of course, Stroud's turn toward meanness feels more than a little like conflict for the sake of conflict (Buddy's real-life drummer Jerry Allison was reportedly horrified to see his stand-in made into a bigot).

The standout moments of the film are certainly the concert scenes, which perfectly communicate the electricity of a live rock show and illustrate the drama and power of a performer like Buddy much more effectively than any plot contrivance. Whether trying to win over an all-black audience at the Apollo Theater or strutting around during a cover of "Whole Lotta Shakin' Goin' On" after The Crickets are headliners, Busey's version of Buddy never fails to leave it all out there on the stage.

Would The Buddy Holly Story have turned out better if they had just changed all the names, kept the songs, and made it about an explicitly fictional band? Maybe... maybe not. As it stands, the film is a toe-tapping little number that works best if you just forget the facts and go with the flow, daddy-o. 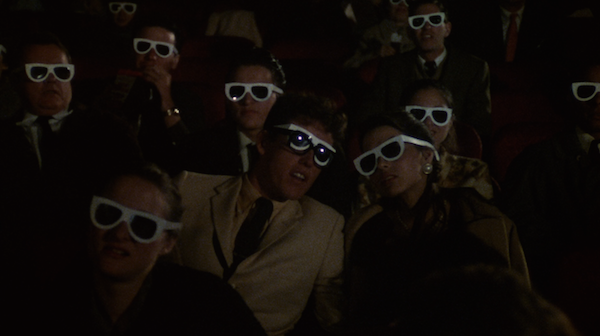 The Blu-ray
The Buddy Holly Story comes to us from the good folks at Twilight Time in a limited edition of 3000 copies. It comes with a color booklet featuring an essay by Julie Kirgo.

The Video:
Considering the movie's age and the low-budget shooting conditions, this AVC-encoded 1080p 1.78:1 transfer is outstanding. The video is consistently stable with no noticeable damage. The colors and contrast all seem spot-on. Although some of the shots are a little soft, this seems to be coming from the film source, as most of the transfer has great depth and excellent clarity

The Audio:
The disc offers up a great-sounding DTS-HD MA 5.1 surround audio mix that really delivers during the big concert scenes. Other scenes sound good too, but are pretty much focused right up front, with a little atmosphere in the other channels. For readers, the disc provides English SDH.

- Ported over from original 1999 DVD, this commentary is awfully entertaining, as Rash and Busey have the palpable chemistry of old comrades. Busey has not totally gone into wacko self-parody / I'm With Busey mode yet, although he does briefly proselytize about his religious beliefs during the church scene in the film. Rash is happy to occasionally rein Busey in or disabuse him of incorrect recollections. Frequently Busey will say, "We improvised this," and then Rash will dutifully reply, "No, this was in the script." Otherwise, the track is full of good anecdotes and interesting information (for instance, the film was one of the earliest to use a Steadicam, as seen in the band's long journey from their dressing room to the stage of the Apollo Theater). Here and there, Rash picks apart some things he would do differently now. Meanwhile, Busey sings along to his own Buddy Holly impression. What more could you want?

Final Thoughts:
The Buddy Holly Story fails as history, but it thoroughly succeeds as entertainment. The cast and the music are undeniably likable. Recommended. 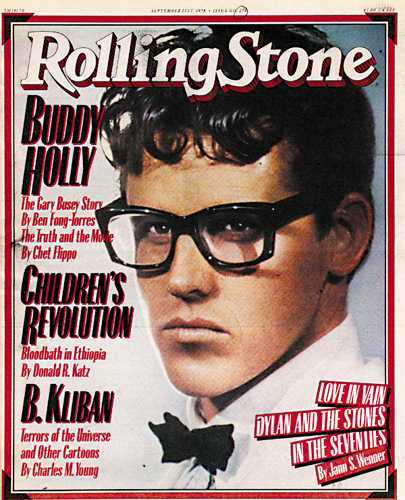