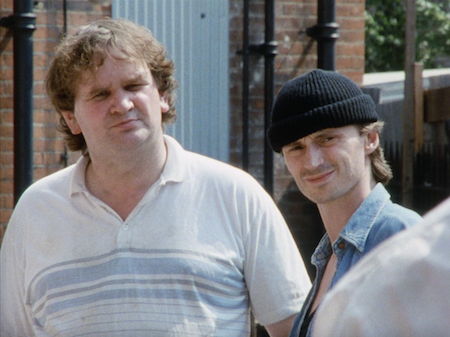 Ken Loach is best-known for quietly observed, socially conscious, naturalistic dramas about working class England. This newly reissued double-feature from the early '90s shows Loach applying his established sensibility to comedy. The end results are much dryer and sadder than what most viewers would usually associate with comedies -- so maybe the term "dramedy" is a better description -- but surprisingly Loach doesn't shy away from broad moments of physical shtick to punctuate these often sobering stories about the working poor.

The first film on the disc, 1991's Riff-Raff, is a plot-light portrait of construction workers, written by a former construction worker, Bill Jesse (who died while the film was in post-production). Unsurprisingly, Jesse and Loach capture the tone of their milieu in a totally believable, unforced manner. The workers pal around and talk shit about their hard-nosed bosses, while trying not to die on faulty scaffolding or get fired at the end of the week. When a homeless Scottish fellow (Trainspotting's Robert Carlyle) shows up looking for work, going by the name of Stevie (everyone on the job uses false names to avoid taxes), the lads immediately take a liking to him and offer to find him an empty place to squat in. From there on out, the film alternates between vignettes from the work site (the men are busy tearing down an old building so that new luxury apartments can be put up in its place) and Stevie's new relationship with a young, untalented singer named Susan (Emer McCourt).

The construction scenes tend to be the more vital half of the film, with The Royle Family's Ricky Tomlinson stealing the show as the loud and large-hearted lefty Larry. The sequence where Larry decides to leave the work site to use the bathroom in a nearby unrented luxury flat leads to one of the two biggest, broadest laughs in the film. (The other involves an ashes-scattering mishap at a funeral.)

The relationship story between Stevie and Susan meanwhile is harder to invest in, since it feels doomed from the start. It's not all arguments and crying, though. Their courtship does pleasantly involve some charming scenes where Larry and Stevie stick up for Susan and force others to appreciate her terribly mediocre singing.

To counter-balance the lightness, there's a lot of tragedy in Riff-Raff, especially in the final fifteen minutes. Some of these climactic events end up feeling a little heavy-handed and manipulative, but overall the film is quite unsentimental, warm, and humane. Loach pulls off the comedy/tragedy hybrid much better with his next film, but Riff-Raff stands as a solid effort.
Riff-Raff: 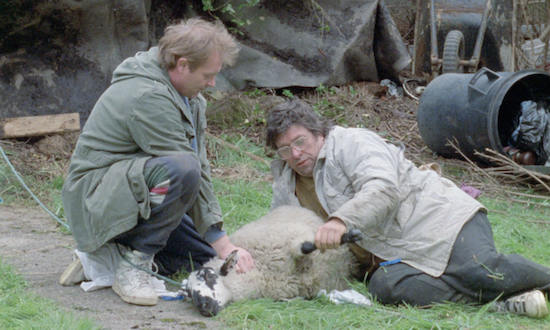 Loach reteamed with his Hidden Agenda screenwriter Jim Allen for 1993's Raining Stones, which is the director's paean to the flat broke working man, the kind of guy who seems to be perpetually on the verge of breaking even.

When we first see our hero Bob (Bruce Jones), he's kidnapping a sheep from the moors with the help of his buddy Tommy (the extremely welcome Ricky Tomlinson). The plan is to sell the fuzzy bugger to the butcher and make a mint, but it turns out that these fellas stole an old sheep, whose meat will only fetch cheap mutton prices. The lads still get the butcher to cut the sheep up; then they take the meat and try to sell it themselves down at the pub. Unsurprisingly, they don't get very far. Also, during this little meat-selling escapade, Bob's work van gets stolen out of the pub parking lot.

These events are merely the first in an ongoing series of misadventures, set off by Bob's desire to earn a little extra cash to buy a new dress for his daughter's first communion. His wife Anne (Julie Brown) advises against it, since they don't have enough money to make ends meet as it is. The priest, Father Barry (Tom Hickey), even offers to loan the family a gently used dress, so as not to strain their wallets. Bob is too proud to accept. He is not a charity case.

Bob wants to be the provider, so he looks for work. He tries to pick up odd jobs, rooting out people's drains. All he gets for his trouble is a load of shit -- literally. He tries working as a bouncer at a dance club, but he ends up getting himself bounced after tussling with a two-bit drug dealer. He takes a job stealing grass from a Conservative bowls club. Eventually, he is forced to sign on for unemployment.

As with Riff Raff, the film takes a dark turn in its final quarter -- but it is much more intense this go-round. After a loan shark ransacks Bob's place and threatens his family while he is away, Bob grabs a wrench and hunts the loan shark down. The same mad desperation that pushed Bob to undertake those comically ridiculous actions in the early part of the film now pushes him to a potential outcome that is just as ridiculous but not nearly as funny. Fortunately, Loach and Allen stick to the traditional definition of "comedy" and manage to cook up a happy ending that feels completely appropriate.

This film's tonal shifts are stark, with laugh-out-loud hilarity giving way to sequences that are emotionally harrowing. The film does not feel disjointed, though. In fact, the journey of the characters feels richer for incorporating those greater anxieties and more ecstatic catharses. Bruce Jones is instrumental in guiding the film through its different moods, because he is tremendously sympathetic as Bob, keeping the character grounded and believable, especially when he makes foolish decisions. Raining Stones is a vibrant slice of life that makes for an incredibly rewarding viewing experience.
Raining Stones: 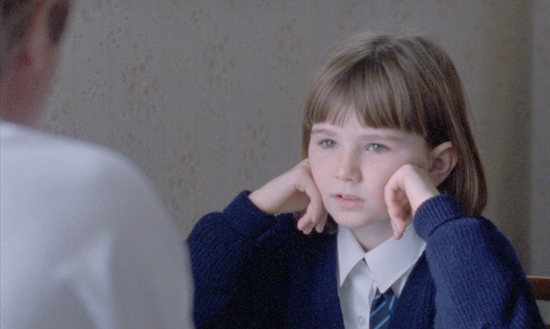 The Blu-ray
2 by Ken Loach comes to us in a limited edition of 3000 copies. As with most Twilight Time releases, it features a color booklet with an essay by Julie Kirgo.

The Video:
The cinematography on these two films, by Barry Ackroyd, has an unvarnished, grainy documentary look to it. Riff-Raff, especially. That film appears to have been shot on 16mm film with mostly available light, which means that the AVC-encoded 1080p 1.33:1 transfer is just slathered in grain. It looks good, though. Much better than if they tried to spiff it up digitally. Otherwise, apart from a few brief scratches and splotches, the film print itself looks great with natural-looking color and good clarity, considering the source. Raining Stones, meanwhile, seems to have been shot on 35mm film and the AVC-encoded 1080p 1.66:1 transfer has a more even look to it. The color palette is fairly muted, giving the film an overcast vibe, but the skin tones look healthy and life-like. Once again, the film has almost no noticeable damage and the clarity (considering the source) is quite good.

The Audio:
Riff-Raff comes with a DTS-HD MA 1.0 audio mix while Raining Stones features DTS-HD MA 2.0 audio. Both tracks are solid, with no distortion or damage. The mono track on Riff-Raff falls in line with the no-frills aesthetic of the visuals, while the stereo track on Raining Stones is a little slicker, has higher fidelity, and provides a smidge more atmosphere. Both films are fairly low-key, though, and the audio serves each story perfectly well.

This disc offers no subtitle options for either film, which seems particularly odd since Riff-Raff was originally released in theaters and on VHS in the U.S. with English subtitles burned in. Considering the different characters' thick, regional accents, I know that I missed a few lines here and there, but most of it is understandable if you concentrate.

Final Thoughts:
These two tributes to the put-upon working man in post-Thatcher Britain are funny, sad, and moving. Riff-Raff is a warm, loose look at a group of men living check-to-check. Raining Stones is a striking, realistic portrait of a beleaguered father and husband, just trying to bring home the bacon... or failing that, the mutton. Both films are Highly Recommended. 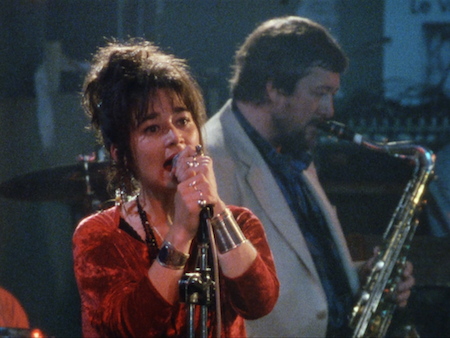