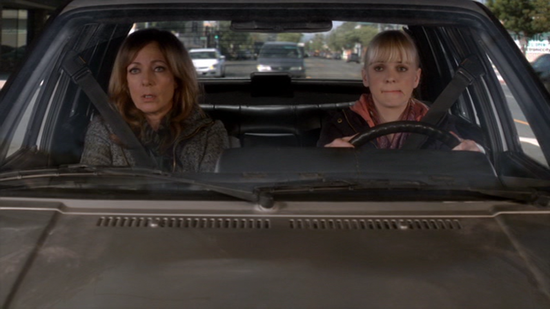 Mom was one of the pleasanter surprises of the 2013-14 television season. In many ways, the brassy three-camera sitcom is typical of the network-friendly shows produced by Chuck Lorre (The Big Bang Theory; Two and a Half Men), its broad humor delivered with a dowdy, '90s-style straightforwardness. For a seemingly average-looking show, however, Mom benefits from a large, interesting cast of characters and surprisingly perceptive story lines. A lot of the excitement of Mom's first season (now out on DVD from Warner Home Video) came from stars Anna Faris and Allison Janney as a harried single parent and her wild, irresponsible mom - both ex-substance abusers trying hard to stay straight.

A big part of Mom's appeal comes from the hilarious exasperation of Anna Faris as Christy, a newly sober single mom. Between attending Alcoholics Anonymous meetings, Christy raises two kids and works as a waitress at an upscale restaurant, carrying on an affair with her married boss, Gabriel (Nate Corddry). Christy's activities aren't lost on her sullen teenaged daughter, Violet (Sadie Calvano), who seems to have grown up more rapidly than usual in helping to look after her half-brother, Roscoe (Blake Garrett Rosenthal) and carrying on an oddly mature relationship with her dim boyfriend, Luke (Spencer Daniels). Christy also has to deal with Roscoe's mellow, pot-dealing dad, Baxter (Matt Jones) and Rudy (French Stewart), the lecherous head chef at the restaurant. Into all this hubbub, Christy gets an unwelcome visit from her formerly estranged mother, Bonnie (Allison Janney). Bonnie is also a recovered substance abuser, although her carefree, rock 'n roll attitude - and her lousy track record as a loving, attentive mom - brings out tons of pent-up resentment in Christy. The divide between casual Bonnie and prickly Christy becomes all the more inflamed when Violet announces that she's pregnant - and determined to keep her and Luke's baby.

While Mom fails to score many points for being realistic (Christy's home would never be that huge in real life, for one), it's actually a fun show which sneaks in some good insights on personal responsibility and addiction - all without seeming preachy. The chemistry between Faris and Janney is terrific, and the writers are to be congratulated for making the supporting characters as cliché-free as possible. Most of the casting is spot-on. Spencer Daniels in particular is a genuine find as Violet's dense yet well-intentioned boyfriend. With the first ten or so episodes, I kept wishing the story would focus more on Christy's family and not so much on the extraneous-seeming restaurant. Thankfully, the producers seemed to realize that as well, so as the season goes along the Gabriel affair falls to the wayside and Christy's workplace becomes less prominent (although it returns in one of the season's less thrilling moments, when Bonnie and the grating Chef Rudy decide to hook up).

The overload of lead and recurring characters makes Mom a chaotic watch, although they're so nicely written and cast that one almost doesn't notice what a crowded show it is. Chief among the supporting actors are Mimi Kennedy as Marjorie, AA meeting attendee and an old enemy of Bonnie's, Justin Long as Christy's nice-guy boyfriend, Octavia Spencer as Regina, a money manager who embezzled funds to feed her addiction, and Kevin Pollack as Alvin, Christy's dad and Bonnie's former love. Plot-wise, a lot goes on in this season, although there are still some aspects left intentionally vague for the future. This includes the identity of Violet's dad, as well as the possibility of Christy's grandmother showing up. A baby mama great-granny? That I'd like to see.

Mom was one of just three sitcoms that we bothered to tune into this past season. That doesn't include nostalgic pity-watch The Simpsons - is that considered a sitcom? - and catching up with the first three seasons of Community on Hulu. Out of that small, non-representative sample, Mom fared pretty well. The stitched-together family unit, central characters valiantly avoiding the repeat of past mistakes, and trying to survive in a sour economy allowed for some fresh, timely jokes, and it's delivered with zing by Faris and Janney (her uninhibited looseness as Bonnie deservedly won an Emmy award). Compared with the repetitive cutesy-couple blandness of Lorre's other show, The Big Bang Theory, and the desperate changes in format which the shrill 2 Broke Girls undertook in its third season, Mom came right out of the gate as a winner. 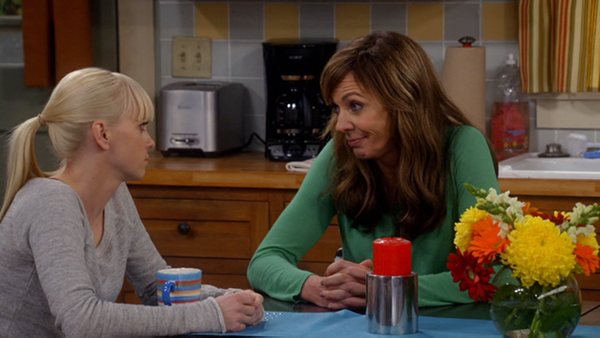 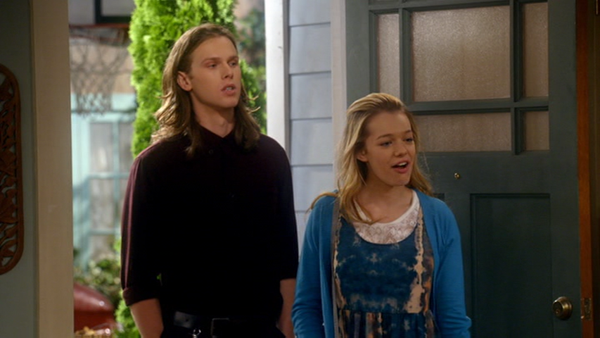 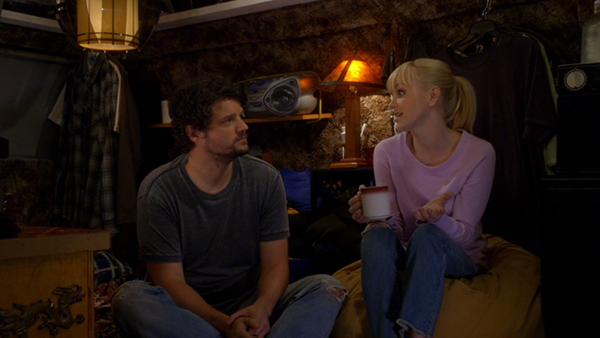 The 16x9 digitally shot image on Mom looks similar to other candy-colored, brightly lit current sitcoms. The mastering on the DVD edition has a sharp, crisp image with well-saturated color and a pleasing light/dark balance.

The discs' Dolby Digital 5.1 Surround soundtrack is a good, clean mix with pristine dialogue kept in the central channel. Each episode also includes an alternate Portuguese-dubbed soundtrack, along with subtitles in English SDH, French, Spanish, Chinese, Thai, and Portuguese.

A brief yet entertaining Gag Reel is the sole extra on this set. As with other Warner TV-on-DVD sets, a fold-out booklet with episode titles, credits and plot synopses is included as well.

Buoyed by Anna Faris and Allison Janney as ex-addicts with contrasting attitudes towards motherhood, CBS sitcom Mom had enough hilarity in its first year to make it worth revisiting. Warners' Complete First Season DVD set is a spartan but worthwhile showcase for this caffeinated, chaotic yet very promising show. Recommended. 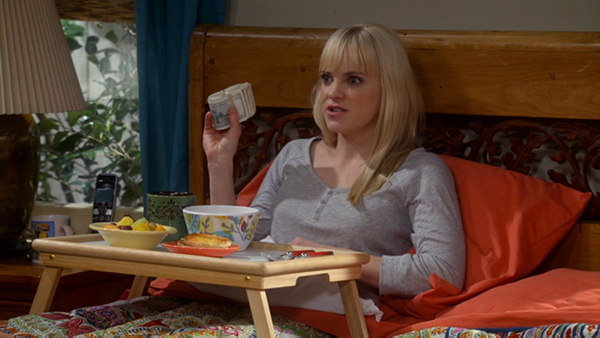