Tales From The Crypt / Vault Of Horror

Shout Factory // Unrated // December 2, 2014
List Price: $24.97 [Buy now and save at Amazon]
Review by Stuart Galbraith IV | posted December 18, 2014 | E-mail the Author
Amicus was a British film company founded by two Americans, Milton Subotsky and Max J. Rosenberg, and the only serious rival to Britain's premier horror movie producers, Hammer Films. In fact Amicus made a wide variety of pictures: teen-oriented films like It's Trad, Dad! (their first production, 1962) as well as a number of sci-fi thrillers, among them Dr. Who and the Daleks (1965), The Terrornauts (1967) and The Land That Time Forgot (1975). However, Amicus became virtually synonymous with a particular type of horror movie: anthologies, portmanteau, all essentially modern variations of the classic Dead of Night (1945).

Amicus produced seven such films. Then, when the company folded in the mid-1970s, Subotsky produced one more, The Uncanny (1977). Most offered five short tales averaging around 15 minutes in length, loosely connected to a larger, framing story. These were shrewdly made little movies. Because each segment took only a few days to shoot, Amicus was able to afford name actors. They feature genre stars Peter Cushing and/or Christopher Lee, British actors who had flirted with Hollywood stardom (Richard Greene, Joan Collins), respected stage actors who occasionally appeared in films (Ralph Richardson, Patrick Magee), up-and-coming talent (Charlotte Rampling, Tom Baker) and, sadly, a few others that had fallen on hard times, either because of personal problems (e.g., Ian Hendry) or who struggled when the once-bustling British film industry fizzled (Terry-Thomas, Richard Todd). The quality of these anthologies varied greatly, surprisingly enough. For instance, Dr. Terror's House of Horrors (1965) is enormously enjoyable, but Amicus's next one, Torture Garden (1967), is unaccountably bad.

Nevertheless, each film gets a near-perfect 1080p transfer, with Vault of Horror offered in high-def no less than three different ways, including the home video premiere of its original uncut version. The uncut version offers a bit more (though, by today's standards, extremely mild) gore, which in the shorter edit generally replaced these shots with odd freeze-frames. 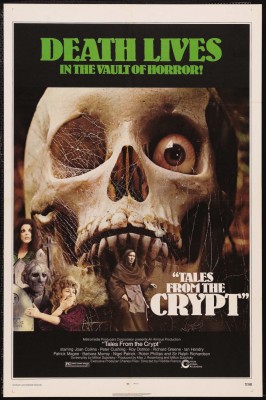 In Tales from the Crypt, five strangers (Joan Collins, Ian Hendry, Robin Phillips, Richard Greene, and Nigel Patrick) tour old catacombs, each a bit unsure exactly how they arrived and why they're there. A mysterious Crypt Keeper (Ralph Richardson) questions each visitor, triggering memories that unfold something like flashbacks.

In the first and best segment, "And All Through the House," Joanne Clayton (Collins) brutally murders her husband on Christmas Eve while, upstairs, their young daughter (Chloe Franks), unaware of her mother's crime, anxiously awaits the arrival of Santa Claus. As Joanne cleans up the blood and moves the body around (to make it appear that he died accidentally), a radio in the living room alternates between warm Christmastime music and reports of a homicidal maniac loose in the neighborhood - dressed as Santa Claus.*

In "Reflection of Death," businessman Carl Maitland (Hendry) leaves his wife and children for his mistress, Susan (Angela Grant). However, en route to their love nest they are involved in a horrific car accident, and a dazed and bewildered Maitland struggles to make it back home.

A modern take on The Monkey's Paw, "Wish You Were Here" finds financially strapped Ralph Jason (Greene) in possession of a Chinese figurine with the power to grant three wishes. His well-meaning wife, Enid (Barbara Murray), wishes for a fortune, which indeed comes true: Her husband dies on the highway and thus she'll inherit his insurance money. But it gets worse. Much worse.

The final segment is "Blind Alleys," with Patrick starring as the martinet director of a home for the blind. He drastically cuts their heat and food budget to pay for the expensive paintings and rich food and wine to which he treats himself and his constant companion, a Belgian Malinois named Shane. When one of the blind men dies from the director's ill treatment, the aging blind men, led by George Carter (Patrick Magee) plot their ingenious revenge.

Virtually everything about Tales from the Crypt works. The segments are compact but never feel rushed. Three of the five tales are actually adaptations from other EC comic books, The Haunt of Fear and The Vault of Horror, though this hardly matters. They effectively capture the spirit of those wondrously ghoulish and clever magazines, while maintaining the look of a slick (if modestly budgeted) contemporary British film. Indeed, the art direction is part of the fun: e.g., Joan Collins's austere, modern home somehow enhances the gruesomeness of the events happening there.

That segment and the last one are well chosen; each offers an ingenious little story imaginatively directed by cinematographer-turned-director Freddie Francis. "Reflection of Death" always seemed rather perfunctory in earlier home video releases, but comes off much, much better on Blu-ray. Possibly this is because the high-def transfer helps pull off the segment's night-for-night cinematography so much better.

The only problematic story is "Poetic Justice," mainly because the focus is on the victim rather than the perpetrator, undoubtedly the result of Cushing opting against playing the part ultimately essayed by Richard Greene in favor of Grimsdyke and, probably, the subsequent beefing-up of his part. (One can easily see Grimsdyke geared for another, less famous actor like Michael Ripper or Peter Madden.) Like Grimsdyke, Cushing was a widower at this time; both desperately miss their wife, both named Helen. As Cushing was, even then, such a beloved actor, and a famously kind and generous man like Grimsdyke, watching that character suffer so terribly is difficult to endure; even Grimsdyke's revenge offers little solace and seems so out of character, whether Grimsdyke and the actor playing him. 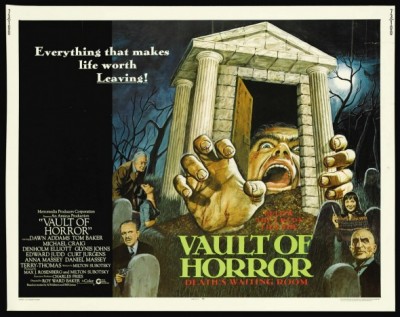 Inexplicably, The Vault of Horror is almost a complete bust, with none of its five segments as good as the weakest ones found in Tales from the Crypt. For one thing, the stories (ironically, none actually adapted from The Vault of Horror comic book; all but one are derived from Tales from the Crypt) aren't as carefully chosen. Some are beyond the limitations of the budget, others are miscast, and three of the five have grimly humorous aspects that don't work at all. Earlier in his career, director Roy Ward Baker generally made better movies than those helmed by Freddie Francis, but by the 1970s Baker often seemed to be on autopilot. Vault of Horror is directed with little enthusiasm and less flair.

Another problem is that where in Tales from the Crypt the protagonists were all well-to-do greedy and/or selfish individuals whose criminal or morally objectionable actions prove their undoing (even Richard Greene's character is identified as a ruthless industrialist, even though the audience sees none of that behavior), in Vault of Horror the circumstances are a bit different. In "The Neat Job," for instance, Terry-Thomas plays an obsessive-compulsive neat freak that drives his doting wife (Glynis Johns) to murder and insanity. The entire segment is conceptually misguided. Johns is a sweet, immensely likeable actress while Terry-Thomas, the emblematic British cad, is hard to dislike even at his most roguish. Yet here he plays a man with clinical mental illness. It's no fun at all to watch him browbeat his well-meaning wife into panic attacks.

In "Drawn and Quartered," Tom Baker plays a struggling artist in Haiti who learns that three men (one played by Denholm Elliott) back in Britain have cheated him out of a fortune, so he exacts his revenge using voodoo. While the second-best segment overall, Baker's madness and sadism don't engender much sympathy, quite unlike Patrick Magee and the other blind men's justice-serving revenge on Nigel Patrick in "Blind Alleys."

Given the limited budget, the filmmakers probably shouldn't have attempted the Haitian setting of "Drawn and Quartered" or the Indian one and special effects demands found in "This Trick'll Kill You," though that segment comes closest to capturing the essence of Tales from the Crypt. Curd Jürgens and Dawn Addams play married magicians in India looking for ways to spice up their act. They discover a girl (Jasmina Hilton) performing an uncannily real Indian rope trick. They unsuccessfully try to "buy" the trick that she insists is real magic. Determined to learn its secret they plot to murder her.

The other segments are even weaker. "Midnight Mess" has the novelty of casting real-life siblings Daniel and Anna Massey as brother and sister but the plot, with the brother tracking down an estranged sister to murder her for her inheritance, only to find her neighborhood overrun with vampires, is badly done in every respect save for one startlingly good on-set special effects done with mirrors. "Bargain in Death" is a supremely muddled insurance scam story, with Michael Craig buried alive only to have his partner-in-crime (Edward Judd, wasted in a one-line performance) skip town and his body "rescued" by medical students-turned-grave robbers Tom (Robin Nedwell) and Jerry (Geoffrey Davies). The joke, completely lost on non-British audiences, is that Nedwell and Davies previously starred as med students on the popular (but long-cancelled) British sitcom Doctor in the House and thus reprise their roles in all but name.

Tales from the Crypt and Vault of Horror are presented in 1080p widescreen, approximating their original theatrical aspect ratios. The video transfer on each is exceptionally good, as are the DTS-HD Master Audio mono (English only, with optional English subtitles). The added clarity and strong color noticeably enhance the effectiveness of Tales particularly. Further, where the earlier DVD of Vault of Horror utilized only the severely cut American release version, Shout! Factory's release includes the gorier, uncut version in both 1.85:1 widescreen and 1.33:1 open-matte (though I can't imagine why anyone would want to watch it that way), the latter on a second Blu-ray that also contains the 1.85:1 widescreen American theatrical cut. (All three are high-def). The cut scenes apparently were obtained by Shout! with help from the BFI.

Additionally, Vault of Horror includes alternate opening titles, when the film was briefly issued under the title Tales from the Crypt II, as well as a 4:3 black and white trailer. Oddly, no extras at all for Tales from the Crypt, the far superior of the two films.

Disappointing as even the uncut Vault of Horror is, its release on Blu is nonetheless most welcome, while Tales from the Crypt is a huge treat in high-def. Highly Recommended.

* When I was in high school, we booked a 16mm print of Tales from the Crypt for Halloween, where we dressed up a student in a Santa Claus suit. He jumped out of the auditorium's orchestra pit at the appropriate moment, sending the first several rows of students fleeing up the aisles.