Married to the Mob

Kino // R // October 14, 2014
List Price: $29.95 [Buy now and save at Amazon]
Review by Tyler Foster | posted October 21, 2014 | E-mail the Author
Note: Although screencaps should only be considered an idea of what the disc looks like, click any capture in this review to expand the image to a full size .png. 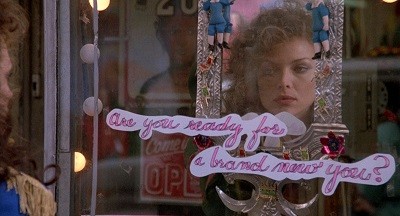 In every gangster movie, there's always the gangster's moll, presented in contemporary movies as a sexy and mysterious figure outside of their world, generally someone the gangster meets at a crowded nightclub. As the films continue, the girl and the gangster get married, but it's an unhappy union, with the bride either fed up with her husband's infidelity, his criminal lifestyle (and the constant threat of death), or his emotionally or physically abusive nature. There may or may not be a drug addiction for good measure. Married to the Mob, a charming 1988 comedy directed by Jonathan Demme and written by Barry Strugatz and Mark R. Burns, offers two crucial twists on these familiar beats: the film begins where others tend to end (during the "unhappily ever after" phase), and the story is told from the perspective of the wife instead of the gangster.

Michelle Pfeiffer stars as Angela de Marco, whose husband "Cucumber" Frank de Marco (Alec Baldwin) works for notorious crime boss Tony "The Tiger" Russo (Dean Stockwell). Despite all the microwave ovens, gaudy gold furniture, and trips to the hair salon she could dream of, Angela knows that Frank doesn't love her, and she's uncomfortable raising her son Joey (Anthony J. Nici) in a household where he learns things like how to con fellow classmates in three card monte and where Frank hides his revolver. She asks for a divorce, but Frank refuses, and that seems like that until Tony secretly whacks Frank when he finds out they're both having an affair with the same waitress. It's both a blessing and a curse: Angela jumps at her second chance, packing up Joey, donating the house and all of its contents, and moving to the city, but with Frank out of the picture, Tony begins putting the moves on her, which neither Angela or Tony's wife Connie (Mercedes Ruehl) are pleased about. She also unwittingly catches the eye of young FBI agent Mark Downey (Matthew Modine), and in more ways that one.

In addition to playing on gangster movie tropes, Married to the Mob feels like a twist on Demme's previous picture, Something Wild. Both movies concern an old romantic relationship with a criminal interrupting a new romantic relationship with an innocent square, but Wild's focus was on Jeff Daniels' repressed accountant coming out of his shell. At times, Mob can feel like an alternate reality version of Wild, right down to the common crew, including David Byrne as composer (not to mention there's a bit of a resemblance between Dean Stockwell and Ray Liotta). 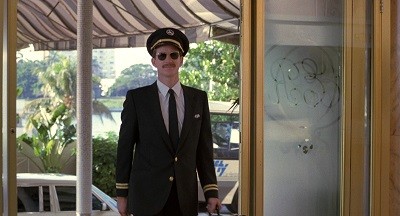 Mob's logline suggests a sillier movie with cartoon characters, a farce about a pampered woman trying to adjust to everyday life while goofy gunfire erups around her, and the effect of reducing those other mob wives to supporting characters is that their marital complaints are only seen through the dismissive eyes of the male protagonists. Demme deftly kills two birds with one stone by treating Angela like a real person, emphasizing the normalcy of her sadness and frustration, and presenting her triumphs with a sincere warmth.

Pfeiffer, perhaps drawing on memories of her character from De Palma's Scarface, is wonderful. It seems like the character of Angela would read as more of a brassy, aggressive type, but Pfeiffer taps into Angela's nervousness, whether she's meeting a handsome stranger in a cramped elevator with a chair stuffed between them, asking the same stranger out on a date, diving into the job market, or contemplating the concern that her decision to get married to Frank was a life sentence, even when he's out of the picture. At the same time, she's not a sad sack or busy feeling sorry for herself; she's excited at the opportunity to become a new and different person, and the way her eyes light up as she grabs each new opportunity is utterly winning. The film's heart and soul are revealed a bit over halfway through, in an extended scene where she and Mark talk about second chances. Demme ends the moment with a note of such hope and satisfaction that the film could practically stop there.

Of course, while Tony is often busy with other things, eventually Angela will have to get rid of him once and for all, and the movie loses a measure (not a lot, but noticeable) of its charm to dramatic obligation. 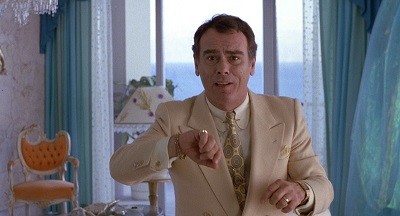 The routine nature of the film's final third is less irritating because it's pat and more because the rest of the movie is so good at allowing the characters to motivate the story instead of chance and coincidence. Angela decides to move, Angela asks Mark out. Mark believes Tony killed Frank, and it's Mark who theorizes that Angela was in on it. The flow is interrupted by Mark's superiors, who barge in with a number of threats that feel jarring compared to the film's light touch. Still, Demme remains in control of the ship, building to a fairly tense scene in the honeymoon suite of a swank hotel where Tony's itchy, bubbling paranoia (genuinely menacing in the hands of Stockwell) finally boils over. Demme executes shootouts (including one with Chris Isaak in clown makeup) with a certain ease, and an extended moment of recognition that's both witty and visually inventive. Blemishes and all, Married to the Mob is a gem of a romantic comedy, taking a larger-than-life situation and finding the honest human characters at the center.

The Blu-ray
Kino continues to follow a simple template for their MGM catalog buys: the original poster art, free of taglines and billing blocks, used as the front cover (in this case, a painted image of Pfeiffer, chained to Modine, Stockwell, Ruehl, and, for some reason, the fat guy from the beginning of the movie all bound inside an oversized wedding ring), and a standardized back cover with white text on black, and a couple of images placed at the top. The single-disc release comes in a standard Viva Elite case (non-eco), and there is no insert.

The Video and Audio
The quality of elements Kino has to work with on their MGM pick-ups has varied, but Married to the Mob makes a solid transition to high def. Presented in 1.85:1 1080p AVC, the image is not without consistent and noticeable issues. Print damage is the biggest one, with tiny black flecks frequently peppering the image. Color can also be inconsistent, especially in low light scenes where skin can appear pale or pallid. There's a softness to the picture that also stems from the scan's age, limiting the amount of textural detail in some shots. All that said, this is still a fairly nice looking transfer. Colors may vary but when they're on they appear natural, with nice vivid reds and greens. There is still a significant amount of detail and clarity to put this over MGM's 14-year-old DVD, and the texture, including film grain, have been left alone. Fans of the film hoping for an upgrade will probably be satisfied, if not overwhelmed. Sound is a DTS-HD Master Audio 2.0 track, mirroring the stereo soundtrack on the aforementioned DVD. It sounds very lively, lacking the inconsistency of the transfer, doing justice to the action sequences, and David Byrne's light score. 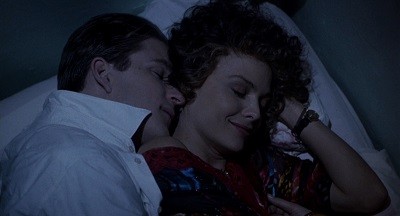 The Extras
The only extra is a terrible original theatrical trailer which pitches it as the movie it's not, full of exaggerated misunderstandings and lame mob gags. It's a shame that none of the extensive deleted scenes, which appear without audio during the film's credits, could be found and included on the disc (not to mention, Kino's produced some new commentaries and interviews for some of their Blu-rays).

Conclusion
I expected Married to the Mob to be a funny little farce, but Demme's action / romance is much more rewarding than that, with warmly realized characters and a surprising sweetness. The lack of extras is a bummer, but this Blu-ray, despite its flaws, is a solid upgrade. Highly recommended.