Paramount // Unrated // August 5, 2014
List Price: $59.99 [Buy now and save at Amazon]
Review by Stuart Galbraith IV | posted September 3, 2014 | E-mail the Author
Moving right along, CBS/Paramount's Perry Mason Movie Collection, Volume 3 arrives about three months on the heels of Volume 2, with Volume 4 scheduled for October. Having already released the original series' nine-season (1957-66), 271-episode run, these "Movie Collection" releases, available both as six-feature sets and sold as single, double-feature discs, encompass the later Perry Mason television movies, again starring Raymond Burr and Barbara Hale, that aired between 1985 and 1995. Thirty such films were made, though the last four are without Burr, the actor having died in 1993, shortly before his last one aired. (Paul Sorvino and, later, Hal Holbrook replaced him, playing different characters.) 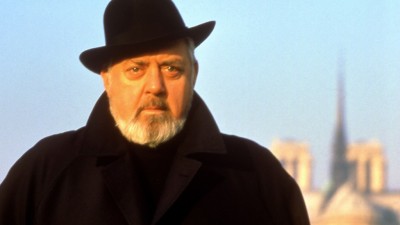 These TV movies are variable. The first one, Perry Mason Returns, sweetly reunited ace attorney Perry Mason (Raymond Burr) with his longtime personal assistant, Della White (Barbara Hale), but many of the later ones are perfunctory if well-made by the standards of the time. However, several in this set are above average and very worthwhile for fans of these characters. They scored high enough ratings that several warranted slots during NBC's (who first aired them) financially important rating "sweeps" periods in February and May, while filling holes in the network's schedule at other times.

It would be interesting to learn what the budgets were for these shows. To save money, most were shot not in "Hollywood" (i.e., Los Angeles) but in Denver, Colorado. They were filmed in 35mm but finished on tape, and I suspect one of the reasons William Katt (as Perry's private investigator, Paul Drake, Jr.) was replaced by William R. Moses (as detective Ken Malansky) may have been to save more dough there, too. Katt had recently starred in the moderately successful series The Greatest American Hero and the horror feature House (1986), which had been a big hit considering its small budget. Those factors may have driven up Katt's price.

Regardless, as before, these later Perry Mason TV movies are worth watching once, primarily for Burr rather than the mysteries he helps solve. Though he grew a beard and put on additional weight in the 20-plus years since the original series ended, otherwise Burr looks much as he did and his slips back into character effortlessly. (He does, however, walk with a cane, usually dresses in black and is photographed from angles chosen to obscure his girth.)

Though underemphasized, the relationship between Perry and loyal secretary Della are the highlights of each of these shows. In "The Case of the Defiant Daughter," for instance, Della converses with the personal assistant of a murdered man with whom she had worked, and shared an unstated loving relationship for decades. Della tells her she can certainly relate to this, having worked for Perry even longer. When the woman asks Della (I paraphrase), "Can you imagine losing a man you've worked for and loved all those years?" Della replies, "Oh, yes. I sure can." There's real emotion in Hale's voice. Could she have predicted that Burr would die (of liver cancer) less than three years later, I wonder?"

That episode also features several nice scenes with curmudgeonly Perry (with a bit of ol' Ironside seeping in) and his client, the teenage daughter (Jenny Lewis) of the accused. I don't recall the original series ever attempting something like this. And what might have been mawkish and maudlin instead comes off as genuinely sweet, thanks to Lewis's and especially Burr's fine acting.

And regardless of the budget cuts elsewhere, the ratings for these shows occasionally allowed somewhat bigger scale productions. Probably the best one in this set is "The Case of the Desperate Deception." That was actually filmed on location in Paris (Burr and Moses got to go, but Hale had to stay home). Moreover, its cast of British and expat Americans is way above average: Ian Bannen, Ian McShane, Paul Freeman, Mickey Knox, and Kim Thomson (doing an American accent) joining Yvette Mimieux, Teresa Wright, and Terry O'Quinn.

Perry Mason Movie Collection, Volume 3 sounds great but looks pretty terrible, especially compared with the crisp black-and-white transfers of the original series. Likewise shot on 35mm film but finished on tape, these 4:3 shows look soft and smeary, visually at odds with their lively and imaginative use of early television stereo sound, presented here in Dolby Digital format, and which holds up very well today. Optional English SDH are included and the discs are region 1 encoded.

The packaging is oddly a throwback of its own, presumably to allow for easy, later rerelease as three double feature DVDs. Here, three separate DVD cases each contains but a single disc with two each of these 95-minute shows. No Extra Features.

For hardcore Perry Mason fans only, but for them this set brings the "saga" one step closer to completion and I, for one, am glad to see these sets released at all. For them it's Recommended.