When I talked about Season Four of The Good Wife, I mentioned that it was of a good quality and, compared to the other material it was airing against on Sunday night television cable or otherwise, there was bound to be a slight or two towards it. But boy howdy, I never expected what unfolded over the course of a twenty-two episode run and manage to sustain its essence so well, but it does just that.

Season Four found us at the end with our main character Alicia (Julianna Margulies, ER) telling Cary (Matt Chuchry, Gilmore Girls) that she wanted to start her own law firm with him. We see her go through the mechanisms of that, along with trying cases and raising a family. Oh yeah, she is now the First Lady of Illinois, married to Peter (Chris Noth, Sex and the City). Alicia's aspirations for legal independence lead to a slow burn of increased tension between her and Diane (Christine Baranski, The Bounty Hunter), one of the partners of the firm. The other partner is Will (Josh Charles, Sports Night), younger and a former lover of Alicia's. The tension explodes in "Hitting The Fan," the fifth episode of the season, as flawlessly run an episode from start to end that one could experience. Great performances, a chance to explain mythology of some stories and explore others in a reboot of sorts. It is quite easily one of the best episodes of television in 2013. 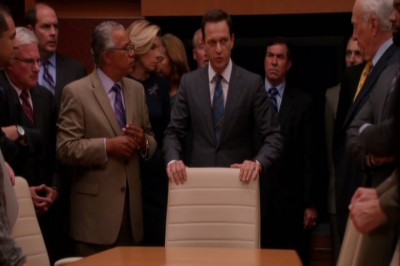 It is how nicely done the episodes are which run up to it that is a lesser spoken moment yet one of the ones which make The Good Wife mesmerizing viewing in Season Five. The first episode, "Everything is Ending," starts the wheels in motion, and also is an emotional journey where Will, Diane and Alicia fight to save a prisoner, played by Malik Yoba. The show touches on NSA wiretaps in the next episode with another guest appearance by Zach Woods (The Heat). Though the show makes the NSA angle a recurring subplot in the season, that episode in particular underscores that the how hits the comic notes just as well as the dramatic notes, as shown by the show's propensity to toss in an odd yet recurring clip of goats yelling. A comic moment in "Hitting The Fan" could not be any more perfectly placed. The show is comfortable in its own skin to say the least.

Chief among those doing so is Margulies. Fresh off a richly deserved Emmy win for her work during the year, Alicia's character develops a new facet of herself over the course of the season that is fascinating to watch. She goes from aspiring, to calculate, to combative, to shattered, to being a Mom over the course of the season. There is a moment late in the Season when Peter's campaign manager Eli (Alan Cumming, X2) visits Alicia, but has a difficult question to ask. She pours wine for herself, offers Eli some, and he declines. She executes the perfect beat before resuming, a subtle note of support to a friend and colleague, both of whom having a mutual interest in Peter's success. It was like watching Michael Jordan play the Portland Trail Blazers in the NBA Finals, and after a three-pointer, he just shrugged his shoulders. That's how good Juliana Margulies was in Season Five of The Good Wife.

For that matter, so was damn near everyone else. Whether it was returning guest stars like Carrie Preston, Michael J. Fox or Dylan Baker, or new guest stars like Jeffrey Tambor, everyone was on point. Tambor played a judge, and he devoured the dialogue and played the role to note perfection, seemingly bookending his recurring role in the same occupation in Hill Street Blues decades earlier, with a dusting of Jay Porter from And Justice For All. Stockard Channing and Mary Beth Peil play Alicia and Peter's parents and they also bring the noise ("I have a Hanukkah") like the pros they are.

There are a couple of creaks to the Season. I mean, the recurring appearance of Finn Polmar (Matthew Goode, Watchmen) after something I'll just call "The Event" seems to be some sort of admission that the show creators really did not have much of a plan for him after "The Event." And the character of Kalinda (Archie Panjabi), Lockhart-Gardner's investigator, continues to be squandered in moments where there is lack of a direction for her. 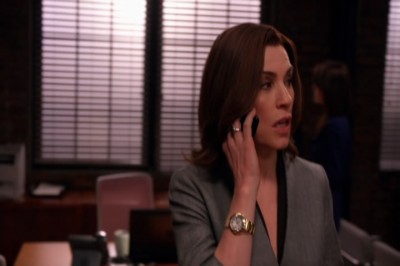 The fine folks involved with The Good Wife both in front of and behind the camera have discussed producing the television they have for twenty-two episodes, not the twelve or thirteen that a Breaking Bad, Boardwalk Empire or Masters of Sex would have. I think perhaps there may have been a smugness that accompanied such a statement to boot. But the fact of the matter is The Good Wife did, over the course of a longer span on the calendar, provide three tent pole moments within a traditional order of television when most shows struggle to get one right. That is partly kismet, but mostly due to the work of the ensemble, who excelled beyond my expectations.


Like previous seasons, this set finds The Good Wife presented in 1.78:1 anamorphic widescreen, and things look fine. I remember seeing most of the episodes when they aired in high definition and the standard def discs have good image detail and color reproduction throughout. Black levels are deep, constant and inky and the source material is as clean as can be. The discs look almost as good as the high definition broadcasts did and are good viewing material.


Dolby Digital 5.1 surround for all episodes, and in the dialogue-driven drama, dialogue sounds great. The show demonstrates its musical ability every so often, including an episode which was touted as a sneak preview of sorts at the next album from Bruce Springsteen. Subwoofer involvement is sparse but smartly used, as are the directional effects and channel panning, and overall sounds as good as it did on television.


If there is a fault for these DVDs, it is the lack of decent bonus material. To the credit of the show or to CBS, Charles de Lauzirika was brought in and shot a three-piece, almost hour-long look at episode 515, the episode where, well, "The Event" happened. The first part is "A Bad Feeling" (18:34), where the circumstances surrounding "The Event" were recalled, and the cast and crew discuss their emotional and professional effect from there. Script reads are shown, along with a script to screen comparison of various scenes. "In the Thick of It" (17:38) covers the production, shot breakdown, and the cast discuss their thoughts on the show after "The Event." "Everything Ends" (17:36) looks at the post-production, editing and where King shows us how meticulous he is. They discuss semi-jokingly the stuff they shot was going to be on the DVD but it's missing. That gripe aside, the piece is good and I hope de Lauzirika can talk the Kings and Margulies into future and increased bonus material.

Deleted scenes accompany 17 of the show's 22 episodes, and altogether are a lot of time (38, 39:27) but do not get into too much of note. Disc One has "New Season, New Alicia" (3:17), where Margulies discusses her character, and Disc Three includes the music video for the "Thicky Trick" song (3:22), which you WILL get in your head. Disc Six has a gag reel (3:44) which has a couple of laughs but it too quick.


Where most television shows after several years manage to inspire you to watch previous seasons to catch up on the mythology, The Good Wife sneakily gives you the choice over the course of Season Five to watch the previous seasons (you will) or pick up Season Five and start fresh because its main character undergoes such a reboot in it. For episodic dramatic television, you almost never see it in network television, and those doing the work are seasoned pros who pull it off without batting an eye. The Good Wife expects nay, demands your attention, and is the best dramatic show on network television for my money, and there is no substitute.