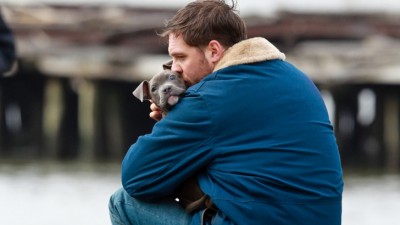 The Drop was written by Dennis Lehane, first as a short story and then as a screenplay. The fact that it was not first crafted as a novel is an important distinction, since Lehane's other successes were. Mystic River, Gone Baby Gone, Shutter Island; all Lehane books turned into movies, but with someone else doing the adapting. The stories speak for themselves and are always dark, twisted, gritty, sad, realistic, personal, and strong. But perhaps Lehane' talent doesn't lay is screenwriting. Mystic River, for example, is an exponentially better film than The Drop. The former capitalizes on great acting & a solid plot to become an excellent film. The latter doesn't lack in quality actors or a captivating story, but it fails to become anything more than an entertaining crime movie, something that all of Lehane's other projects somehow rise above.

This is the story of a man, his dog, his job, his boss, his girl, and the neighborhood that twists it all into something grotesque. Bob is a simple guy. He works at a bar for his cousin Marv, he never forgets who drinks what, he lives alone at the family homestead, and he walks the streets of New York at night with no fear. Bob & Marv are connected, controlled by a group of criminals who use their bar as a drop site for dirty money, a random collection point for the cash that runs the city's underworld. But when the bar is robbed, the duo find themselves desperate to return the money before the mob loses its patience. And when Bob finds an abandoned dog, an event that leads him to meet the beautiful Nadia, things start to mesh together in a confusing way for the guy who just wants to tend bar.

The problem with The Drop is that it's a little too normal. The greasy criminals, the guys from the 'hood, the nosy cop, the church mass, the accents, the bar; it's just all a bit typical. Lehane wrote strong characters into his story, but he failed to make the plot original. I guess I can't be too hard on the guy, this is his first attempt at a screenplay, but perhaps he should have left that job for someone else. The movie took on a watered down feel, with some terror that wasn't all that terrible, darkness that wasn't quite dark enough. I can't help but compare it to Mystic River, and even Gone Baby Gone, which were both more impressively oppressive and left audiences feeling much more drained. This film was a little more surface, had much less depth, and didn't force me to think about it after I left the theatre.

Now, none of that blame should fall on the lead actors, because they brought their best stuff. Tom Hardy was perfect as Bob, the simple barman who might just have a little more simmering beneath the surface than you'd first expect. Even his voice was spot on, a tone that added to his character and helped make him a likeable lawbreaker. James Gandolfini, in the last film before his death, was also solid as Cousin Marv, the sad thug who used to own the bar outright until the mob moved in. His character was a little static, written to be a bit flat, but he did what he could. Noomi Rapace was just OK as Nadia, never really making us understand why Bob liked her so much, never drawing us in to the sob story that defined her role. So while everyone involved did a fine job, no one could really escape the average screenplay or the passable direction. The film dropped a few surprises, a couple twists, but even those felt manufactured rather than original, leading to a movie that is watchable for sure, especially for Hardy's character, but itsnothing special. 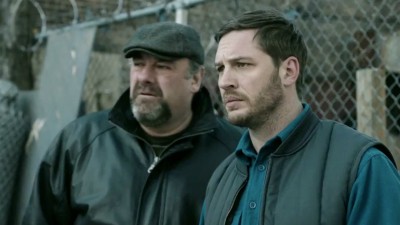