Universal // Unrated // September 2, 2014
List Price: $44.98 [Buy now and save at Amazon]
Review by Stuart Galbraith IV | posted September 16, 2014 | E-mail the Author
I had a few major issues with the first season of Chicago Fire (2012-present), the ensemble, character-driven television drama about firefighters and paramedics working in the Windy City, the creation of editor-turned-writer/producer Michael Brandt and writer Derek Haas, and produced by Dick Wolf's (Law & Order) company. Mostly it made for compelling, even addictive viewing. It is generally intelligent and extremely realistic in most respects, and lavishly produced on the scale of a big-budget theatrical feature.

On the down side the first season was seriously marred by an apparently ratings-driven compulsion to populate its cast with male and female runway model types (talented though the actors are) and to work in at least one steamy sex scene in every episode. Additionally, while most aspects of firehouse life and in particular the constant budgetary/low-pay issues facing most fire departments today are realistically addressed, in some instances the firefighters' personal lives were dramatized in absurdly glamorous terms. One example: two roommates on the show shared an impossibly expensive ultra-hip apartment that, realistically, their combined salaries could never possibly cover.

Having proved itself ratings-rise, even prompting an intricately integrated spin-off, Chicago Fire: Season Two measurably dials back these faults, and the series is better than before.

Universal's DVD set includes all 22 season two episodes, along with good extra features. The transfers are up to contemporary standards, showing off this handsomely-produced show well. 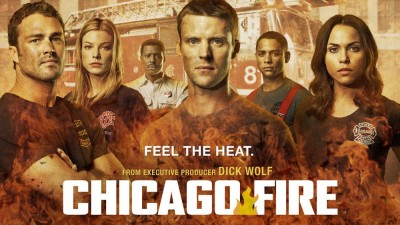 The series resembles forerunners like Emergency! in that Chicago Fire typically centers around two big set-pieces, often one major fire and one smaller scale but equally harrowing rescue operation, emergencies presenting unusual and/or dangerous accident scenes: a car dangling precariously 10 floors from the ledge of a parking structure, a suicidal diabetic, etc. And, like most television drama these days, there's usually a darker "A" story complementing a slightly lighter "B" story. Some plots are self-contained within a single episode; others are arced over many episodes or even the entire season. Because the show's characters have been so well established over the course of Season One, this is less obvious in Season Two, as more character drama, arced over many episodes, is so well integrated.

There are six major characters and myriad supporting and recurring ones. Lt. Matthew Casey (Jesse Spencer) is the no-nonsense leader of Truck 71. Early in this season he's burdened with having to care for the two boys of a firefighter killed at the start of Season One, whose widow winds up in prison on a drunken driving/manslaughter charge. Casey shares about equal screentime with Lt. Kelly Severide (Taylor Kinney), of Rescue Squad 3. Ladies' man Severide spends the early part of Season Two investigating a serial arsonist who may be a disgruntled former firefighter, and some episodes on reconnects with a half-sister later kidnapped. (This story crosses over to Chicago Fire's spin-off, Chicago P.D..) Severide's lesbian roommate, Paramedic Leslie Elizabeth Shay (Lauren German), struggles with guilt over a patient's horrific suicide in her presence, causing a rift between her and partner Paramedic in Charge, Gabbie Dawson (Monica Raymund). Gabbie's fickle love life turns its attentions back to Casey for much of this season.

Eager-to-please Firefighter Candidate Peter Mills (Charlie Barnett), the son of a respected, fallen firefighter, grapples with failing to win a promotion (at the end of Season One) and the destruction of his mother's diner at the hands of that serial arsonist. And, finally, 25th Battalion Chief Wallace Boden (Eamonn Walker) is at odds with duplicitous financial consultant Gail McLeod (Michelle Forbes), who plots with Severide's retired firefighter father (Treat Williams) to unseat him.

As before, Chicago Fire is pretty standard hour-television drama fodder but it's quite compelling nonetheless, especially during the frighteningly realistic fire and rescue set pieces, which make forerunners like Emergency! seem quaint by comparison. Even the biggest rating-sweeps episodes of ER only equal the average Chicago Fire in terms of production values.

A series like Chicago Fire must be fiendishly expensive, undoubtedly several million dollars per episode. It's produced on the scale of a theatrical feature, and many of the spectacular fires and accidents appear only intermittently assisted by CGI graphics. Most of these set pieces seem to be done full-scale, with on-set special effects.

It's also worth noting that some of Chicago Fire's most interesting and believable characters are older personnel like Lt. Christopher Herrmann (David Eigenberg), a veteran firefighter and family man struggling with a second job, a bar he opens in partnership with Gabbie and firefighter Otis (Yuri Sardarov), a sci-fi geek who moves in with Severide and Shay. Particularly good is Christian Stolte as firefighter Randy "Mouch" McHolland, another veteran running for union president in Season Two.

Twenty-two 42- to 43-minute episodes are spread across five single-sided, dual-layered discs. The 1.78:1 enhanced widescreen shows look quite good, up to contemporary television/video standards, and the Dolby Digital 5.1 audio is, expectedly, quite lively and full of oomph. Optional English SDH subs are available, and the discs are region 1 encoded.

One complaint: Formerly, it was easy to skip past all the FBI warnings and other unwanted pre-show disclaimers and ads stuck on Universal DVDs like these, but now their discs are preceded by several such items that cannot be skipped, yet which precede the viewing of every single disc. I've never understood the point of such things; such warnings don't apply to the 99.999% of people who watch these shows, and aren't about to dissuade the .001% to whom such warnings are directed.

Supplements include behind-the-scenes featurettes individually covering 16 of the 22 episodes. Also included is "I Am a Firefighter," a digital mini-series and "Stepping Stone," the pilot episode of Chicago P.D. Significantly, a Chicago P.D. crossover episode, "8:30 PM," is included, allowing viewers to see the concluding half of that two-part story.

Not great but better than Season One and overall very satisfying, Chicago Fire is Recommended.