Universal // Unrated // September 2, 2014
List Price: $44.98 [Buy now and save at Amazon]
Review by Stuart Galbraith IV | posted September 18, 2014 | E-mail the Author
In the fifth episode of Chicago P.D. (2014-present), a comparative rookie detective asks one of his more experienced, unimpeachable brother officers about their leader, Hank Voight (Jason Beghe), head of the Chicago P.D.'s Intelligence Unit. "Should I be learning from this guy or should I keep my distance?" he asks. The more experienced officer responds, "Both."

The moral ambiguity of Sgt. Voight is one of the main attributes of Chicago P.D., a fairly strong drama spun-off from another Wolf Films/Universal/NBC series, Chicago Fire. The new series has almost all the same qualities as the series that inspired it and few of its failings; there are a lot of crossover characters from that earlier series, and its structure is similar. On Chicago P.D., there is a bit more emphasis on story, suspense, and action compared to Chicago Fire, which tends, especially in its second season, to be a bit more character-driven, though both programs are well above average.

Universal's DVD set includes all 15 Season One episodes, along with a Chicago Fire crossover episode and a second episode from that series, providing some backstory to unacquainted viewers. It does not, however, include the Law & Order: Special Victims Unit episode "Comic Perversion," the first part of another crossover story that begins there and wraps up with the Chicago P.D. episode "Conventions." I wonder why, as both shows emanate from the same production companies and air on the same network? The transfers are up to contemporary standards, showing off this handsomely produced show well. 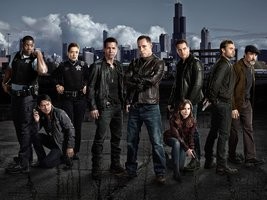 Though not necessary, it helps a lot if the viewer is able to synch-up Chicago P.D. with corresponding airdates on Chicago Fire. At least a third of P.D.'s characters were introduced in first- and second season episodes of Chicago Fire, and beyond the literal crossover shows many episodes refer to events occurring simultaneously on Chicago P.D.'s mother series.

The program revolves around a tight-knit Intelligence Unit of Chicago's police department. Sgt. Hank Voight (Beghe) is its morally ambiguous leader. In the first season of Chicago Fire the character threatened firefighters after he attempted to get his adult son off a vehicular manslaughter charge, and at that time Voight was portrayed as an unpardonably dirty cop accepting bribes from local gangs. On Chicago P.D., there's some hint that Voight is actually working on behalf of a highly secretive Internal Affairs sting headed by Erica Gradishar (Robin Weigert), though it's also readily apparent that he constantly violates regulations and protocol, operating the unit as his own answerable-to-no-one fiefdom.

Also in the unit is Det. Antonio Dawson (Jon Seda), the brother of paramedic Gabbie Dawson on Chicago Fire and who, during that series' previous season, actually helped send Voight to prison before Gradishar sprung and reassigned him here. Det. Erin Lindsay (Sophia Bush) has her own mysterious past and complex relationship with Voight, who helped turn her life around when she was a drug-addicted, out-of-control teenager. For her Voight is a father figure and she's now one of his most-trusted colleagues. Det. Jay Halstead (Jesse Lee Soffer), another character introduced on Chicago Fire, is a hotheaded young detective haunted by the rape and murder of a sibling, a crime that went unpunished.

Officer Adam Ruzek (Patrick John Fluegar) is a police cadet recruited by veteran undercover specialist Det. Alvin Olinsky (Elias Koteas). He proves more than up to the task in most respects, but too often goes with his gut rather than follow procedure and even direct orders from his superiors, causing concerns that he may get himself or others killed. Olinsky, an older detective, is also grappling with troubles at home, so bad that he's living out of the family garage.

As with Chicago Fire, Chicago P.D.'s production values are extremely impressive, the show resembling a polished contemporary film more than Dragnet or even NYPD Blue. It's frequently tense and exciting, and the character interaction is always interesting.

Beghe, who looks like a college football coach with the presence (and gravelly voice) of Lawrence Tierney, is an imposing presence. His character frequently reminded this reviewer of one of Akira Kurosawa's masterpieces, The Bad Sleep Well (1960). That film's story suggested that it was possible for someone to be a fundamentally bad man and yet at the same time a devoted, caring parent and husband. On Chicago P.D. the implication is that Voight is a dirty cop encapsulating much of what's wrong with America's police today but also a man fiercely loyal and protective toward his colleagues, one whose ultimate goal to protect and serve his community aren't dissimilar to those of his superiors.

The slick but morally reprehensible 24, with that show's counter-terrorist hero, Jack Bauer (Keifer Sutherland), argued that the ends always justified the means (including torture), but Chicago P.D. offers viewers much more ambiguity. When Voight crosses way over the line, threatening to murder suspects in order to extract ticking-bomb-type intelligence, the reactions of the other officers are varied, and the series, at least the half-season this reviewer got to see before writing this review, like the various Law & Order shows, largely leaves it up to the viewer to draw his own conclusions.

And, like Chicago Fire, the ensemble cast is good-to-excellent across the board, with Beghe, Seda, and especially Koteas standing out. Conversely, P.D. avoids some of the ratings pandering of Chicago Fire's first season. In short, this is a good show.

Fifteen 42- to 43-minute episodes are spread across four single-sided, dual-layered discs. The 1.78:1 enhanced widescreen shows look quite good, up to contemporary television/video standards, and the Dolby Digital 5.1 audio is, expectedly, quite lively and full of oomph. Optional English SDH subs are available, and the discs are region 1 encoded.

One complaint: Formerly, it was easy to skip past all the FBI warnings and other unwanted pre-show disclaimers and ads stuck on Universal DVDs like these, but now their discs are preceded by several such items that cannot be skipped. I've never understood the point of such things; such warnings don't apply to the 99.999% of people who watch these shows, and aren't about to dissuade the .001% to whom such warnings are directed.