The Conformist came out in 1970, immediately cementing Italian filmmaker Bernardo Bertolucci as one of cinema's most visionary figures. Complex, violent, and utterly gorgeous, it stands as one of the best European films from the fertile '70s - and that's saying a lot. A new, restored Blu Ray release from Raro Video is a cause for celebration, even if the picture quality on this film known for its fantastic cinematography (by the great Vittorio Storaro) seems a bit lacking.

I first saw bits of The Conformist on the big screen in 1992, when it was included in the documentary on great film photography Visions of Light. The clips they included were seductive, glossy images fit for display in a upscale art gallery: a woman dancing in a striped dress that matches the venetian blind-slatted sunlight in the room, a dolly shot of people exiting a car dominated by blowing dried leaves, and an imposing, austere interior with an absurd-looking extra carrying a giant human head. The excerpts made the film look like a superficial, austere, coffee table-book of a movie which fetishized '30s Fascist Italian style, but Bertolucci (along with several other talented hands) turned a strong story into a damning commentary on power and manipulation. Along with the fantastic photography and production design, Bertolucci's non-linear narrative structure made it a dynamic, forward-thinking political thriller.

For The Conformist, Bertolucci adapted a well-known 1951 novel by Alberto Moravia to tell the story of a weak-willed Fascist operative named Marcello, embodied in a marvelous, apprehensive performance by French actor Jean-Louis Trintignant. 1938: Marcello and his simpleminded young bride Giulia (Stefania Sandrelli) travel to Paris on their honeymoon, where Marcello receives instructions from his boss, Manganiello (Gastone Moschin), to assassinate his old mentor from college. The anti-Fascist professor Quadri (Enzo Tarascio) is now exiled in Paris with his beautiful wife, Anna (Dominique Sanda), a sensuous, idealistic woman with whom Marcello once had an affair. Marcello's plans are complicated when he rekindles the flame with Anna, while flashbacks reveal that a childhood trauma with the family chauffeur made him into a cold, complacent shell of a man with no empathy for others. Marcello's world view was once in line with the Communist-sympathizing Quadri and Anna, but he joined his blind brother, Italo (José Quaglio) in the Fascist movement simply because it was the easiest way to conform. Having the job of helping to kill his former mentor, and falling for Anna again, makes him more easily manipulated than ever before. In a coda set after the fall of Fascism and Mussollini, Marcello's ideals have predictably taken another shift - his rigid self-propriety has made him into a self-loathing, mentally unstable mess.

The Conformist is one of the great Italian films (probably in my top five), bolstered by Bertolucci's inventive, brutally honest approach to the source material, the stunning photography and production design (the latter by Fernando Scarfiotti, who later lent his sophisticated touch to American Gigolo and Brian De Palma's Scarface), and excellent performances by the entire cast. Trintignant in particular delivers a superb, economic performance that communicates Marcello's self-hatred with a few intense glances at the camera. One of the more accessible, not-as-indulgent films that signaled the beginning of a new, adventurous era in cinema, The Conformist retains its power as an interesting character study and a potent, beautifully shot thriller. 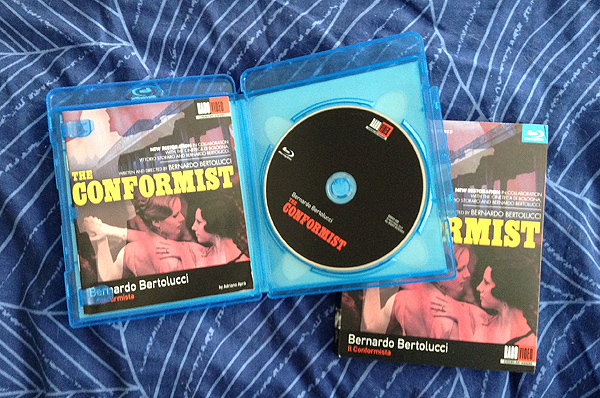 Raro Video's Blu Ray edition of The Conformist presents the film in a digitally restored edition overseen by Bertolucci, cinematographer Vittorio Stoarao and the Cineteca Di Bologna. The 1.66:1 image which looks good, although some of the source print's limitations seen in Paramount's 2006 DVD are still present here. The film still has some murkiness in the darker areas, yet the high-resolution brings out rich, subtly saturated colors and fine details not seen since 1970. There's also a few scenes where the image flutters. The print has been cleaned of residual dust and dirt for the most part, while the increased resolution highlights the warm graininess in the film stock.

The disc's PCM stereo audio is available with the original Italian soundtrack and the English-language dub spoken by some of the actors (most notably Trintignant, whose lines were overdubbed by a different actor on the Italian track). The overdubbed sound has its dynamic limitations, yet both are pleasantly mixed with good, clear dialogue and a fullness that brings out Georges Delerue's haunting score. A new, improved English subtitle track is also provided.

Bertolucci is on hand for In the Shade of The Conformist, a 57-minute visual essay that alternates a 2011 interview with the director with narrated portions discussing (with graphs!) the film's photography and shifting time frames. There's also two Theatrical Trailers - a beat-up one for Paramount's original U.S. release (which seems to emphasize the movie's violent scenes over the plot) and one for the 2014 theatrical re-release. The package also contains a nice 28-Page Booklet with comprehensive credits, an introduction by author Emiliano Morreale, contemporary film reviews, an excerpt from a 1971 interview with Bertolucci, and appreciations from the cast and crew.

Bernardo Bertolucci's The Conformist is a brutal, gorgeously filmed masterpiece which has held up remarkably well since 1970. Raro Video's comprehensive Blu Ray release is the best-yet U.S. home video edition of the film, although there's still some room for improvement where it comes to the justly famous camerawork. Recommended.