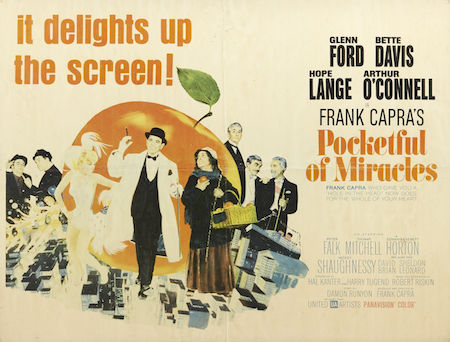 I have not seen Frank Capra's 1933 comedy Lady for a Day, so I cannot knowledgeably compare it to the director's own remake from 1961, Pocketful of Miracles. However, from looking online, I see that Lady for a Day runs a mere hour and a half, compared to this film's bloated two and a quarter hours. Based on that fact alone, I'm inclined to bet that the earlier film has a good shot at being the better version.

You see, there are lots of likable moments in Pocketful of Miracles, but the film is so elongated and rhythmically unbalanced, that those moments only come in fits and starts. The main plot of the film, that superstitious gangster Dave the Dude (Glenn Ford) decides to help street peddler Apple Annie (Bette Davis) pose as a well-to-do lady for the benefit of her visiting long-lost daughter (Ann-Margaret), doesn't even kick in until we're nearly a full hour in. Admittedly, the movie's last half-hour is remarkably swift and solid and shows off Capra at his crowdpleasing best, but unfortunately it's so remarkable just because so little of the film is like that.

While the off-kilter rhythm certainly doesn't help, miscasting is the film's greatest weakness. Glenn Ford, who snagged the lead role because his production company offered to help foot the bill, is all wrong for a Damon Runyon-style gangster part (a Runyon short story serves as the basis for the script). Though undoubtedly a movie star, Ford is too square. He lacks the streetwise attitude and comic timing to give the proper oomph to the character. Similarly, Hope Lange tries her best, but also often seems too conventional and out-of-place as Queenie, the Adelaide to Ford's would-be Nathan Detroit.

That leaves a bit of a vacuum in the leading roles, but thankfully the film is full of rich and colorful, perfectly cast supporting performances. Peter Falk steals the movie as Dave the Dude's beleaguered right hand man, Joy Boy: now that's a funny gangster! He's nicely complimented by Mickey Shaughnessy as Dave's other, not-so-bright right hand man, Junior. Edward Everett Horton does what he does best, as a romantic butler who gets a kick out of helping Dave and Annie with their plan. Thomas Mitchell is a hoot as an old con man corralled into posing as Annie's wealthy husband. Spike Jones's buddy Doodles Weaver and frequent western heavy Jack Elam can also be glimpsed in a few scenes.

Pocketful of Miracles became Capra's financially disappointing swan song, it has enough fun performances and good laughs to merit another look after all these years. That killer third act is so entertaining that it almost makes up for everything that came before it. Almost.

The Video:
Though Kino has ill-advisedly put this highly detailed, widescreen, two-hours-plus film on a skimpy BD-25, I actually thought the AVC-encoded 1080p 2.35:1 transfer looked pretty good overall. The image had a better-than-average film grain structure with minimal digital compression issues. I caught some minor color fluctuations, but mostly the colors were vibrant and rich, with no unusual-looking skintones or severe aberrations. Capra lets a lot of scenes play in long-take wide shots and the amount of detail in these shots is above average but not quite top-notch.

The Audio:
There are no significant problems with the DTS-HD MA 2.0 mono audio. Dialogue, music, and effects are all discernible and well-mixed. There is one subtitle option: English SDH.

Final Thoughts:
Pocketful of Miracles often nails its serious, sentimental moments more expertly than it executes its comedy. Unfortunately, the film is mostly supposed to be a comedy. Rent It.