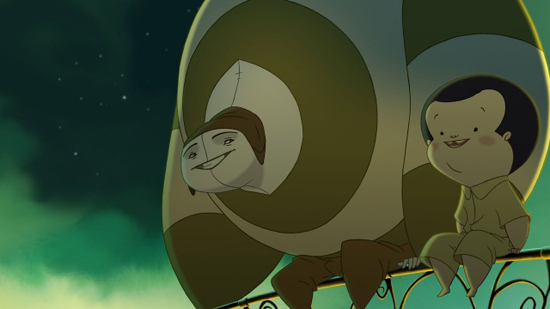 A child's fear of the dark uncovers a fantastic secret world in Nocturna, a 2007 animated feature from Spanish directors Adria Garcia and Victor Maldonado. Though spoken in English, the visually splendid Nocturna fits along the same lines as other challenging, non-stereotypical animated features coming out of Europe in the past decade. Seven years after its original screenings, Gkids has deemed the movie fit for an American release in theaters (on a limited basis) and on Blu Ray - but is it worth the wait? Well, if you don't mind blah characters and recycled stories, then the answer is sí.

At least it looks fantastic. The partly digitized, partly hand-drawn Nocturna benefits from having a curvy, organic aesthetic which calls to mind 2009's Oscar-nominated The Secret of Kells. Where Kells conjured up a color-saturated, stylized medieval kingdom, Nocturna delves into a vividly rendered, angular metropolis vaguely reminiscent of turn-of-the-century Paris. Like 2012's Ernest & Celestine, the story centers on a unique, headstrong young orphan who views the world differently from his peers. Our little protagonist, Tim, is a creative, introspective sort who gets bullied by the other orphans for his fear of the dark. His only solace is the stars - especially Adhara, the star he chose as his favorite. After discovering that Adhara has disappeared, Tim ventures out on the orphanage's rooftop and meets a bulbous, top-heavy humanoid creature who walks on all fours, herding a faithful fleet of cats whom he assigns to Tim and all the other kids in the city. As Tim learns, the Cat Shepherd is an inhabitant of Nocturna, a world with hundreds of odd creatures who spend every working night clocking into a factory which ensures that the city's children will sleep peacefully. Desperate to see Adhara back shining in her rightful place in the sky, Tim enlists the help of the Cat Shepherd and his #1 cat, Tobermory, to seek aid from Nocturna's guardian, Moka. The imperious Moka refuses to help, however, and so it's up to the Cat Shepherd and Tim to quickly find Adhara and return her to the heavens before the sun comes up.

In case it wasn't already obvious, Nocturna's plot bears a strong resemblance to Pixar's Monsters Inc. (although there are significant differences). Where Monsters Inc. depicted the monsters' existence as a fully-realized mirror image of the human world - so closely guarded that a child's intrusion is seen as a contamination - Nocturna's divisions between human and creature worlds are much more vague. Nocturna's creatures are defined by the specific tasks they do, including a trio of gossipy girl creatures who sculpt kids' hair into infinite varieties of bedhead and a pushy little guy who goes by the descriptive name of Mr. Pee. While cute, there isn't much room for character development. Even major figures like Tim and the Cat Shepherd, depicted as Tim's benevolent guide and little else, seem half-blooded and flat. Too many vague, unexplained things happen in this movie as well, such as why a kid like Tim who's deathly afraid of the dark would be so non-plussed about encountering the hulking, weird-looking Cat Shepherd. How much different this film would have been had the filmmakers lavished half the attention of story logistics as they did on the visuals and animation (which are great; I loved Tim's bead-eyed face and pudgy, non-cute physique, for example).

In terms of dazzling imagery, Nocturna sports the same high-quality imprimatur of other Gkids video releases such as the aforementioned The Secret of Kells, Ernest & Celestine, A Cat in Paris and Tales of the Night. Unlike those, however, Nocturna's underwhelming story and simplistic characters left me bored. Disney and Pixar-fatigued parents may want to seek this one out for something different - but only if they've already seen the other, more worthwhile Gkids offerings. 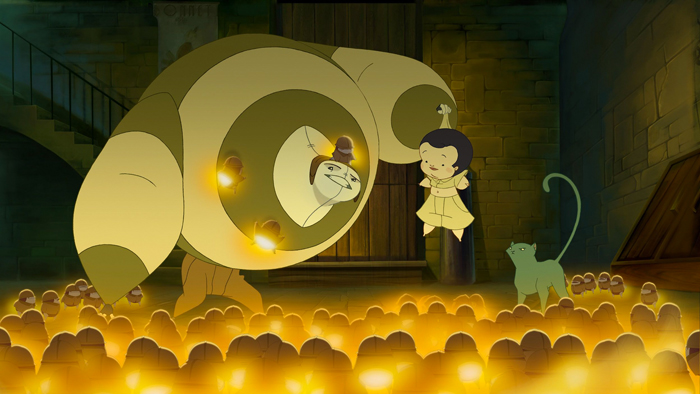 Cinedigm and Gkids' Blu Ray edition of Nocturna showcases the film's 2.35:1 image in a good, vibrant letterboxed transfer. Colors are gorgeously calibrated, while the nighttime settings have a robust quality without looking murky. There's just one issue I saw - even at 1080p high def, the animation's high-contrast linework sports pixelated edges. While not a deal-breaker, it did seem odd that an otherwise nice-looking transfer would have DVD-level image fidelity.

The English-language DTS Master Audio 5.1 soundtrack is offered in a pristine mix. Dialogue is mostly kept in the central channel, while Surround effects are occasionally used to indicate offscreen sounds. Nicolas Errera's lush musical scoring contributes a lot to this atmospheric track. No subtitles or alternate audio is offered (f.y.i., the film's Region 2 DVD release offers an additional Spanish-language soundtrack).

The overseas home video edition of Nocturna contained a few more extras (cast and crew interviews), although Gkids has retained a Making of Nocturna featurette (9:02), which interviews directors Adria Garcia and Victor Maldonado and shows behind-the-scenes footage of the production. The Art of Nocturna (5:53) is a montage of character designs, early background layouts, and model sheets. The film's Theatrical Trailer and previews for other Gkids releases rounds out the bonus content.

Fanciful Spanish-French animated feature Nocturna has gotten a lot of great notices from animation fans, although this one was unimpressed. While this tale of a young boy uncovering an amazing nocturnal world looks beautiful, an unmoving story and bland characters make it much more typical than it lets on. Young children would enjoy this effort, which (oddly enough) owes a huge debt to Pixar's Monsters, Inc. Rent It. 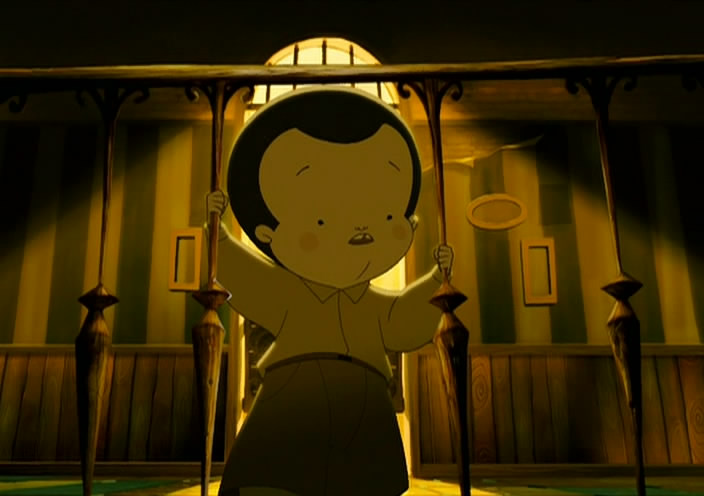