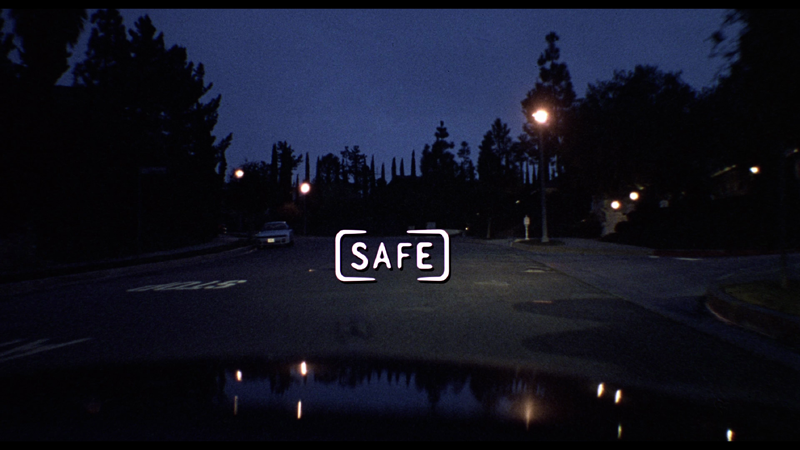 The Movie
For a film fan in 1998 who was enjoying Todd Hayne's breakthrough glam-rock drama Velvet Goldmine, and who most likely enjoyed Julianne Moore's incredible performance in the previous year's Boogie Nights, looking back to 1995 one could find an interesting junction between the two, as Safe offered Hayne's first mainstream directing gig and Moore's first leading role. A dark film about a woman whose own body (or perhaps mind) is turning against her, Safe is a disturbing film, not just in terms of the story, but in how that story is told, a masterwork of carefully constructed frames.

Carol (Moore) is the definition of average, a suburban housewife without ambition, purpose or desire, living out her days in California's San Fernando Valley in the late 1980s. She doesn't have much of a relationship with her husband or her stepson. She doesn't do much or anything interesting, with her biggest issues being picking up the dry cleaning or dealing with the delivery of the wrong colored couch to the house. But then, one day, she doesn't feel well. Soon, it gets worse, as truck exhaust sends her into a choking cough, a perm leads to a nosebleed and a friend's baby shower results in a panic attack. Doctors search for a reason, but come up empty, leading them to question her mental state. The only "answers" (a loose term if ever there was one) seem to be offered by a commune built around the idea of combating "environmental illness" with the power of positivity, as espoused by their leader Peter, an environmentally-sensitive man with AIDS. 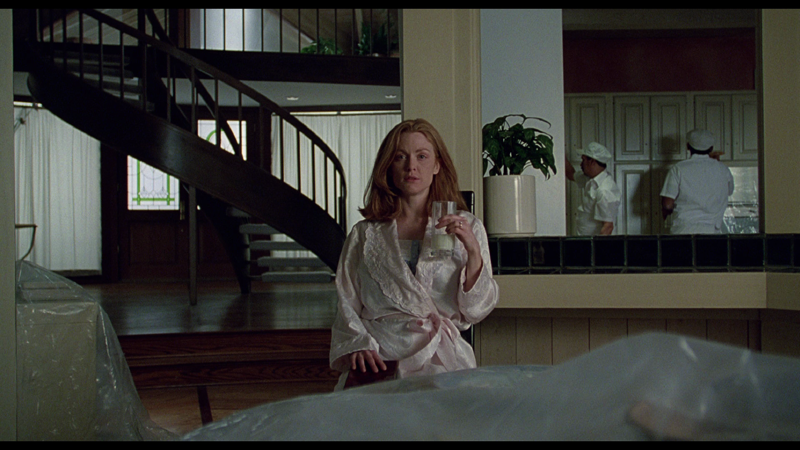 Though the story of Carol's plight and search for answers is engrossing, Safe is more about feeling than plot, as Haynes and company build a thick atmosphere of dread and uneasiness that slowly engulfs Carol's well-manicured suburban life. As close to non-participatory in her life as one can be while still technically being alive, she lacks connection with those around her, rendering sex passionless, conversations awkward and basic interactions painful. In another film, Carol would likely be a subject of parody, if not a villain worthy of scorn, but here, she's something akin to a heroine who engenders pity, or perhaps concern for her well-being, as her illness becomes her identity, subsuming her inert personality. It's a tricky feat for Haynes to attempt, but he makes you care about the concept of suffering from an unknown sickness rather than a traditional protagonist.

Part of the success is due to the beautiful way Haynes and his DP Alex Neomniaschy work together to first paint Carol's world as clean and well-ordered, and then systematically take it apart, evoking horror from the everyday, while visually making Carol a prisoner in her own life. The composition of shots, which includes a dependence on wide shots, purposefully makes Carol an uncomfortable observer trapped in moments that are not of her making. Any point at which her health becomes an issue is as fraught as the best slasher film, and though the movie prefers subtlety, as seen in an early conversation where all key information is heard only in the hesitant pauses rather than what's actually said, it can trade in abject creepiness as well, like when one of the commune's resident shuffles by in the near-distance wearing his self-isolating suit, a moment that gave the film its most iconic imagery.

Haynes' may have crafted an engaging world via words and images, including its somewhat obvious yet effective metaphor for the AIDS crisis active during the period film's era, but Moore is the engine that makes it all hum, her feather-soft voice and delicate features serving to ensure viewers will believe Carol's suffering, as the film explores the commune and the value of such alternate "medicine" in its most subversive gambit. Though ultimately there's nothing "there" when it comes to Carol's empty existence, a situation Haynes wisely avoids attempting to resolve, Moore makes you care. The empathy her performance draws from the audience sustains the film through the final moments, when a creeping sense that hope is futile could make one check out of a shorter film. However Haynes isn't done with his subject, and a final gutpunch awaits.

The Disc
Safe arrives on one Blu-ray, packed into Criterion's standard clear Blu-ray keepcase, which has a two-sided cover with chapter stops listed on the inside and a folded booklet. A static menu in Criterion's classic style, with the creepy image of Lester from the original poster, offers a choice to watch the film, select scenes and check out the special features. There are no audio options, but subtitles are available in English SDH.

The Quality
The 1.85:1, 1080p, AVC-encoded transfer was struck from a new 4K restoration overseen by Haynes, which cleaned up the image tremendously, resolving one of the major issues with the 2001 DVD. Though the movie can be a bit dull in terms of the color at times, mainly during the darker interior scenes, for the most part color is appropriate, capturing the ‘80s feel with plenty of pastels, while scenes at the commune look natural, offering the correct contrast. The level of detail is exceedingly high, grain is even and consistent, and the image is quite crisp, with solid black levels, which is huge for a key moment late in the film. There are no issues with digital distractions, and the clean-up handled any other problems found in previous pressings.

After getting a Dolby Digital 2.0 track on DVD, here Safe has an LPCM 1.0 track that delivers all of the nuance that makes the sound design and Ed Tomney's astounding score on this film sing. There are so many discrete elements that affect how the film feels, from the brilliantly selected diegetic songs, including Madonna and Billy Ocean, to minute elements like the rattle of Carol's oxygen tanks as it rolls behind her, and this track makes them all readily apparent. Listening to this crisp, rich presentation of Safe is an experience all on its own.

The Extras
After months of blockbuster releases, this one feels a little sleight in comparison, but there's still a nice amount of good stuff, starting with the audio commentary from the original DVD, featuring Haynes, Moore and Vachon (the origins are obvious when Haynes points out that the release was the first time the film would be available in its original aspect ratio, following its VHS release, which leads to talk about frame composition.) The track, which was recorded in 2001, six years after the film was released, stands in stark contrast with the film, as the light, friendly tone is very different than the feel of Safe, as the trio reminisce about the making of the film, sharing production details, set stories and the many ways in which Haynes' family aided in the effort. Moore's obvious devotion to the project is clear from how she discusses the film, though as it was the first time she'd seen the completed film, she does let Haynes and Vachon do some of the driving.

All three participants return for new interviews with Criterion, with Haynes and Moore sharing a friendly conversation (36:09). Over the course of their discussion they cover a variety of topics, including how she got her role, the themes in the movie, the visuals and how people saw the film when it came out and after some time in the ether. Vachon has her own chat (15:54) where she discusses her history with Haynes (backed by stills from Haynes' legally-challenged Superstar) their collaboration on his previous film Poison and the casting of Moore, as well as the film's connection to the AIDS crisis and its reception upon release. The added perspective of the years that have passed and the trio's experience in the industry make these interviews an excellent supplement to their earlier commentary.

Also found here is The Suicide (20:30), a film Haynes wrote and directed in 1978, while he was in high school. A trippy non-linear meditation on bullying, it feels very much of its time, and isn't exactly a harbinger of what was to come Haynes, but for the time period and his age at the time, it's an impressively creative work. Considering that up until 2014 Haynes thought it was lost, its inclusion here is a welcome bit of historical matter.

Also available is the film's trailer (1:19), a terrible attempt to mislead audiences into thinking Safe is a straightforward horror film or thriller, playing off the threat to Carol.

The set includes the usual Criterion booklet, which this time takes the form of a 16-panel fold-out, with notes on the release and a well-written overview of the film from Film Society of Lincoln Center programming director Dennis Lim. 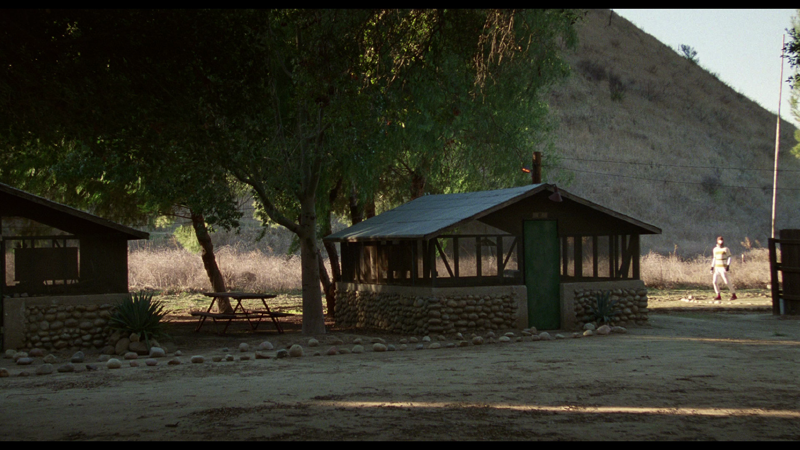 The Bottom Line
Safe is a truly affecting work thanks to Haynes' vision of a shell of a woman combating unknown forces threatening to destroy her, and Moore's skill at portraying that shell. Together, they create a terrifying horror film where the monster is modern life, and there are no solutions at the ready. Criterion has done their usual great job of delivering a cleaned-up presentation enhanced by thoughtful supplements, both new and archival, helping fill the gap left by the long out-of-print DVD. Nearly 20 years later, Safe has even more to say to audiences, and they may even understand this time around.