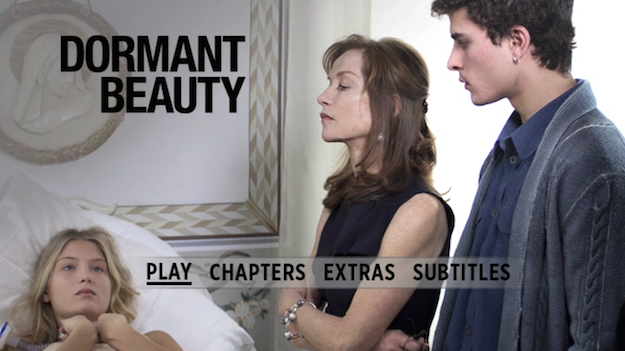 The video box art for 2012's Dormant Beauty (Bella Addormentata) prominently features French star Isabelle Huppert, and though she is probably the biggest "name" in the movie, she's not precisely central to the film. Instead, with this film, co-writer and director Marco Bellocchio (Fists in the Pocket, Vincere) takes a real-life moment from recent Italian history, when Eluana Englaro was taken off life support after seventeen years in a vegetative state, and fashions an almost Altmanesque multi-character tapestry around it. As with the Terri Schiavo case in this country, the religious right and the secular left turned the situation into a national debate and a media spectacle, and Bellocchio repurposes that moment as an inquiry into the values and belief systems at play here. He never wraps the issue up with a tidy bow, but he manages to do some interesting (and sporadically satisfying) probing.

The most engaging storyline involves an ex-socialist senator, played by The Great Beauty's Toni Servillo, who must choose between his conscience and party politics when he is called to Rome to vote with his party to "save" Eluana and reinstate the feeding tube. The senator believes that pulling the life support will help end the patient's suffering, as it did for his own wife years ago, when she asked him specifically to shut the machines down. As the senator talks to his colleagues and party leaders, it becomes clear that few of them are actually righteously inflamed to put this young woman back on life support: they just don't want to vote against the president for the sake of political prudence.

The other major storylines are interesting but don't as frequently carry as much dramatic interest. In one, the senator's daughter (Alba Rohrwacher), who opposes her father, makes a trip to protest taking Eluana off of life support. She ends up getting a crush on a young man who is protesting on the other side (Michele Riondino), and they sneak off to have a rendez-vous. Another involves a young doctor (Pier Giorgio Bellochio, the director's son) attempting to save a suicidal addict (Maya Sansa) from her own self-destructive impulses. Isabelle Huppert's storyline casts her as a great actress who has given up her work to stay by the side of her comatose daughter, kept alive with a breathing tube. Her son (Brenno Placido) just wishes his sister would die so that their mother can return to greatness.

Bellocchio is clearly a brilliant director, and he has assembled a uniformly talented cast, yet Dormant Beauty is not an entirely brilliant film. So many scenes in the film are beautifully executed and dramatically stunning, but there are also plenty of moments that are gorgeously shot and dramatically slack. The star-crossed love story seems particularly out-of-place, and considering the way that Bellocchio resolves it (or, rather, doesn't), it adds little of merit to the discussion. Still, the strong moments are what resonate, and one is left feeling more meaningfully provoked than willfully annoyed after the credits roll. Dormant Beauty provides only some small answers for the big questions that it poses, but it offers a vivid snapshot of modern Italy as one veteran filmmaker sees it.

The Video:
Kino Lorber offers up a clean, relatively problem-free widescreen 2.35:1 transfer. Cinematographer Daniele Ciprì frequently uses a low-key lighting style: dark ambience with subtle highlights on actors' faces. The transfer handles this style pretty well, as the image here has good shadow detail, with no crushing. In certain shots, the black level gets a little milky, but in general the blacks are strong. Detail overall is great for an SD presentation. Compression noise is minimal.

The Audio:
The only option is an Italian (and some French) Dolby 5.1 surround mix (with optional English subtitles). The film is pretty dialogue-focused, although the sound designers do make cleverly subtle and satisfying use of the surround speakers for certain ambience and brief snatches of musical score.

- A promo for the company that brought Dormant Beauty, The Great Beauty, and other Italian films to American cinemas in 2014.

Final Thoughts:
This is one of the few films I have reviewed for this site where I have actively fretted over the star rating. It's hard to exactly communicate how great and how frustrating different passages of this film are, by simply using a number. I don't think that this is a wholly successful film, but when it's working, it's fantastic. Maybe I've rated it too high. Or maybe I haven't given it enough credit. Well, whichever is true, Dormant Beauty comes Recommended.