Kundo: Age of the Rampant 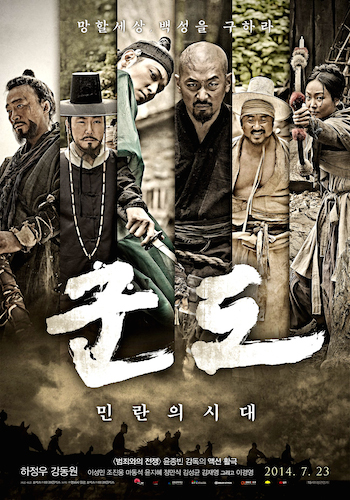 In much the same way that Akira Kurosawa cribbed some ideas for his samurai movies from shoot-'em-up westerns, which the westerns then cribbed right back, the new 19th Century-set Korean martial arts drama from director Yoon Jong-bin, Kundo: Age of the Rampant, plays like an example of Asian genre cinema absorbing the work of Quentin Tarantino, who himself has been repurposing and re-synthesizing aspects of Asian genre cinema his whole career. Granted, there are some other influences mixed up in there and, in the end, the film is forced to stand on its craftsmanship and entertainment value (which, in both cases, are remarkably solid), but it's hard not to trace back the nods to spaghetti westerns, the anachronistically vulgar dialogue, and the tendency for combatants to straight-up swagger as they approach (often in slow-motion) to a certain former video store clerk turned pop culture phenom.

Fortunately, unlike many irreverently reverent Tarantino-inspired glosses on the martial arts epic (like The RZA's The Man with the Iron Fists), Kundo is a film that cares as much about its story as it does about its style. That story mostly concerns the transformation of low-class, simpleton butcher Dolmuchi (Ha Jung-woo, The Berlin File) into a shaven-headed outlaw renamed Dochi and joined up with a ragtag group of Robin Hoods called the Chusul Clan. The pseudo-Sheriff of Nottingham in this case is the bastard son of a wealthy governor named Jo Yoon (Kang Dong-wan, Woochi: The Demon Slayer), who hires dirt-poor Dolmuchi to murder his pregnant sister-in-law, clearing the way for Jo Yoon to be the only possible heir to his father's title. Jo Yoon offers Dolmuchi a significant pay-day and claims the murder will be just like butchering an animal. When it's time to do the deed, the essentially good Dolmuchi falters and is beaten up by the Chusul Clan, who are guarding the pregnant woman. When Jo Yoon hears of Dolmuchi's failure, he has the butcher's family home burned to the ground.

Dolmuchi makes it out of the fire alive, with just some burns on his scalp, but the rest of the family is not so lucky. As a righteously angry Dolmuchi then storms the Governor's house with two meat cleavers, seeking to butcher Jo Yoon, the film seems like a classic revenge story about to kick into gear. But, Kundo instead takes a pleasantly surprising turn away from that narrative path. After trying to battle the impossibly talented Jo Yoon, the outmatched Dolmuchi is captured and condemned to die. Because of his spirit, he is saved by the Chusul Clan, who train him to be a warrior for the common good, rather than to satisfy his personal vendetta.

In his new persona as the bald-headed "Dochi," our main character becomes somewhat like Toshiro Mifune's wildman from Seven Samurai, acting out by cutting off the topknots of noblemen that the Chusul Clan encounters, but Dochi also tries to find his proper place within his new community. His mentors include a fighting monk (Lee Kyoung-young), a former military man (Lee Sung-min), and a brash lady who is deadly with a bow and arrow (Yoon Ji-hye). The film unfortunately doesn't offer up quite enough time to get to know all of these characters better -- even with a running time of 2 1/4 hours -- but it does offer some nice moments, such as the fumbling attempts of two different members of the clan to woo the archer woman (a plot thread with a surprisingly affecting payoff).

The second half of the film really cooks. Jo Yoon tries to solidify his position of power by stealing land and resources from the peasants to give over to the army, to get them on his side. Meanwhile, Dochi trains for his inevitable rematch with Jo Yoon while the Clan plots to undermine his abuse of the peasants. Kang is electrifying as the villain, Jo Yoon, making him alternately sympathetic, even seductive, and horrifyingly cruel. The script by Jeon Cheol-Hong is smart, too, in that it makes Jo Yoon a three-dimensional character warped by the political intrigue of noble life -- there are scenes in the movie where Jo Yoon is arguably the good guy to compliment his scenes of ugly villainy. This effort to develop the character in an unusual way allows us in the audience to invest in the story more than we might have expected to, and it gives the final showdown an unusual gravitas.

Overall, Kundo is a bit too lightweight to match the beloved films that inspired it, but that shouldn't be considered a serious demerit. It's still a really good action movie, with energetic performances, slick action setpieces, and a surprisingly thoughtful approach to its main characters that distinguishes it as more than just a genre exercise... which honestly might be the most important lesson the filmmakers picked up from Tarantino.

The Video:
The AVC-encoded 1080p 2.40:1 image is excellent. Details are sharp and the colors are vivid consistently. One or two shots show signs of posterization, probably due to some post-production futzing with the image, and I'm not a huge fan of the choice to go with a narrow-shutter, pseudo-Saving Private Ryan effect during many of the action scenes, but there are no apparent digital compression issues.

The Audio:
The disc offers Korean DTS-HD MA 5.1 surround and lossy Korean Dolby 2.0 stereo audio options (with optional English subtitles). Both tracks are clear, but oddly on the quiet side. Bass response is solid, but not much in the way of directional surround effects. Often times, the genre-hopping musical score by Jo Yeong-wook seems oddly buried in the mix. It's a perfectly fine soundtrack, but not a stunner by any means.

Special Features:
Just Well Go's trailer for the film, plus a few other Well Go previews.

Final Thoughts:
It can be hard for casual genre movie fans to figure out which foreign offerings are worth it, if it doesn't get a crazy buzz, like The Raid or something. Let me make this easy: See Kundo. It's not mind-searingly gonzo; it's just an extremely well-made action flick, with some laughs, some style, and some characters you'll want to watch for two hours plus. Highly Recommended.