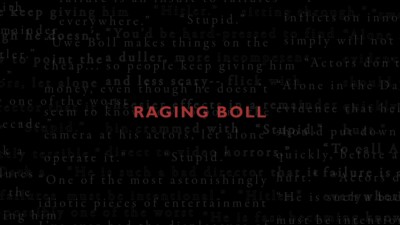 
The Movie
German director Uwe Boll's first mainstream movie was only released in 2003, but he's already pumped out a whopping 24 films since then. Unfortunately for him, the vast majority of them have been savaged by critics and ignored by audiences, with his video-game adaptations, like House of the Dead and BloodRayne, being particularly assailed by the source material's fervent fan base. Of course, he keeps finding money to make his movies, so something's working for him, but for most film fans, they'd rather he just give up and go away.

The critics who gleefully attack Boll and his films are the focus of Raging Boll, a documentary from Hollywood assistant Dan Lee West (who worked on a pair of Boll's films.) The documentary covers his 2006 challenge to critics of his films, where he took them on in the boxing ring. What this would prove isn't exactly clear, since neither man makes their living with boxing gloves on, but a handful of word slingers took the bait and met Boll in the squared circle. Did it go well? No.

Raging Boll's boxing scenes, which are disappointingly limited to a montage of all the bouts, end up being a bit secondary to the rest of the film though, which is mainly about Boll's reaction to his critics and his adventures in the world of show business. The movie does a fine job of filling in viewers on Boll's backstory, including his childhood and interest in film, while exploring his early American films and his online battles. The film is pretty even-handed in showing the many (often over-the-top) attacks Boll is subjected to, and makes some fine points about the motivation of some critics, the internet's effect on criticism and Boll's own mistakes in the battle (even if Boll comes off as a bit petty in his defense of his own film knowledge.) As Boll, sitting angrily in a darkened room, is the only one who offers an opinion on the matter (and any other topic in the film) there's a lack of perspective though. 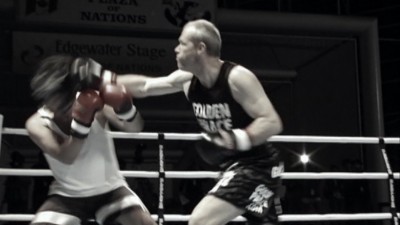 Where the film really succeeds is in looking at Boll's experience in the business of film, mainly via his epic misstep In the Name of the King. The camera watches as he attempts to get a distribution deal for his biggest-budget film, explains his business plan for profitability and tries to woo studios with screenings of his movie. If you are not a fan of his work, the schadenfreude is palpable as you watch him struggle, before and after his boxing exhibition, with his follow-up, Postal getting released D.O.A., but you'll definitely learn a bit about indie film financing.

Though the film is very much pro-Boll (largely thanks to having just one interview subject), it can't hide the fact that box-office response has often matched the lack of critical acclaim. As it's based in fact and cold, hard dollars, the films' failures is one thing the documentary can't gloss over. The boxing matches, on the other hand, are another story, with Boll presented as a conquering hero, when the story told about the bouts online by people who were involved, has a decidedly different tone. If this film had just been more open and offered more perspectives, it could have been far more effective, rather than the attempt at propaganda it stands as. 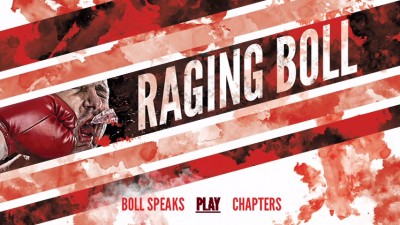 The DVD
The film arrives on one DVD, which is packed in a standard keepcase, with a promotional insert from Olive Films. The disc has a static. anamorphic widescreen menu with options to watch the film, select scenes and check out the extra. There are no audio options and no subtitles or closed captioning.

The Quality
The anamorphic widescreen transfer is decent for a low-budget documentary, with a cool palette that feels a touch undersaturated, while the fine detail is good, but not great. There are no notable issues with compression artifacts.

The audio is presented in a Dolby Digital 2.0 track that's basic, delivering clean audio that has no real downsides, as the voices and score stand apart. Everything is legible and easy to understand, though Boll's accent makes his use of the word "negative" sound pretty bad in it's first two syllables.

The Extras
The only extra is a 48-second intro from Boll himself, who talks a bit about the movie, but mostly about the director's effort in creating it. Don't expect this sub-minute clip to offer any real insight. 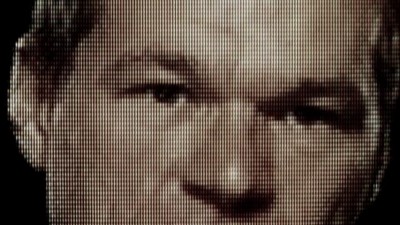 The Bottom Line
If you like Boll, this pep rally will be right up your alley. If you want a peek at the independent film business or the backlash against one of the most hated directors working today, Raging Boll can be pretty interesting. But as an objective documentary about Boll's difficult relationship with viewers and critics, it doesn't work, coming off as way too fawning by giving only Boll a real voice. The DVD looks and sounds fine, but offers no real extras, so the release remains a novelty at best, mainly of interest to the people who hold Boll in disdain.