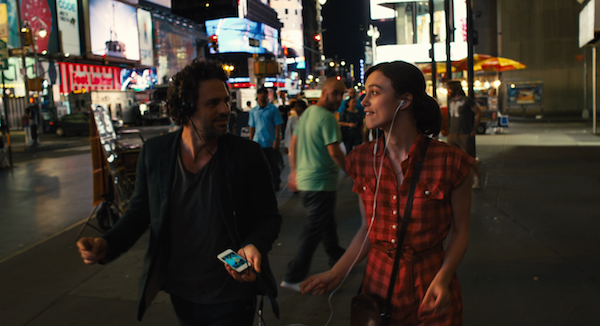 After taking a strange, largely unnoticed turn into broad comedy with Zonad, director/songwriter John Carney has returned with another earnest tribute to the redemptive power of music. While it would be tempting to snark that Carney decided to make "Once Again" ("Again" is even in the new movie's title!), Carney's Begin Again manages to focus on themes similar to those in his 2006 sleeper hit without becoming a total retread.

In fact, this delightful souffle has as much in common with Jon Favreau's recent comedy Chef as it does with Once. Like Chef, Begin Again tells the story of a middle-aged guy who finds himself out of work and out of step within the creative business that has been his entire life. Both films detail the main character's effort to reclaim himself by attempting a new grassroots project that inevitably revitalizes his love for his work and even improves his relationship with his ex-wife and his kid.

Don't get me wrong. I really enjoyed both Chef and Begin Again, but even I have to admit that their plots are paper-thin. What works best in both cases is the easy camaraderie of the cast members and the unforced enthusiasm for the subject matter.

An appropriately scruffy Mark Ruffalo stars as Dan, a pseudo-boho record label executive who gets fired from the company he co-founded by his more business-minded partner, Saul (yasiin bey, formerly known as Mos Def). While on a bender, he stumbles into a bar during open mic night and hears a young singer-songwriter with enough promise to make him want to immediately sign her... oh, if only he still worked at a record label!

Dan brings the young woman, Gretta (Keira Knightley), to play her music in front of his former partner Saul, but the suit thinks her act is a little undercooked. Dan hears full, Norah Jones-y arrangements in his head, so he asks Saul for a second chance to properly record and present Gretta's music. Saul agrees, so Dan decides to recruit a band of hungry musicians who will work cheaply (not the classiest move, but I'll let it slide for the sake of narrative conciseness), along with Gretta's friend Steve (The Wrong Mans' James Corden) as the recording engineer. Together, this ragtag crew will create impromptu recording sessions on the streets, subway platforms, and rooftops of New York.

The film has a tendency toward preciousness on a basic conceptual level. Thankfully, that preciousness is complimented by playfully experimental storytelling strategies, such as a fractured chronology that actually enriches the character development. The film begins with Gretta performing her song at the open mic on an empty stage to an unresponsive crowd, save for one audience member: Dan. Then the film doubles back to fill us in on Dan's firing and his strained relationships with his teenage daughter Violet (True Grit's Hailee Steinfeld) and the wife from which he has separated, Miriam (Catherine Keener). At the end of that 20+-minute sequence, the film basically resets and does the same thing all over again for Gretta, showing how she came to New York with her singer-songwriter boyfriend, Dave (Adam Levine, of the pop band Maroon 5). Dave has been signed to a big record label, and the process of becoming a hitmaking rock star warps him, in Gretta's eyes (the meta-joke for people who don't like Maroon 5's music is that Dave essentially mutates into Adam Levine).

Not counting the idealized rehearsal and recording session sequences (which are portrayed as being nothing but creative bliss), there are three major moments in the film where the power of music is explored and charmingly extolled. The first comes at the end of Dan's flashback, when he sees Gretta's performance at the open mic. As he listens to her, he begins to hear the arrangement filling out around her -- a drumbeat here, a cello part there, some piano accompaniment over there -- and we hear it too. Not only do we hear it, we see it, as the instruments start playing themselves, like something out of an Adventures In Music cartoon by Disney. It's a moment that risks being unintentionally funny, but actually works surprisingly well, illustrating how the power of a composition can be unlocked through skillful record production and arrangement. Another music-is-awesome moment involves a party game where the gregarious Steve puts on a song and dares the guests not to dance to it; inevitably the groove is just too funky and the whole room is compelled to move. The most charming sequence about music-loving involves Dan and Gretta using a headphone wire-splitter, which allows them to listen at the same time to the same music stored on one of their phones; the device allows them to create a conversation through song selection, as they wander the streets of New York.

Begin Again is well-acted, good-looking, and thoroughly entertaining. As a music obsessive, there were plenty of moments where my B.S. detector went off, but the movie is so well-meaning that it seems silly to pick apart its scattered inconsistencies. If you like acoustic music, or you make acoustic music, then you should have a fun, fairly uncomplicated time with Begin Again. 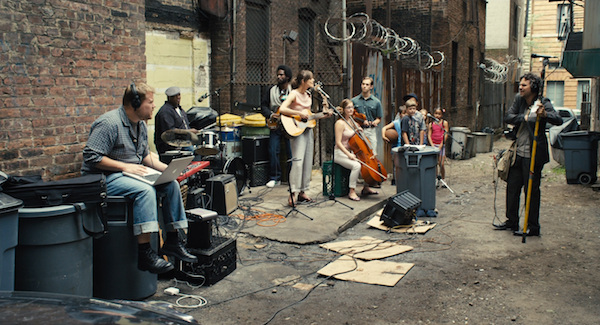 The Blu-ray
The Begin Again disc comes packaged with a code for Ultraviolet streaming.

The Video:
Apart from a few shots marred by a bit of color bleeding, thanks to a red spotlight (an issue which I suspect was probably present in the digitally captured "negative"), this is an otherwise defect-free AVC-encoded 1080p 1.85:1 transfer. There are no artifacts and no banding. The colors are richly saturated (Yaron Orbach's cinematography tends toward a golden hue here, so skin-tones look pleasantly honeyish). The blacks are inky, with an excellent amount of shadow detail. The reproduction of fine detail in general is outstanding.

The Audio:
The only available audio option is a DTS-HD MA 5.1 mix that sounds clear as a bell, with a robust bass response. Though there's not a lot of directional effects, the sound designers did a good job with atmosphere and they nicely situate the music within the scenes the film portrays. The disc offers English SDH and Spanish subtitle tracks, but neither appear onscreen during the many song performances in the film -- which is SO FRUSTRATING!

Special Features:
(HD, 20:53) - Unfortunately, this is a pretty fluffy EPK. It includes some interviews with the cast and a smidge of on-set footage, but it also relies heavily on clips from the movie. Not exceptionally illuminating.

Final Thoughts:
Though it's not as startlingly fresh and unusual as director John Carney's feature debut, Once, the new musical drama Begin Again is another heartfelt tribute to music and musicians that's a heck of a lot of fun to watch. The bonuses are pretty skippable, but the feature looks and sounds great. Highly Recommended. 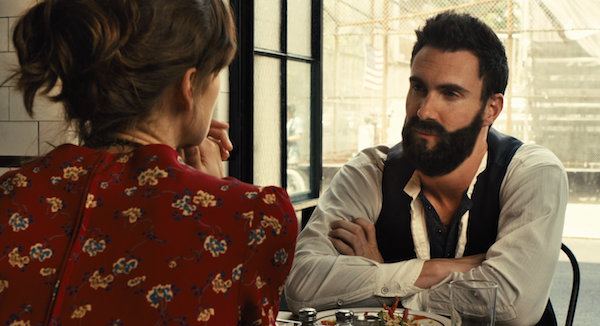