Kino // PG // December 9, 2014
List Price: $29.95 [Buy now and save at Amazon]
Review by Stuart Galbraith IV | posted January 3, 2015 | E-mail the Author
Having just reviewed Kino Lorber's release of that other highly-anticipated revisionist Bicentennial Western from a major director with big stars that proved a colossal critical and commercial disaster, Robert Altman's Buffalo Bill and the Indians, or Sitting Bull's History Lesson, I confess to approaching The Missouri Breaks (also 1976) with a lot of trepidation. It turns out that Arthur Penn's film, famously pairing for the first and last time Marlon Brando and Jack Nicholson, is mostly intelligent and understated - though it's also almost fatally wounded by Brando's appallingly hammy, utterly indulgent performance.

This was Brando's first movie in two years, following the one-two punch of The Godfather and Last Tango in Paris (both 1972), the latter featuring Brando's last truly great screen acting. His next movie after The Missouri Breaks was Superman, a supporting part for which he was, nonetheless, top-billed and famously paid $3.7 million and 11.75% of the gross profits for just 13 days work. Trivial as his role might have been playing Superman's father, Jor-El, onscreen at least Brando came off fairly well in that picture, mainly because director Richard Donner wouldn't put up with Brando's self-sabotaging eccentricities: Brando initially told Donner that he wanted to play Jor-El as a bagel.

Despite years of experience with difficult actors (Paul Newman, Dustin Hoffman), Arthur Penn clearly threw in the towel with Brando, in the first round judging by the film. Brando's like the naughty boy at the school Christmas pageant, making faces on stage while everyone else onstage is trying their best. He embarrasses all, but makes the biggest fool of himself.

It's a terrible shame. Much of The Missouri Breaks hints at greatness. All of the scenes focusing on Nicholson's character are intriguing, and about half of those are outstanding. Even with Brando's shameful overacting, The Missouri Breaks still has more than enough to recommend it. In short, contemporary critics who crucified the film were right about Brando, wrong about the movie overall.

Kino Lorber's high-def transfer of Buffalo Bill was awfully blah, but the image and sound on The Missouri Breaks is much, much better, a relief as the subtle, effectively cinematography is another of the film's major assets. 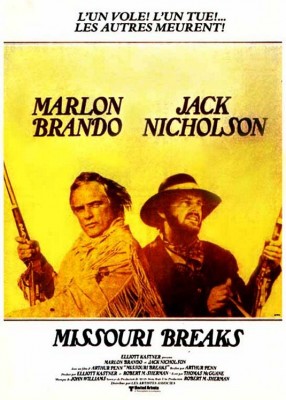 In north central Montana (where the Missouri River has cut into the land, making deep "breaks") horse thief Tom Logan (Nicholson) is growing weary of his hand-to-mouth existence as a horse thief, especially after a member of his gang is hanged by sanctimonious rancher-despot David Braxton (John McLiam).

The surviving members - Little Tod (Randy Quaid), Cary (Frederic Forrest), Si (John P. Ryan), and Cal (Harry Dean Stanton), Logan's unofficial lieutenant - murder Braxton's ramrod in revenge, then try robbing a train, but their haul is modest, and in $1 bills. Logan uses the money to buy a small ranch near Braxton's, while the others ride north to the Canadian border, planning to steal horses corralled at a Royal Canadian Mounted Police fort.

Logan stays at the ranch, planting crops as a front for the gang's activities, while Braxton, obsessed with his 7% losses due to rustling, hires a flamboyant "regulator" (paid assassin), Robert E. Lee Clayton (Brando), to gun them down. Clayton suspects Logan almost at once, and the film becomes a tense game of cat-and-mouse.

What's most interesting about The Missouri Breaks is Nicholson's character. Logan is dead tired of rustling, sees no future in it, and when he starts working the small ranch he's bought he quickly sheds his former, small-time criminal identity. When Cal, Harry Dean Stanton's character, limps back home to the ranch, he's startled to hear Logan ramble on about all the progress he's made planting vegetables and how much more fruit their apple tree will bear. Logan, noticing Cal's bemused expression, is wounded at the realization that, oh yes, he's a horse thief, not a farmer, after all.

Logan's largely unstated dissatisfaction with his chosen profession and quiet desperation to get out is, for the most part, extremely well done, and Nicholson is superb. Though he had been acting since at least the mid-1950s, Harry Dean Stanton was just starting to land plum roles and this remains one of his best. As with other members of the gang, screenwriter Thomas McGuane fleshes out Stanton's character in compelling, believable little ways. In a beautifully acted scene with Nicholson, Cal explains how, as a boy, the uncle raising him shot a beloved dog, all because the dog "put his tongue" on a plate of butter. Thanks to Stanton's fine acting (and Nicholson's reaction shots), the viewer can plainly see how Cal's entire life was shaped by something that happened to him decades earlier, an incident that the movie audience never sees but clearly understands.

Indeed, all of the acting is very good-to-excellent throughout, including by many longtime pals of Nicholson: Luana Anders (in an amusing, throwaway bit with Ryan), Dorothy Nuemann (from The Terror), Quaid, Ryan, et al.

And then there's Brando. Lordy! For most of the movie, Brando seems to doing an imitation of Irish character actor Barry Fitzgerald only foppish, but demented like Charles Manson. However, about 20% of the time Brando speaks with other accents, in one long sequence masquerading as a Southern minister-turned-rustler, cozying up to Randy Quaid's character. Does this mean Clayton's Irish brogue is phony also, or is he supposed to be Irish pretending to be American in those scenes? Who can say?

In the picture's most criticized scene, Brando disguises himself as a woman, donning a prairie dress for no good reason. The scene takes place in the middle of night, a time no self-respecting pioneer woman would be out riding in the wilderness, nor does the disguise serve any purpose as it fools no one. While Clayton is written as a flamboyant gunman, it's clear from the start that Brando is indulging himself rather than trying to legitimately shape a characterization or service the film. No one, it seems, questioned his consistently bad decisions. One imagines a set much like that Twilight Zone episode with Billy Mumy: "It's good what you done, Marlon. A real good thing." Adding to the silliness are painfully obvious attempts to hide Brando's ballooning weight. For instance, he's introduced in a very awkwardly composed shot, the actor's stomach obscured behind a horse's neck. In a later scene, Brando's bod is hidden under bubbles in a bath, but the scene requires him to reach around the tub at one point, exposing his gut (and the ruse) in the end.

The lone extra is a trailer, which doesn't sell the film very well.

The Missouri Breaks is very worthwhile, though Brando successfully sabotages its full potential with an alarmingly bad performance at odds with some really fine work scattered throughout the rest of the picture. Still, it's Recommended.