Shout Factory // PG // January 13, 2015
List Price: $24.97 [Buy now and save at Amazon]
Review by Stuart Galbraith IV | posted January 19, 2015 | E-mail the Author
German director-screenwriter Werner Herzog makes movies like no other. His best fiction features - in recent years he's become as famous for his documentaries - are hypnotic, dream-like mediations on obsession/passion/compulsion and often the clash of foreign plunderers, native peoples, and their natural environments, sometimes told in operatic terms. His period films especially are notable in terms of their vivid historical environments. Others try to achieve this through the use of meticulously researched props and costumes but, somehow, Herzog's films go one step further. They're singularly immersive, sometimes in settings most viewers are unfamiliar with, and the effect is like stepping backward in time, something Herzog does better than just about anybody. As my colleague DVD Savant puts it, Fitzcarraldo has the truth of a documentary.

Herzog's great legacy to date is his stormy (to say the least) collaborations with certifiably psychotic actor Klaus Kinski (1926-1991). Aguirre, the Wrath of God (1972) and Fitzcarraldo (1982) are still Herzog's best films to date, each uniquely mesmerizing.

Fitzcarraldo is about an opera-obsessed Irishman in Peru at the beginning of the 20th century. A perennial failure in all his other business ventures (a remote railway, ice-making), he becomes determined to transport a 300-ton steamship over a steep hill in order to access rich but inaccessible rubber trees beyond. It began shooting with Jason Robards in the lead (and with Mick Jagger playing his assistant), unimaginable casting in light of Kinski's performance. As much as 40% of Robards's scenes were shot before the actor left the production, citing health concerns, though some sources cite weather delays and other problems. Herzog considered replacing Robards with Jack Nicholson or even Herzog himself before settling on collaborator-nemesis Kinski. (Jagger's part was dropped altogether.)

With Kinski, it's difficult to imagine Barry Sweeney Fitzgerald - "Fitzcarraldo" to the locals - as anything other than completely nuts but, especially upon multiple viewings, Fitz's mental state is much more subtly complex than that. I have a very Fitzcarraldo-type friend here in Japan that I've known for years, but whether he's a madman or some kind of genius who, so far, has been unable to realize his grand ambitions, I cannot say. In the movie Fitzcarraldo is described as "Conquistador of the Useless," while his girlfriend defends him saying, "It's only the dreamers who build mountains." Maybe so.

Shout! Factory's new Blu-ray for the most part substantially improves upon Anchor Bay's excellent 2004 DVD boxed set, Herzog/Kinski: A Film Legacy. At times the HD transfer tries a little too hard to squeeze every last drop of picture information, resulting in some digital breakup, but mostly it looks great, and the DTS-HD Master Audio 5.1 mix of the English version is more immersive than ever. 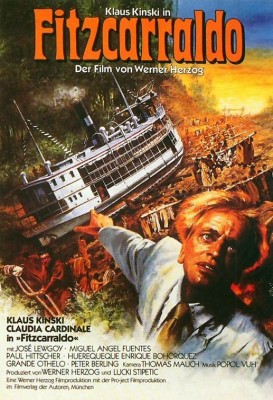 Brian Sweeney "Fitzcarraldo" Fitzgerald (Kinski) and his beautiful girlfriend, brothel owner Molly (Claudia Cardinale), travel down the Amazon for many days, rowing toward the end when their boat's engine gives out, so Fitzcarraldo can catch a rare South American performance by iconic tenor Enrico Caruso. Fitzcarraldo has no ticket, but a sympathetic usher lets him in, and he's transformed by the experience.

Obscenely wealthy but gregarious rubber baron Don Aquilino (José Lewgoy) alerts Fitzcarraldo to rubber tree-rich but undeveloped region up the Ucayali, undeveloped only because of deadly rapids through which no steamship can pass. With Molly staking him, Fitzcarraldo leases the land from the Peruvian government and buys an old steamer from Aquilino. His plan is ingenious yet seemingly impossible: to take the steamer up the Pachitea, an adjacent tributary of the Amazon, and where the Pachitea and Ucayali rivers nearly parallel within a few hundred meters of one another, Fitzcarraldo plans to drag the steamer over the steep hill separating them. Once relocated, the steamer will be able to carry rubber upstream, with rubber shipped down the Ucayali to Iquitos on another steamship. Then, he envisions, he'll be able to realize his ultimate goal: to build a grand opera house and bring in Caruso.

The steamer makes a precarious journey up the Pachitea, an almost prehistoric part of the world populated by indigenous headhunters. When most of Fitzcarraldo's crew fearfully abandons ship - leaving only its captain (Paul Hittscher, possibly dubbed by Robert Rietty), the cook (Huerequeque Enrique Bohórquez), and first mate Cholo (Miguel Ángel Fuentes) - the Indians come aboard. But so determined is Fitzcarraldo to see his dream realized that he stands his ground, as if too stubborn to be terrified. In an unforgettable sequence, he and the natives gently touch each other's fingers, their version, apparently, of a handshake). He forms a tenuous alliance, allowing the native people to help him drag the steamship over the steep (about 40 degree) hill, even though he's baffled as to why they would want to help him at all.

With his shock of yellow hair, big floppy ears, full and pouty lips, and piercing, egg-like eyes, Klaus Kinski was usually cast as psychopaths, particularly in his earlier, West German krimi days. First-time viewers to Fitzcarraldo are to be forgiven thinking the movie is merely a portrait of one madman's obsession. Yet, in Les Blank's wonderful documentary about the making of Fitzcarraldo, Burden of Dreams (1982), Herzog's descriptions of himself might easily be applied to Fitzcarraldo: "If I abandon this project, I would be a man without dreams [like] cows in a field and I don't want to live like that."

Is Fitzcarraldo crazy or merely uniquely single-minded? Is he insane or, perhaps, an unheralded visionary? The film's final scene suggests the latter, with Fitzcarraldo unquestionably triumphant. As great an actor as Jason Robards was, it's impossible to imagine anyone other than Kinski in the role now. Where Robards often wouldn't fully commit to some parts (e.g., his sleepwalking Brutus in Julius Caesar), Kinski never seems to have given less than 500% even in his worst films. In both Burden of Dreams and Herzog's later, astounding documentary about his films with Kinski, My Best Fiend, the actor's behavior on the set of Fitzcarraldo would be considered every director's worst nightmare were such behavior imaginable in the first place. Clearly, Kinski knew a thing or two about men like Fitzcarraldo: it's Kinski's greatest film performance.

Fitzcarraldo is an odyssey crammed with innumerable poetic images: a fat soprano providing the singing voice for a female impersonator lip-synching onstage, performing with Caruso in that first concert; an upturned umbrella drifting down the Pachitea, perhaps a final warning from the headhunters; the aforementioned touching of fingertips; Fitzcarraldo playing gramophone records of Caruso from the roof of the steamer, confident the tenor's voice will quiet the savage's war drums. And, of course, there's the image of that steamer inching its way up the steep hill, an incredible accomplishment by both Fitzcarraldo and Fitzcarraldo's director, completed without the aid of special effects.

Shout! Factory's Blu-ray of Fitzcarraldo's 1.85:1 HD presentation mostly looks great. Here and there, during particularly dark scenes, contrast has been boosted and the image tweaked to squeeze a bit more color and picture out of film stock undoubtedly kept and stored in the steaming, hot jungle, and probably hundreds of miles from the nearest film lab. The results, particularly obvious in some of the darker scenes, are much digital artifacting, though the rest of the transfer looks very good. Like the DVD, the 5.1 mix, here DTS-HD Master Audio on the English track, is deeply (that word again) immersive, putting the viewing into the thick of this nearly prehistoric jungle with the actors. Most or all of the film appears to have been dubbed in postproduction, but everyone's scenes were spoken in English, and Kinski's and Cardinale's own voices are clearly on this track, so making it the default language seems reasonable. A German 2.0 DTS-HD Master Audio option is offered with removable English subtitles, and the PG-rated film is region A encoded.

Supplements appear to be identical to Anchor Bay's earlier DVD release. There are two audio commentaries with Herzog, one in English (where he's joined by co-producer Lucki Stipetic), the other in German. A trailer is also included.

One of the great films of the 1980s, indeed one of the great masterpieces of all of cinema, Fitzcarraldo is a must-see, very accessible, and a DVD Talk Collector Series title.