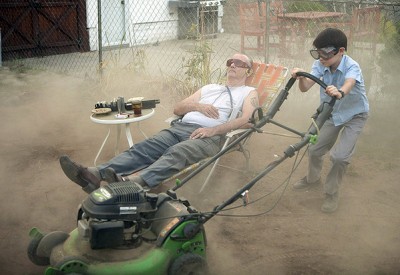 The irrepressible and irascible Bill Murray stars in St. Vincent, his entry in the grumpy-old-man genre, something that in and of itself carries no shame, though you might want to come to this with a tad bit of cynicism anyway: St. Vincent is a comedy that pairs the grumpy old man with a kid.

Murray plays Vincent, or Vin to his friends, a long-time New Yorker who lives on his own in the suburbs in a house with a driveway and a white picket fence. At the start of St. Vincent, a besotted Vin backs his car over said fence, demolishing it and his mailbox. Shortly thereafter, he slips on a piece of ice while feeding his cat, bangs his head, and nearly dies. As a set-up to a motion picture, it's one hell of a crystal ball into my future. Glad I drink my whiskey neat!

Suffice to say, Vin is in a bad way. He is broke and in debt to his bookie (Terrence Howard), and the Russian stripper prostitute (Naomi Watts) that serves as the closest thing he has to a relationship is pregnant. Sounds like an ideal time for a perfectly pleasant CAT scan technician (Melissa McCarthy) and her son Oliver (Jaeden Lieberher) to move in next door. The soon-to-be-single mom, Maggie, is hoping to build a better life away from her philandering husband (Scott Adsit), but circumstances align against her and the requirements of a new job and bullies at the boy's school make it so Vin has to look after Oliver in the evenings. Cue funny montages of Vin taking Oliver to the track, and then to the bar, and teaching him such mysterious phrases as "lady of the night." 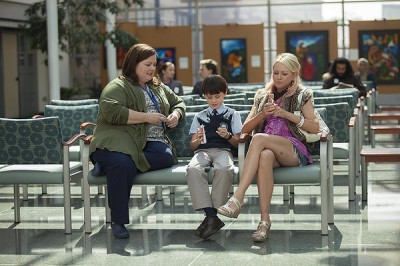 It's all predictable, but harmless enough. Writer/director Theodore Melfi's major-league debut is hard to dislike and certainly will work as a crowd-pleaser for folks looking to warm their hearts. For all the salty language and Vin's rowdy lifestyle, there is a nice message here and a genuine sense of inclusion. The film's title derives from a class project of Oliver's, given to him by his teacher (an affable Chris O'Dowd) at the Catholic school he's attending. The school, which harbors children of many different faiths behind its walls, wants the children to see how to be saintly is to employ a variety of different admirable traits in one's own life despite one's personal, and altogether human, obstacles and flaws. Hmmmm, I wonder who Oliver picks for his project?

The truth is, outside of having seen this all before, there isn't much to gripe about St. Vincent. The more ribald humor is toothless, but the relationships between all the characters come off as genuine. Naomi Watts, wearing pink sweats and adopting a heavy accent, appears to be slumming it, but enjoying herself, and McCarthy trades her usual routine for something far more grounded. The kid's even good.

When it comes down to it, though, this is Bill Murray's show, and for whatever other positive things I may say, it's really only because of Bill Murray that you'll want to see St. Vincent. He's the only thing providing real ballast against the negatives, as well. His portrayal as the lonely veteran is a knock-out. He is lovably grouchy by nature, and so cakewalks through Vin's more colorful rants, while also pulling off a believable downshift in the scenes where the old fart's guard drops and he has to be really sweet.

His best stuff, though, comes after a third-act turn that, while not exactly a spoiler, is maybe best left unspoken. It requires a change in the character, and the actor takes that on without overselling the alteration or milking it to garner the attention of the Academy. Though hopefully they'll sit up and take notice anyway. I enjoyed Murray here far more than I did in Hyde Park on the Hudson.

Honestly, Bill Murray deserves a better script. The whole cast does. But in terms of making due with what he's got...well, he definitely makes sure St. Vincent will at least deliver on the ticket price, even if the after-effects are almost nil. 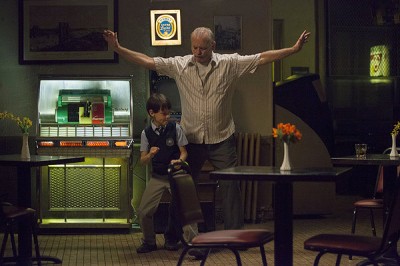