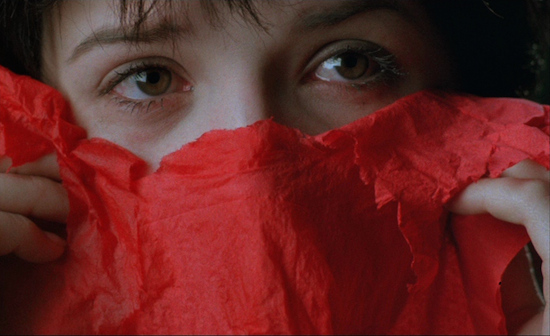 Like his debut film Boy Meets Girl, writer-director Leos Carax's second feature, 1986's Mauvais Sang (the literal translation is "Bad Blood," although the UK title was The Night Is Young), focuses on a lovesick young man named Alex, played by Denis Lavant. With his scrawny physique and lumpy face, Lavant isn't what one would typically picture as a leading man, but his odd physical grace and willingness to do the more grueling stunts that Carax conceived for this film more than justifies his return to the lead.

This time around, the plot of Carax's film is more elaborate though no less arbitrary. Veteran actor Michel Piccoli memorably appears as Marc, an over-the-hill gangster whose friend and colleague falls in front of a subway train. Though the papers suggest suicide, Marc suspects foul play orchestrated by a character known only as "The American Woman" (Carroll Brooks, who played the party hostess in Boy Meets Girl). Though The American Woman denies responsibility, she does give Marc an ultimatum to pay his friend's debt in two weeks, or else it's curtains. Marc and his partner Hans (Hans Meyer) decide a heist is necessary to raise those funds, so they recruit the son of their fallen comrade, a kid named Alex (Lavant) who shares his late father's nimble fingers. Alex is recently out of prison, fairly disaffected and bookish, stuck doing a three-card monte hustle to pay the bills. He sees his father's death as a signal to start a new life, so he takes the heist job solely for some getaway money. Alex leaves behind a lover, Lise (an extremely young-looking Julie Delpy), who refuses to let him go. If Alex is abandoning love in the name of starting a new life, he doesn't do a great job: immediately after he joins the heist gang, he becomes smitten with Marc's decades-younger girlfriend Anna (Juliette Binoche). This set-up is pure film noir melodrama, but Carax predictably subverts genre expectations left and right.

The first thirty-five minutes of the film maintain a fairly snappy pace, even taking into consideration some dreamy interludes like the introduction of Anna on a city bus, where Carax withholds Juliette Binoche's face from the audience, forcing us to try to make out her details in hazy reflections. This opening chunk also includes an elaborate parachuting setpiece, where Alex has to rescue Anna after she has fainted and her chute has failed to open. This passage of the film eventually climaxes with a fistfight between Alex and Marc when Marc refuses to say, "I love you," to Anna before she goes to bed. The fight causes Marc to become physically weakened, and Hans (a disgraced doctor) gives him a shot to put him down for the night.

With Marc out of the picture, everything slows down for the next thirty-five minutes and seemingly turns into a different movie. Like the extended kitchen conversations in Boy Meets Girl, this section just features Alex and Anna talking into the wee hours. Alex repeatedly tries to convince Anna to leave the old man, but she wavers only slightly. Anna is charmed by Alex and they have great chemistry, but she is both too in love and too afraid to ever leave Marc.

Leos Carax was in love with Juliette Binoche at the time Mauvais Sang was made, and it is apparent in the tender ways that he and cinematographer Jean-Yves Escoffier choose to film her. Alex comments on Anna's (and, by extension, Binoche's) lips and face, saying she could have been a silent movie actress; no doubt, Carax was in agreement. Carax and his production team's selective use of color also helps to make Binoche pop off the screen. The general design of the film is based on black, brown, white, and shades of grey, with only minor accents of color, so when the Anna character wears a red sweater or a bright blue bathrobe, the eye can't help being drawn to her in every shot.

During the more sedate middle stretch of the film, Carax is as full of experiments as he is in the more traditional bookending sections. In what might be the film's most famous sequence (one that was echoed later in Frances Ha), Alex turns on the radio and goes out for a smoke. The radio starts broadcasting David Bowie's "Modern Love," which gives Alex knots in his stomach and inspires him to run down the street, executing a semi-spastic dance choreography as the alternately white-and-black fences behind him create the appearance of a zoetrope in action. In another moment, to stop Anna from crying, Alex performs some physically impossible gags, such as tossing a ball in the air and having it return to his hand as an apple or a bunch of leeks. After Anna has gone to bed, Alex pushes over a small car parked half on the curb; the reaction shot of a nearby hotel clerk probably gave me the biggest laugh I've experienced outside of a traditional comedy.

When Alex and Anna's long night ends, and the film returns to business as usual, it still could never be mistaken for a traditional heist movie. For one thing, the MacGuffin is like something out of a fairy tale. Alex has to go into a pharmaceutical company and steal an AIDS-like virus that infects couples when they make love if only one person in the relationship is in love. Later, during the heist, the cops arrive and Alex's high-concept getaway plan is the kind of thing that wouldn't even typically work in a movie, let alone in the real world.

With Mauvais Sang, Leos Carax seems to have taken another page from the Jean-Luc Godard playbook, setting his romantic musings and aesthetic experiments against the backdrop of a pulpy genre plot. The execution, though, seems less beholden to Carax's cinematic forefathers than in his first film, Boy Meets Girl. Sure, there are still stylistic references, and at one point a character claims to spot the late Jean Cocteau sitting nearby in a restaurant, but the filmmaker definitely seems to be coming into his own. Mauvais Sang is alternately madcap and muted, joyous and heartbreaking. It's a hell of a movie. 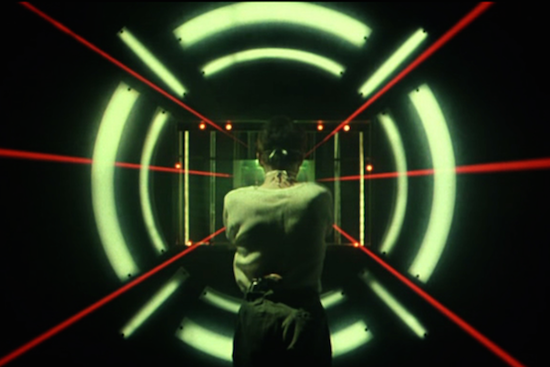 The Video:
Like the restoration job that was done on Boy Meets Girl, this AVC-encoded 1080p 1.66:1 presentation from Carlotta Films looks perfect. No compression issues. The film grain structure is intact. The amount of fine detail and shadow detail is exemplary. Unlike Boy Meets Girl, this film is in color and they haven't dropped the ball in that department either. Like I stated above, the color palette is largely muted with selected bursts of color, like Anna's red sweater or Alex's yellow leather jacket, and this transfer truly allows those accents to pop without going over the top. The actors' skin tones all appear accurate and lifelike. Just a gorgeous transfer.

The Audio:
Consistent with the quality of all the other restoration work, the DTS-HD MA French mono audio (with optional English subtitles) is pristine. The soundtrack this time is not as surrealistic as Boy Meets Girl, although it is still carefully designed. The dialogue and effects are all crisp and clean, and the small selection of music cues are appropriately full-bodied, even after the mono mixdown.

(HD, 1:13:16) - A feature documentary by Tessa Louise-Salomé, who did the Drive In Holy Motors featurette. Blending interviews with critics, friends, and actors, the film creates an engaging portrait of Carax's career in generally chronological order, although with a fluid editorial sense that picks up on thematic and visual echoes from different films over the years. Carax is also interviewed, but never onscreen.

Final Thoughts:
This is the perfect follow-up to Leos Carax's Boy Meets Girl. While it tackles similar romantic concerns, Mauvais Sang is both grander and more intimate. The cast is fantastic, the look is astonishing, the filmmaking is bold and exciting. Carlotta Films' presentation is once again top-notch, with a great-looking and -sounding transfer and impressive supplements. I know I was hesitant to bestow this honor upon Boy Meets Girl, but I would be crazy not to include this disc in the DVD Talk Collector Series. 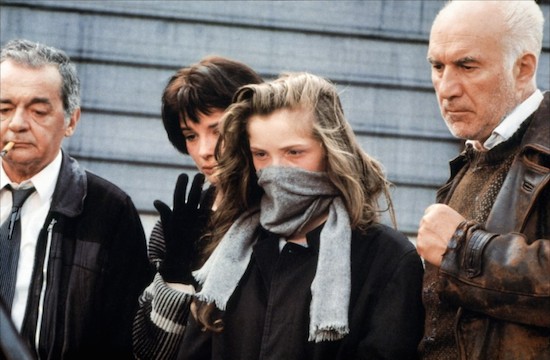