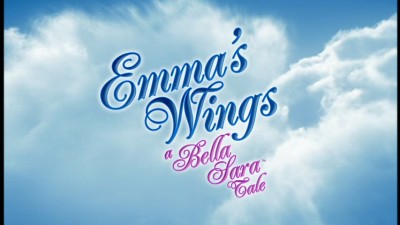 
The Movie
The only reason I have any knowledge of the world of Bella Sara, a collectible card game based in a world of magical horses, is because I have an 8-year-old daughter fascinated by games like Pokemon and the like. She has asked me to buy one pack of Bella Sara cards, and one only. Apparently, one pack of horsey cards was enough to satisfy her curiosity about this world. One would assume she is not alone, as it seems like the last release of Bella Sara cards was in 2012. However that didn't stop the property from making it's way to direct-to-video film, with Emma's Wings: A Bella Sara Tale. (Pay no attention to the title on the box. That's the only place that configuration exists.)

From the cover art, which features the brunette Emma and her flying horse Wings (thus the title) there are probably a number of ways one could imagine the plot of this movie unfolding, mostly in a Barbie or Black Beauty vein. Well, that couldn't be more incorrect, as the actual movie involves were-creatures, otherworldly tales of valkyries, wolf attacks and horses with flaming hooves. Though it never gets super complex or involved, it's definitely a tad darker and more intense than you might surmise from a picture of a girl and her winged horse. Emma's mom apparently was tapped into a universe built around "horse magic" (a real term in the movie) and wrote about the warriors there in a series of popular fantasy books. Well, she's gone now, and her diary has fallen into Emma's hands, but it's being pursued by Myrfor, a shapeshifting wolf working for the evil Ivenna, who wants to take over North of North, the land of the valkyries. At this point, my daughter had given up entirely. To be honest, I half checked out around the second line of dialogue, which was "I need to write a song for Uncle Morgan's eclipse party." My early reaction was very, very right. 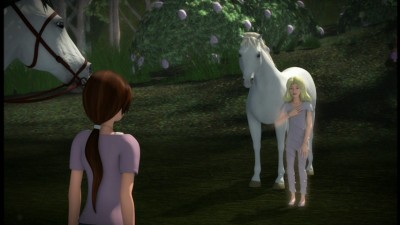 There's a great deal about this film that was frustrating or annoying, be it the ridiculous battles between Emma and her awful cousin Colm, who, as a selfie-snapping pre-teen boy who ruins everything for Emma, is pretty much the worst thing ever, or perhaps the way it ends without any actual ending, just suddenly stopping. It's gravest sins are in the way Emma does her part in the effort to stop Ivenna. Sure, it was telegraphed from the beginning, but when she does her thing, it's just ridiculous, especially with the unmotivated expressions of emotion that are more campier than exciting. There's also the matter of the final act, which is where the climactic battle against Ivenna and Myrfor takes place, and the film pulls off the impressive trick if making it feel like it stretches on forever while very little actually happens. On the plus side, the voice actors are pretty good, and make even the silliest lines of dialogues sound as good as they possibly could.

is another low-budget animated film done with CG, and the results are unimpressive at best thanks to a lack of textures, mostly expressionless faces and weakly animated movement, which makes everything feel awkward and amateurish. At this point, if you're not doing high-end computer animation and you're not doing something interesting visually, the movie will look awful in comparison to all the really great work being done by the big studios (and even some of the smaller shops.) There is no middle ground anymore to the viewer's eyes, unlike in traditional animation (or at least in flash animation made to look like traditional animation.) Too often during this film you'll catch yourself watching limbs moving (or not moving) and wondering what exactly was the goal? (For instance, at one point, a wolf is being dragged along the ground, offering resistance, but it's back legs are rigidly still for some reason. It's not a glitchy mess thankfully (even though there are some moments of error) but it just offers up too many opportunities for distraction. 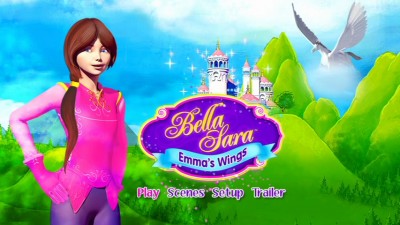 The Disc
Bella Sara: Emma's Wings arrives on one DVD, in a standard white keepcase with a matte-finish slipcover that repeats the cover art. The mildly animated, anamorphic widescreen menu offers a choice to watch the film, select scenes, adjust the set-up and check out the trailer. Audio options include Dolby Digital 5.1 and 2.0 English, while subtitles are available in English SDH.

The Quality
The anamorphic widescreen transfer is lacking in detail, mostly thanks to the animation effort, but the image is also interlaced and suffers from aliasing in many spots. The color is solid, but the overall quality of the image is lacking. Naturally, there are no issues with dirt or damage, but this does not look like a DVD released in 2014.

The Dolby Digital 5.1 fills the rear channels with score and the occasional sound effect (random hooves are heard for no good reason at times) while the front three speakers handle the dialogue, which is rather clean, and actually shows hints of directionality, but nothing major. The low-end is just rather there, with a few exceptions, befitting the film.

The Extras
The only extra is a 1:22 trailer that is distinctly bipolar.. 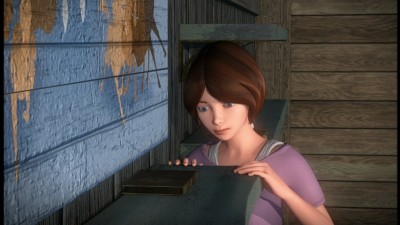 The Bottom Line
With so much quality animation out there to enjoy, it's not worth it to subject yourself (or especially your little ones) to mediocre CG efforts like this one. Maybe if horses are their thing it might be worth a look, but then there's way better equine material available to check out elsewhere also. The DVD looks and sounds fine, and offers little in terms of extra content making this one an easy recommendation to skip.