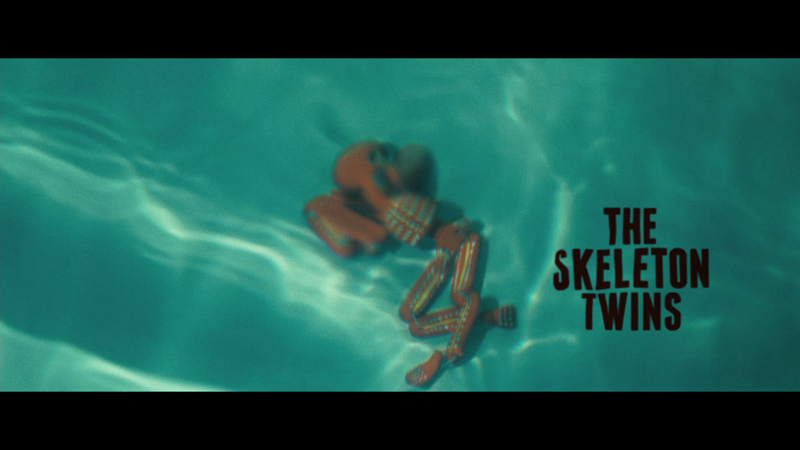 The Movie
I won't go into it again in detail, but I love when a good comedic actor does drama. I think it takes a hell of a lot of talent to pretend to be someone else and make that person funny in a way that's different than being funny as yourself. But for some reason, once you make a living making people laugh, it seems hard to get people to do anything else (see Jim Carrey, Adam Sandler in Punch Drunk Love, so many more.) Now, put together two people known for being funny, but worse yet, best known for being funny together, and the odds against that pairing working in dramatic roles are astronomically high. Thus, we get the meager reaction that greeted Bill Hader and Kristen Wiig in The Skeleton Twins.

The thing is, similar to the roles played by Carrey and Sandler, Hader and Wiig's parts are not straight-up drama. In fact, there are portions of this film that are hilarious. But it sure gets dark as well. Real dark and real quick, as the story of twins Milo (Hader) and Maggie (Wiig) is not happy one, and when we first meet them, if they aren't at rock bottom, they sure are close. A close call brings them together after 10 years apart, and they attempt to heal old wounds, but lack the skills to do so. Their pasts unfold as the film steps cautiously forward, keeping the best bits to only Milo and Maggie's knowledge until they can't help but be revealed. It's not a film about shock or twist endings, as you kind of have an inkling of what's going on, which is what makes the progression of their story so engrossing. 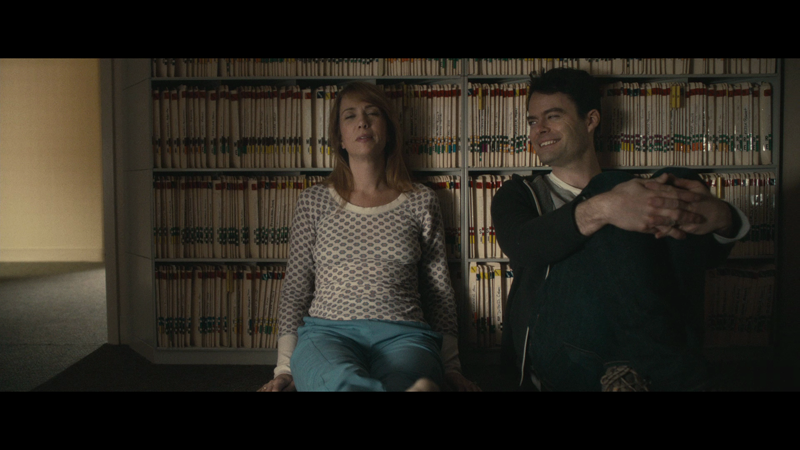 The whole thing really rides on Hader, whose Milo has had something of a rougher ride, and his ability to play wounded-yet-hopeful is the heartbreaking key to the fim. The hallmarks of what has made Hader such a fan-favorite, shy of his most extreme characters, are here, especially that delightful sense of smart-assness that always seems ever-present with him. Wiig, in a meaty little role, continues to show she's tremendously well-rounded as an actress, though she can go darker than Hader, and she does as a damaged woman living to other's expectations and chafing at the restraints. Part of what makes Wiig seem like the "evil" twin is her interactions with her husband in the film, played with chill-bro gusto by Luke Wilson, though honestly, by contrast, anyone would seem like human refuse next to Wilson's endearing performance.

One of the most interesting performances in the film belongs to Ty Burrell, who, like Hader and Wiig, has to compete with his own well-formed comedic image, as the dad on Modern Family. Well... his part here is a bit different than that. To give anything away would be unfair, but suffice it to say, his Rich is a complex character, and you will likely have some issues with him. You see...boy...this one is a toughie. No. Watch it and see for yourself. It's not what you'll expect. That goes for Burrell, Hader and Wiig. They all offer something new, something interesting and something realistically conflicted.

At the helm, Craig Johnson (who co-wrote with Black Swan writer Mark Heyman) turns in a beautiful film, working with DP Reed Morano (Kill Your Darlings), and shows he's got a great hand at getting just the right emotion from talented actors (previously delivering True Adolescents with the ridiculously underrated Mark Duplass, who serves as executive producer here.) Nothing goes to waste, and every moment is imbued with something important, be it a goof-off session in a dentist's office, a quiet dance between siblings or, in what may be the film's signature moment, an utterly enjoyable brother-sister lip sync to Jefferson Starship's "Nothing's Gonna Stop Us Now" (making it two great movies for that soundtrack star [and yes, I mean Mannequin.]) 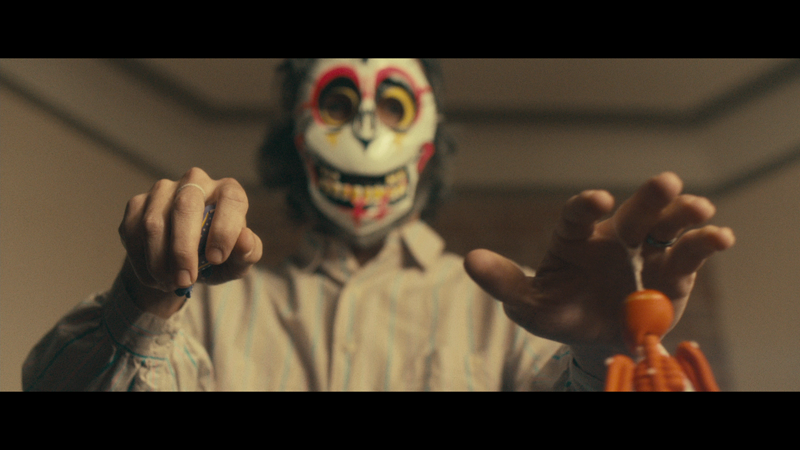 The Disc
The Skeleton Twins arrives on one Blu-ray, packed into a standard Blu-ray keepcase, which itself is inside a slipcover that repeats the cover art. An animated menu offers a choice to watch the film, select scenes, adjust the set-up and check out the special features. Audio options include English 5.1 DTS-HD Master Audio and Spanish 5.1 Dolby Digital tracks, while subtitles are available in English SDH, English and Spanish.

The Quality
The Skeleton Twins looks great in this 2.40:1, 1080p, AVC-encoded transfer, with the muted, somewhat dreamy look of the film coming across beautifully. The level of fine detail isn't exceedingly high for the most part, and some scenes, particularly the darker indoor scenes, can look a little noisy, but overall the film looks solid, with no notable issues with digital distractions. The natural look ties in well with the movie.

This is a very dialogue-driven film, without many opportunities for interesting audio, but when music's in the scene, whether a great soundtrack cut like the Starship song or the excellent score by Nathan Larson, or when there are a few very nice, yet subtle effects, the 5.1 DTS-HD Master Audio track offers up some nice surround speaker implementation. Otherwise, the sound is clear and strong, focused mainly on the center channel, with no concern about distortion.

The Extras
The extras here are nicely in-depth, and, surprisingly funny, considering the film's darker tone. Things get started with a pair of audio commentaries. Up first is Johnson, joined by Hader and Wiig. As one might expect, getting the SNL alums and friends together for a track results in severe silliness, and the effect is Johnson being the dad driving, with Hader and Wiig in the back seat cracking jokes. Johnson does his best to keep things on track, offering lots of production details and insight into decisions made on the film, along with praise for his cast and crew, while Hader and Wiig talk about the props and costumes they took home and curtains. The balance between info and entertainment makes for an enjoyable track.

Johnson returns for the second track, naturally, this time joined by Heyman and producer/editor Jennifer Lee, who is not the Frozen Jennifer Lee (though she has an interesting background herself, which is discussed.) The focus here is the story, going back to its origins and working through to the end, discussing the changes that occurred to the plot over time, with the original idea being drastically different from what ended up on the screen. It's a pretty solid education on writing a film, including a defense of the value of voiceover and thoughts on improvisation, as they step through the film.

Continuing the comedy theme of the extras is the gag reel (3:35), which mainly serves to make one wonder how the film ever completed filming, as Hader and Wiig break on a seemingly constant pace. There's also a set of four outtakes (5:04), which involve some enjoyable attempts at improv, including a ridiculous sex scene with Wiig.

Almost 16 minutes of deleted or extended scenes are available to check out, 13 in all, which include a mix of moments that actually change the movie quite a bit, especially an extended ending that would have resulted in a very different feel. Johnson gets on the nice list by offering optional commentary explaining why the scenes were cut, which, as regular readers know, I feel should be mandatory with deleted scenes.

Wrapping up the extras is a 15:13 behind-the-scenes featurette, "To Whom it May Concern: Making The Skeleton Twins." Interviews with all the principals are mixed with set footage to explore a number of topics around the film, including inspiration, casting and balancing the film's tone.

Also in the package is a code for an Ultraviolet stream/download. 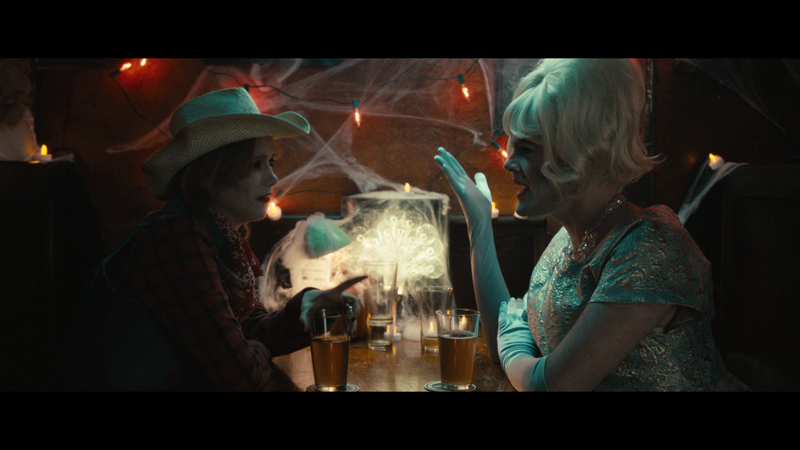 The Bottom Line
This is a movie about the disconnect between the head and the heart and the meaning of family, and with the performances by Hader and Wiig (with assists from Wilson and Burrell) and Johnson's fine orchestration, the results are outstanding, the kind of confident filmmaking that will be remembered far better than it was theatrically received. The Blu-ray looks and sounds great, and has a nice spread of extras that supplement while not exactly fitting the tone. Hader and Wiig fans who are open to a new view of them should absolutely give this a look, as well as any fans of navel-gazing drama laced with generous humor. Burrell fans...well, this may change a few things for you.