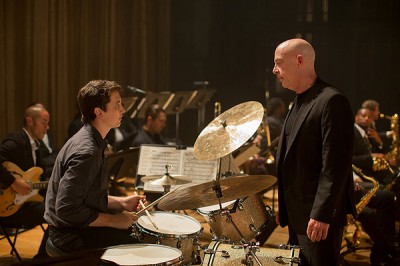 In recent years, there have been multiple viral videos of coaches going ballistic on young athletes, many of which have led to lawsuits and lost jobs. Yet, for a lot of us, the belligerent coach shouting nasty things at his or her players is not that surprising, as it's a regular trope in movies. Famous cinematic coaches are often one step away from trash-talking drill sergeants in army flicks.

Where we are less likely to expect to see similar behavior is in a school band, since the cliché would be that band is where the kids who want to avoid that kind of abuse retreat in search of safe harbor. Even so, artistic endeavors have their own well-meaning bullies behind the scenes pushing their teams forward. Hell, would you bat an eyelash if you heard stories about a director losing his cool and ranting on a film set? He just wants what's best for his movie!

Whether or not writer/director Damien Chazelle was just such a hothead on the set of Whiplash remains to be revealed, but he does put that kind of anger onscreen, as just such a contentious pupil/mentor relationship is at the heart of his second full-length after Guy and Madeline on a Park Bench. Like that movie, Whiplash is about a passionate jazz musician looking to get ahead. In this case, it's Andrew (Miles Teller, Divergent), a drummer attending a prestigious conservatory in New York City. The 19-year-old freshman is desperate to get the attention of the larger-than-life head teacher, Fletcher (J.K. Simmons, Juno, Spider-Man). If Andrew can start drumming in his group, he can drum in the major competitions, a sure way to get noticed by industry bigwigs.

Of course, once Andrew does catch Fletcher's eye, the road to fame is no easier. Fletcher's practice sessions are highlighted by the teacher insulting his students at the top of his lungs, calling into question their talent, dedication, sexuality, ethnicity, and just about whatever else the man can think of. The words are harsh, though at times amusing and scintillating, as well. Simmons, it seems, was born to play such a role. He relishes being able to wield Fletcher's vocabulary with such force. Outfitted in a tight black T-shirt, this headmaster just screams douche on first sight. Like Simon Cowell being possessed by R. Lee Ermey. 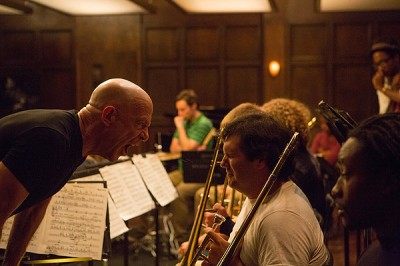 The method to his madness, of course, is to compel Andrew to push harder through a series of manipulative humiliations. This works, though at great cost. Andrew alienates family, foregoes a relationship, and gives up everything to chase the rhythm. He takes over the main drum seat (though the chicanery or happenstance by which this occurs is never fully revealed), and he plows through the obstacles Fletcher puts in front of him, only every time he does, there are only more obstacles on the other side. Something here is going to have to break, right?

Therein lies the rub, and a turn of plot Chazelle never quite figures out. For the first 2/3 of Whiplash, the filmmaker creates a vivid portrait of an insular world, inviting his audience behind closed doors to view a situation that, though familiar in a lot of ways, we haven't really seen before. Fletcher's rehearsal room is much like a locker room or boot camp, with the would-be musicians being browbeaten toward excellence. Teller is actually quite good finding the right mixture of hubris and fear to give us the sense that Andrew has bitten off more than he can chew. He also appears accomplished enough as a drummer to pull it off. Likewise, Chazelle and his team, cinematographer Sharone Meir (Coach Carter) and editor Tom Cross (The Motel Life), have a knack for bringing the audience in close, showing the mechanics of the performances, and creating a visceral montage out of the details. The boy's face, his hands, his sticks, his drums, his sheet music, his cymbals--they juggle all the things he is juggling and it can be dizzying. Particularly in the climactic performance that closes the film.

Unfortunately, there is some third-act silliness on the way to that finale that nearly kicks Whiplash's legs out from under it. After ushering us into the private space of the band room, Chazelle doesn't really know how to open that back up and return his characters to the real world. Structurally, the pre-showtime showdown that will pit apprentice against master has to come mid-way, but Chazelle so oversells the moment there is no clear path back. The fall-out seems cursory and lacking in any meaningful consequence. There's about 20 minutes of moping and machinations that are really just the director taking the quickest possible routes to get his characters where they are going, and these choices sacrifice the motivation and meaning behind what is happening. The revenge stuff is just too cartoony to deliver any great impact. Andrew's epiphany seems neither well earned nor does it add any insight to what the audience will have puzzled out about Fletcher's true tactics long before the boy.

Which can be frustrating. I was getting fidgety in that last half-hour, a fact that wasn't helped by the fact that I really wasn't all that invested in the first 60 minutes. I was skating through on faith that there was something to all this yelling and pounding and blowing of horns. Alas, it turns out it might really have just been noise after all. 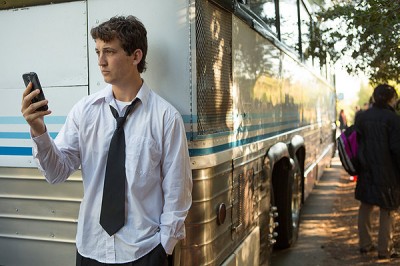