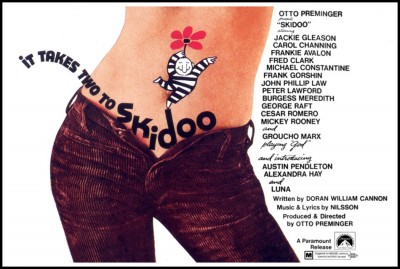 The slang term "23 skidoo" is a reference to making a fast getaway, of getting out while the getting is good. If only someone had walked onto the set of Otto Preminger's 1968 generation-gap comedy Skidoo and shouted "23 skidoo!" just before cameras rolled. Had cast and crew scattered, never to return, a lot of veteran performers could have saved themselves some embarrassment.

Skidoo stars Jackie Gleason as Tough Tony, a one-time mob hitman, now retired. Our lone glimpse of his criminal escapades is shown as a black-and-white silent film in the vein of the Keystone Cops. A throwback to the good ol' days. Just one of many tone deaf jokes about the difference between then and now, the old and the young. Tony's daughter, for instance, has fallen in with a bunch of hippies, and there are lots of zingers about not being able to tell the long-haired boys from the girls. Tony even asks one if one of them is "a faggot." Go ahead and cringe.

While Tony's wife (Carol Channing) embraces the free love counterculture--as should be no surprise, given the running gag about her infidelity and the questionable paternity of their child--Tony is being pressured to rejoin the old organization. His former partner and best friend (Mickey Rooney) is turning state's evidence, and their mutual boss, who goes by the alias God (and is played by Groucho Marx, in his last role), is going to sneak Tony into prison to "kiss" his one-time pal, putting the kibosh on the prosecution's case. Tony is reluctant to do it, even when he's behind bars, but he only gets the gumption to really say no after he accidentally takes some LSD and the bad trip expands his consciousness.

I shit you not. Jackie Gleason sweats and grunts and pretends to hallucinate some of the most cornball psychological psychedelics you've ever seen.

Otto Preminger was around 63 when he made Skidoo, so I suppose that he could be given some credit for trying to address the changing times. I suppose some of the script by Doran William Cannon (Brewster McCloud) could likewise be seen as satirical. The flower power baiting is perhaps intentionally ugly, the old men are supposed to look foolish and passé, as the film ends with the hippies winning and Channing singing a "let's all get along" anthem penned by Harry Nilsson, who does all the music and makes a cameo as a prison guard (and infamously sings the entire closing credits). That's at least somewhat hip.

The problem with the rest of it is it's not very prescient. Nor is it remotely sharp. Skidoo appears to be fueled entirely by flop sweat. Despite a remarkable cast that also includes George Raft, Frank Gorshin, Burgess Meredith, and Frankie Avalon, the group effort generates no comedic steam. When Tony is freaking out, he allegedly obliterates the ego, which seems ironic given the amount of hubris on the screen. Groucho Marx is particularly bad, his jokes are nothing but clunkers. And little is made of the hackneyed "Where is God?" quips, which you'd think would be the easiest commentary of all. The lines just lay there, given equal heft as Tony's cellmate's regular quips about having a problem with all the raping he can't stop doing. I know it was a different time, but I don't think that bit was ever funny.

Skidoo has long had a reputation as a real stinker, to the point that it practically achieved cult status, buoyed by its general unavailability. It was a film folks heard was bad, but few could confirm. My guess is having it back in circulation will only serve to take the polish off this particular lost "treasure." Cinephiles will likely still want to give it a spin to see some giants fall on their faces, but most others will likely have a hard time making it through the full 98 minutes.

Video:
Skidoo is shown at its original 2.35:1 widescreen aspect ratio. Colors are very good, with no evidence of dirt or marks on the print. Resolution is solid, making for a fine presentation of an older movie.

Sound:
The mono soundtrack has an impressive clarity and decent punch.

FINAL THOUGHTS:
Skip It. I've never cared for the "so bad it's good" tag, as I think there are enough genuine efforts in need of reward that monumental screw-ups don't deserve to be canonized, but I don't think Skidoo would even qualify for such a classification anyway. It's so bad it's just outright bad. A bunch of older comedic actors and one of the all-time great directors flip-flopping between shouting "Kids today!" and hurling themselves into the tar pits of history where dinosaurs like them sort of belonged. Not even watching Jackie Gleason go all nutty on acid can save this. For only the most dedicated cinema completists.