Kino // R // January 13, 2015
List Price: $29.95 [Buy now and save at Amazon]
Review by Tyler Foster | posted January 13, 2015 | E-mail the Author
Note: Although screencaps should only be considered an idea of what the disc looks like, click any capture in this review to expand the image to a full size .png. 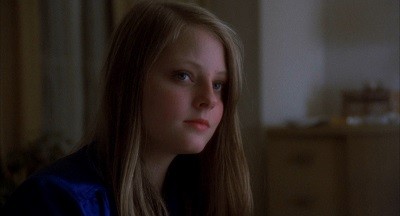 Jeanie (Jodie Foster), Annie (Cherie Currie), Madge (Marilyn Kagan), and Deidre (Kandice Stroh) are four young girls who are only nearing the end of high school, but who act as if they've been adults for ages. Jeanie struggles to see eye-to-eye with her mother (Sally Kellerman), who constantly brings home new boyfriends and is back in college following her divorce from Jeannie's father. Madge is young and naive, a virgin deeply worried about her relative inexperience, a concern that gets her wondering if the much older man she's seeing (Randy Quaid) is The One. Deidre seems to dislike being looked at by her friends as the leader, the one who always has to buy the booze and figure everything out, when she'd rather play head games with people around her. Annie has it the worst, constantly running from her terrifying father, a police officer and domestic abuser who hopes to send her to a mental hospital. They're savvy young women, but their jaded cynicism is put to the test when they try to escape from their parents into a world of adult responsibilities without fully understanding how tough the transformation will be.

Foxes is the debut feature film by director Adrian Lyne, who would go on to direct Fatal Attraction and Jacob's Ladder. A loose, slice-of-life drama, the script by Gerald Ayres seems to be roughly modeled on Saturday Night Fever, chronicling a loose period of time in the lives of a group of young people (the movie even pans past a photo of John Travolta pinned to a character's bedroom wall). It's not a movie about plot so much as atmosphere, one successfully crafted by the combination of Lyne and his talented cast (which also includes Scott Baio, Fast Times' Robert Romanus, Lois Smith, and Laura Dern, in her first screen role). Foxes isn't nearly as good, but the film has a uniquely compelling tone and chemistry, one that pulls the viewer along through some of the screenplay's more contrived moments.

Even 11 years before her star turn in The Silence of the Lambs, with the Freaky Friday youthfulness still plastered all over her face, it's clear that Jodie Foster has something intangible, an air about her that grabs one's attention. For a film about a bunch of high schoolers who believe they're ready to move into the real world, she's got the perfect blend of matter-of-fact intelligence and youthful exuberance. The scenes she shares with Kagan and Stroh generally find her supporting her co-star, but she and Currie have excellent screen chemistry, and there's a powerful dramatic energy whenever she shares the scene with Kellerman. 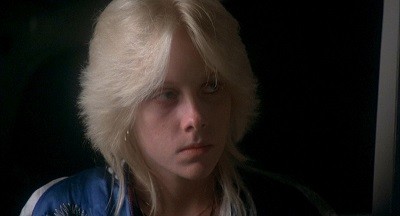 Foxes pulls together a number of stylistic elements in a way that gets the most out of the material, but it's easy to envision Foster as the gravitational core pulling those pieces into a whole.

Currie, possibly more famous as the leader of the rock band The Runaways (whose story was the basis for a movie), makes her acting debut here. For a first-timer, she has strong instincts about how to play the film's most complex character, someone still in the process of putting her junkie days behind her, legitimately terrified of her father and miserable home life, who clings to the support of the other girls, especially Jeanie, like a life raft in a turbulent ocean. For much of the movie, we're able to see the real Annie, a bright young woman no different from her friends, delighting in flirting and looking toward the future like anyone else. It's in stark contrast to her low moments, sullen, quiet moments when Annie visibly retreats inside herself. Many actors would be unable to resist the urge to go bigger, more angry and less afraid, but Currie is heartbreaking in ways the script attempts and fails.

The film drifts in and out of other characters and relationships, including the one between bright-eyed Madge and older, clueless Jay (Quaid), who lets the girls stay in his house while he's away. Brad (Baio) is a younger guy who has feelings for Annie she hasn't decided to reciprocate, who serves as a confidant for Jeanie in a moment when her friends are unavailable. Throughout, the network of often questionable and shady people that Annie knows keep creeping closer to her, trying to get their hooks in. Jeanie fights them off, but it's a full time job. Lyne shoots the film with the same kind of hazy, filtered look that some of his later films would also have, which combines with the late-1970s fashion and culture in a way that makes the film slightly timeless. Everything may be out of date, but the film has a nostalgic quality to it, as if it were intended to be watched by an older audience that would look on it wistfully. The film's climax is contrived, an arbitrary outcome that could've been better integrated into the movie using other characters, but Foxes isn't a story, rather, a distant memory of a feeling slipping away. 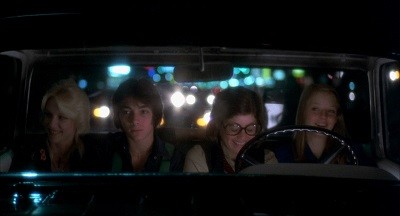 The Blu-ray
Once again, Kino sticks with the film's original theatrical poster artwork for the front cover, a stylish shot of the girls arriving at the concert, with the film's memorable pink logo over them. The back follows their very stripped-down template of white text on a black backdrop with a few photos to accentuate. The one-disc release comes in a Viva Elite Blu-ray case, and there is no insert.

The Video and Audio
Kino Classics' transfers for MGM films have generally hovered between the 3 and 4-star (out of 5) range, and the one MGM have provides for Foxes is probably on the lower end of that scale, attributable to both the scan in question and the photography itself. Presented in 1.85:1 1080p AVC, the film exhibits the smoky, hazy look that Lyne would use in some of his other films, namely Jacob's Ladder. Were this a brand new scan from the negative, that might add depth to the image, but instead, it flattens the picture, with a limited range of detail and clarity. Colors can also seem somewhat drab as a result, especially when it comes to black levels, which are often weak. Grain occasionally turns into compression artifacts (although it's less noticeable in motion than it is in screencaps), and is a constant either way. That said, there is minimal damage to the print and close-ups tend to look good -- there are still plenty of reasons to be pleased by the image.

Some additional screencaps are available here, here, and here.

A DTS-HD Master Audio 2.0 soundtrack sounds fine but is similarly flat and hazy, never quite achieving the separation or vibrancy that some films from the same era are able to offer. Then again, Foxes mostly consists of dialogue, with the occasional rowdy party and car chase to break things up. Most of the newfound nuance in the HD sound goes to the film's soundtrack, which is reasonably rife with rock tunes. English captions for the deaf and hard of hearing are also included. 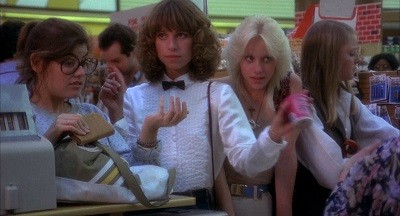 The Extras
Two brand-new extras have been produced for the Blu-ray. The first is a feature-length audio commentary by director Adrian Lyne, who recalls where he was in his career, learning about the culture of Los Angeles teenagers, the look of the film, and working with the cast. He repeatedly mentions the authenticity of the script and the feel of the film as the primary thing that attracted him to the project. He does confess, however, that he's forgotten plenty about the shoot in the intervening 35 years, and there are a number of lengthy pauses while he sits and watches the movie. The track leans more toward trivia and general observations about himself or the people involved than specific details or stories about the movie, which may disappoint some fans, but it's a warm chat when Lyne has something to say, and Kino has to be commended for putting in the effort.

The other new extra is an interview with Sally Kellerman (9:13, HD). She recalls how she became involved with the film and recalls working with Lyne and Foster. An enjoyable little clip.

Conclusion
Foxes doesn't really build to much, ending on a fairly predictable note for the kind of teenage drama that it is, but the rest of the experience is oddly compelling, capturing a unique set of character dynamics and details that have a ring of truth to them. Lightly recommended.